Citrix ADC is an application delivery and load balancing solution that provides a high-quality user experience for web, traditional, and cloud-native applications regardless of where they are hosted. It comes in a wide variety of form factors and deployment options without locking users into a single configuration or cloud. Pooled capacity licensing enables the movement of capacity among cloud deployments.

As an undisputed leader of service and application delivery, Citrix ADC is deployed in thousands of networks around the world to optimize, secure, and control the delivery of all enterprise and cloud services. Deployed directly in front of web and database servers, Citrix ADC combines high-speed load balancing and content switching, HTTP compression, content caching, SSL acceleration, application flow visibility and a powerful application firewall into an integrated, easy-to-use platform. Meeting SLAs is greatly simplified with end-to-end monitoring that transforms network data into actionable business intelligence. Citrix ADC allows policies to be defined and managed using a simple declarative policy engine with no programming expertise required.

The Citrix ADC VPX product is a virtual appliance that can be hosted on a wide variety of virtualization and cloud platforms:

Microsoft Azure is an ever-expanding set of cloud computing services built to help organizations meet their business challenges. Azure gives users the freedom to build, manage, and deploy applications on a massive, global network using their preferred tools and frameworks. With Azure, users can:

Here is a brief description of the key terms used in this document that users must be familiar with:

In the past, an ILPIP was referred to as a PIP, which stands for public IP.

Compared to alternative solutions that require each service to be deployed as a separate virtual appliance, Citrix ADC on Azure combines L4 load balancing, L7 traffic management, server offload, application acceleration, application security, and other essential application delivery capabilities in a single VPX instance, conveniently available via the Azure Marketplace. Furthermore, everything is governed by a single policy framework and managed with the same, powerful set of tools used to administer on-premises Citrix ADC deployments. The net result is that Citrix ADC on Azure enables several compelling use cases that not only support the immediate needs of today’s enterprises, but also the ongoing evolution from legacy computing infrastructures to enterprise cloud data centers.

In an application economy where applications are synonymous with business productivity, growth, and customer experience, it becomes indispensable for organizations to stay competitive, innovate rapidly and scale to meet customer demands while minimizing downtime and to prevent revenue losses.

When an organization outgrows the on-prem data center capacity, instead of thinking about procuring more hardware and spending their capex budget, they are thinking about expanding their presence in the public cloud. With the move to the public cloud, when selecting the right ADC for the user public cloud deployments, scale and performance are important factors. There is always a need to scale applications in response to fluctuating demand. Under provisioning may lead to lost customers, reduced employee productivity, and lower revenue. Right sizing the user infrastructure on demand is even more important in the public cloud where over provisioning is costly.

In response to the need for greater performance and scalability in the public cloud, Citrix ADC remains the best option. The best-in-class solution lets users automatically scale up to 100 Gbps/region and because of its superior software architecture, it delivers a latency advantage of 100 ms on a typical eCommerce webpage compared to other ADC vendors and cloud provider options.

Graceful connection termination. During a scale-in, the Citrix ADC instances are gracefully removed avoiding the loss of client connections.

Better cost management. Autoscaling dynamically increases or decreases Citrix ADC instances as needed. This enables users to optimize the costs involved. Users save money by launching instances only when they are needed and terminate them when they are not needed. Thus, users pay only for the resources they use.

Observability. Observability is essential to application dev-ops or IT personnel to monitor the health of the application. The Citrix ADM’s Autoscale dashboard enables users to visualize the threshold parameter values, Autoscale trigger time stamps, events, and the instances participating in Autoscale.

The following diagram illustrates how the DNS based autoscaling occurs using the Azure traffic manager as the traffic distributor: 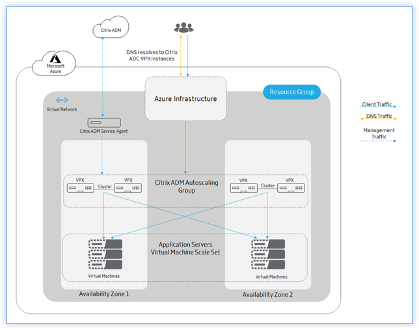 In DNS based autoscaling, DNS acts as a distribution layer. The Azure traffic manager is the DNS based load balancer in Microsoft Azure. Traffic manager directs the client traffic to the appropriate Citrix ADC instance that is available in the Citrix ADM autoscaling group.

Azure traffic manager resolves the FQDN to the VIP address of the Citrix ADC instance.

In DNS based autoscaling, each Citrix ADC instance in the Citrix ADM autoscale group requires a public IP address.

The following diagram illustrates how the autoscaling occurs using the Azure Load Balancer as the traffic distributor: 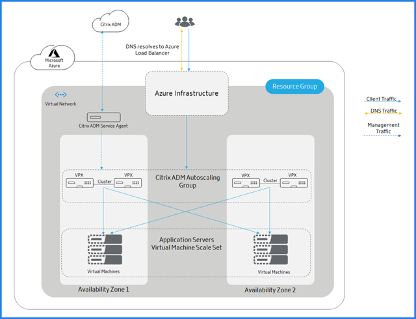 Azure virtual machine scale set is a collection of identical VM instances. The number of VM instances can increase or decrease depending on the client traffic. This set provides high-availability to your applications. For more information, see: What are Virtual Machine Scale Sets?.

An availability set is a logical grouping of a Citrix ADC VPX cluster and application servers. Availability Sets are helpful to deploy ADC instances across multiple isolated hardware nodes in a cluster. With an availability set, users can ensure a reliable ADM autoscaling if there is hardware or software failure within Azure. For more information, see: Tutorial: Create and Deploy Highly Available Virtual Machines with Azure PowerShell.

The following diagram illustrates the autoscaling in an availability set: 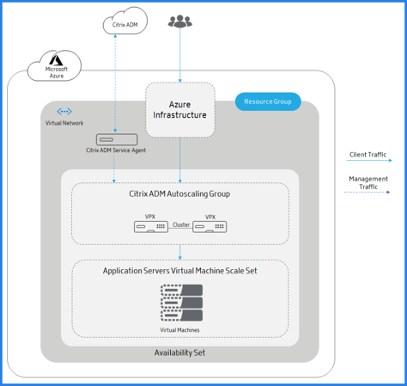 The Azure infrastructure (ALB or Azure traffic manager) sends the client traffic to a Citrix ADM autoscaling group in the availability set. Citrix ADM triggers the scale-out or scale-in action at the cluster level. 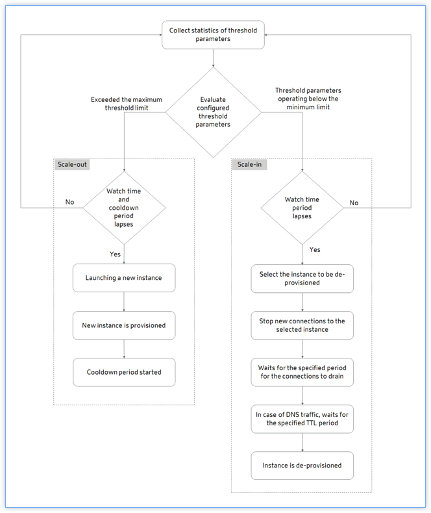 The Citrix ADM collects the statistics (CPU, Memory, and throughput) from the autoscale provisioned clusters for every minute.

Consider that users have created an autoscale group named asg_arn in a single availability zone with the following configuration. 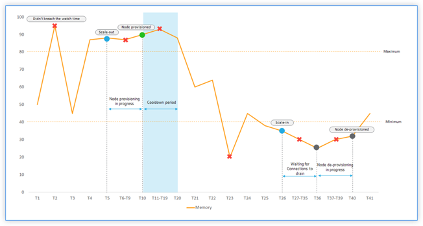 The Sequence of Events

For DNS based autoscaling, Citrix ADM waits for the specified Time-To-Live (TTL) period. Then, it waits for existing connections to drain before initiating node de-provisioning.

The following flow diagram explains the steps involved in creating and configuring an Autoscale group:

For more information on how to create a security group in Microsoft Azure, see: Create, Change, or Delete a Network Security Group.

Create three subnets in the user virtual network (VNet) - one each for the management, client, and server connections. Specify an address range that is defined in the user VNet for each of the subnets. Specify the availability zone in which users want the subnet to reside.

Specify an appropriate security group to the subnet while creating a subnet.

For more information on how to create a subnet in Microsoft Azure, see: Add, Change, or Delete a Virtual Network Subnet.

Subscribe to the Citrix ADC VPX License in Microsoft Azure

Create and Register an Application

To create and register an application in Azure:

For more information on App registrations, see: How to: Use the Portal to Create an Azure AD Application and Service Principal that can Access Resources.

Assign the Role Permission to an Application

Citrix ADM uses the application-as-a-service principle to Autoscale Citrix ADC instances in Microsoft Azure. This permission is applicable only to the selected resource group. To assign a role permission to the user registered application, users have to be the owner of the Microsoft Azure subscription. 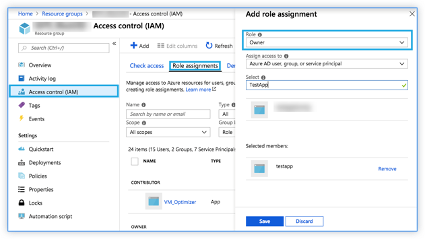 The Citrix ADM service agent works as an intermediary between the Citrix ADM and the discovered instances in the data center or on the cloud.

Create a site in Citrix ADM and add the VNet details associated with the user Microsoft Azure resource group.

Attach the Site to a Citrix ADM Service Agent 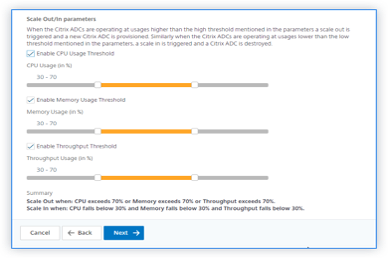 Select one of the following modes to license Citrix ADC instances that are part of the Autoscale Group:

If users choose to use licenses from Azure Marketplace, specify the product or license in the Cloud Parameters tab.

Use Licenses from Citrix ADM

To use this option, ensure that users have subscribed to Citrix ADC with the Bring your own license software plan in Azure. See: Subscribe to the Citrix ADC VPX License in Microsoft Azure.

When the provisioned instances are removed or destroyed, the applied licenses return to the Citrix ADM license pool. These licenses can be reused to provision new instances during the next Autoscale.

Step 5: Configure an application for the Autoscale group

The configuration parameters are pre-defined in the selected StyleBook.

Users can also delete the Autoscale groups after they are created.

When an Autoscale group is deleted, all the domains and IP addresses are deregistered from DNS and the cluster nodes are de-provisioned.

Each template in this repository has co-located documentation describing the usage and architecture of the template. The templates attempt to codify the recommended deployment architecture of the Citrix ADC VPX, or to introduce the user to the Citrix ADC or to demonstrate a particular feature / edition / option. Users can reuse / modify or enhance the templates to suit their particular production and testing needs. Most templates require sufficient subscriptions to portal.azure.com to create resource and deploy templates. Citrix ADC VPX Azure Resource Manager (ARM) templates are designed to ensure an easy and consistent way of deploying standalone Citrix ADC VPX. These templates increase reliability and system availability with built-in redundancy. These ARM templates support Bring Your Own License (BYOL) or Hourly based selections. Choice of selection is either mentioned in the template description or offered during template deployment. For more information on how to provision a Citrix ADC VPX instance on Microsoft Azure using ARM (Azure Resource Manager) templates, visit Citrix ADC Azure Templates.

Users need some prerequisite knowledge before deploying a Citrix VPX instance on Azure:

This section describes the prerequisites that users must complete in Microsoft Azure and Citrix ADM before they provision Citrix ADC VPX instances.

This document assumes the following:

For more information on how to create an account and other tasks, see Microsoft Azure Documentation.

Each ADC instance in the autoscale group checks out one instance license and the specified bandwidth from the pool.

When the provisioned instances are destroyed or de-provisioned, the applied licenses are automatically returned to Citrix ADM.

To monitor the consumed licenses, navigate to the Networks > Licenses page.

The following are the recommended VM sizes for provisioning:

Before configuring NSG rules, note the following guidelines regarding the port numbers users can use:

Thank you for the feedback
Deployment Guide Citrix ADC VPX on Azure - Autoscale
February 2, 2022
Contributed by:
B