Citrix is replacing Personal vDisk (PvD) functionality with Citrix App Layering technology. Use the information in this article to create an App Layering VM that is functionally equivalent to a PvD-based VM.

For information about layers, and the process of creating and publishing image templates, see the Citrix App Layering documentation.

When migrating a set of users who share a PvD image VM, a functionally equivalent App Layering Shared Image VM is created. Each user has their personal profile and settings migrated from their Personal vDisk to their new App Layering User Layer, as illustrated in the following image: 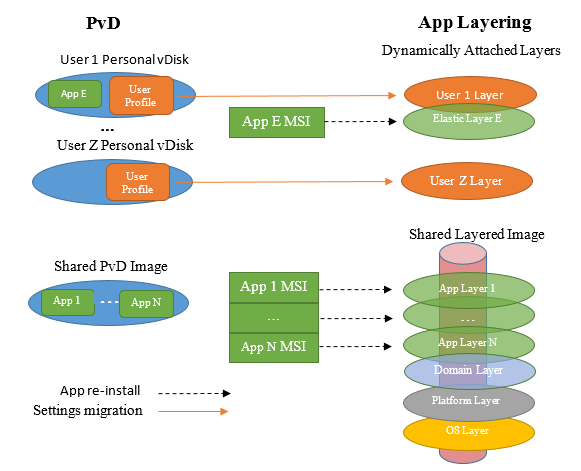 If you are using a different hypervisor or provisioning service, the migration procedures noted in this article are similar.

The examples in this article assume that the user is a member of an Active Directory (AD) domain.

App Layering encourages the clean separation of applications from user-specific information. Applications are located in App Layers, often with one app per Layer, and user-specific information is located in a User Layer. As a best practice, a user would not install an application in their User Layer if they thought the application might have general utility. Instead they would install it in an Elastic App Layer, which would be dynamically attached to their (and others) VMs when they log in.

PvD does not support this clean separation because it has only two layers: the Shared Image, shared by multiple users, and a user-specific vDisk. Users would often install an application in their user vDisk if it was not available in the Shared Image.

When migrating a Shared PvD Image to App Layering you must determine all the applications it contains. For each application (or related set of applications) you create an App Layer. Consider the following:

In the process of creating an App Layering VM, some artifacts are created, including packaging VMs, connectors, agents, and VM templates. These elements are unique to App Layering and are described briefly in the following sections. For a complete description, please see the App Layering documentation.

App Layering’s method for customizing the content of Platform Layers and App Layers is to create a Packaging VM, sometimes referred to as Install Machines. Creating a layer is a six step process:

App Layering does not use a Packaging VM to create the OS Layer. Instead, you create a VM, customize it as needed, and the ELM imports it.

A connector is an object that ELM uses when communicating with some other entity to perform a set of tasks. It is configured with the name, or IP address, of the other entity, the credentials needed to access that entity and any other information required to perform its tasks. For example, a file path on the entity where data is read or written.

Installing the Unidesk Agent on the Citrix Provisioning Server

To migrate a Shared PvD Image to App Layering, you create a Shared Layered Image that is functionally equivalent to the Shared PvD Image. The Shared Layered Image is constructed by publishing an Image Template. The Image Template combines an OS Layer, a Platform Layer and one or more App Layers, each of which you create. These procedures are described in the following sections.

Use the following steps to create an OS Layer.

Create a VM on Citrix Hypervisor. This is the basis for both your OS Layer and your VM Template.

The VM’s OS version should match that of the Shared PvD Image that you’re migrating. In these instructions we assume you are running Windows 7.

From the OS Layer VM:

Make a copy of your OS Layer VM. Delete any local storage. Convert the VM to a Template. You use this VM Template when creating a Citrix Hypervisor connector.

If you are using Citrix Hypervisor and have not yet created a Citrix Hypervisor connector, do so now. When prompted for the ‘Virtual Machine Template’, specify the VM Template you created in the preceding section.

After assigning an Icon and specifying any other detailed information, press ‘Create Layer’. This copies your OS Layer VM into the ELM store and generate your OS Layer.

This completes the creation of your OS Layer, making it deployable.

Once the OS Layer is generated, you can proceed with creating a Platform Layer for the Shared Image.

After assigning an icon and specifying any other detailed information, click Create Layer. This action generates a Platform Layer Packaging VM. Once complete, the creation task’s status indicates ‘Action Required.’

When your Platform Layer Packaging VM is generated, it appears in XenCenter. Perform the following:

If you are using Citrix Provisioning as your provisioning service, you also need to install the Target Device software. To do this:

After installing all platform-related software and making any customizations, click the ‘Shutdown to Finalize’ desktop icon.

Select your Platform Layer’s icon, its status should be ‘Editing’, and click Finalize.

Use the Programs and Features panel to verify all the required applications.

Alternatively you can use the PCmover program, described in the Migration Tools section. It does a good job of identifying applications on a computer. It detects programs that have been installed in some ad-hoc manner, so they don’t appear in ‘Programs and Features’. If used for this purpose, allow it to perform its analysis without actually performing any transfers. Once it has performed its analysis and you have noted all of the Shared Image’s applications, you would simply cancel of PCmover. For details, see the section Using PCmover to Determine Required Applications later in this article.

For many applications it is straightforward to create an App Layer, others require special preparation. Check the various configuration recipes developed by Citrix Solution Architects and by the App Layering community. You find, for example, that there are some applications that can only be installed in a User Layer and not in an App Layer.

For each App Layer, from ELM:

When your App Layer Packaging VM is generated, it appears in XenCenter. Perform the following tasks:

Having generated your OS Layer, Platform Layer and one or more App Layers, you can now proceed with creating an Image Template. Decide which App Layers should be bound into the Layered Image and which should be dynamically assigned to users as Elastic App Layers. Consider:

These two alternatives are mutually exclusive; you should never include an App Layer in an Image Template and also assign it to a user. Doing so is unnecessary and not supported.

Assuming you are using Citrix Hypervisor, you have three types of deployment available:

When creating this type of Connector Configuration you must specify the Citrix Hypervisor address and credentials so ELM can write there, and the target Storage Repository. Also specify the VM Template you created in the preceding section.

A User Layer captures the user’s profile, settings, documents, etc. As described in the following section, this is the target where the Migration Tools transfer all user-specific information from the user’s Personal vDisk.

In the Confirm and Complete panel, click Create Template. This should complete almost immediately.

The final step in generating the Shared Layered Image is to select the Image Template created above and click Publish Layered Image.

Now you can use the normal MCS or Citrix Provisioning management tools to create a Citrix Virtual Desktops machine catalog and Delivery Group:

Citrix recommends that you use one of two tools, PCmover or USMT, to migrate personal information from a user’s Personal vDisk to their App Layering User Layer.

In this article we assume you run PCmover.

At this point you should have taken your original Shared PvD Image and created a functionally equivalent App Layering Shared Layered Image. You have one or more user PvD VMs, each with a Personal vDisk containing user profile and other information that you want to migrate to an App Layering User Layer.

For each such user you start the user’s PvD VM, start the Shared Layered Image, and, on both VMs, log in using the user’s domain credentials and run PCmover.

At this point PCmover starts transferring files and settings from the PvD VM to the user’s App Layering User Layer.

You can use PCmover to analyze a PvD VM and determine the installed applications. This provides an alternative to using the Control Panel’s ‘Programs and Features’.