Deployments that span widely-dispersed locations connected by a WAN can face challenges due to network latency and reliability. There are two options that mitigate those challenges:

Zones in this release are similar, but not identical to zones in XenApp version 6.5 and earlier. For example, in this implementation of zones, there are no data collectors. All Controllers in the Site communicate with one Site database in the primary zone. Also, failover and preferred zones work differently in this release.

A Site always has one primary zone. It can also optionally have one or more satellite zones. Satellite zones can be used for disaster recovery, geographically-distant datacenters, branch offices, a cloud, or an availability zone in a cloud.

The primary zone has the default name “Primary,” which contains the SQL Server Site database (and high availability SQL servers, if used), Studio, Director, Citrix StoreFront, Citrix License Server, and Citrix Gateway. The Site database should always be in the primary zone.

The primary zone should also have at least two Controllers for redundancy, and may have one or more VDAs with applications that are tightly-coupled with the database and infrastructure.

A Site can have satellite zones of different configurations, based on your unique needs and environment. The following figure illustrates a primary zone and examples of satellite zones. 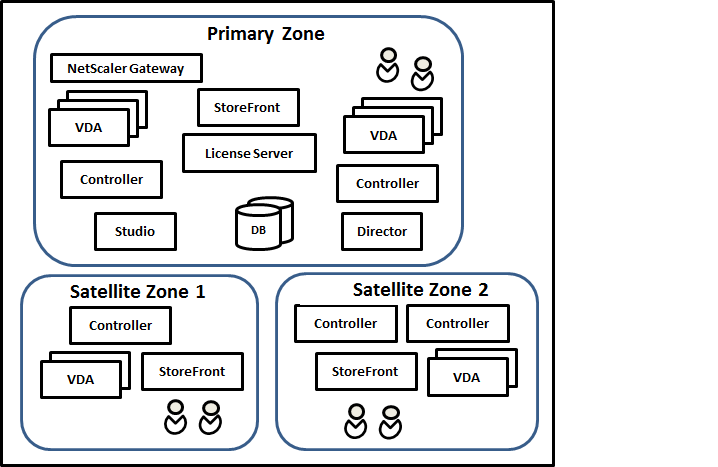 In a Site containing primary and satellite zones, with VDAs at minimum version 7.7: 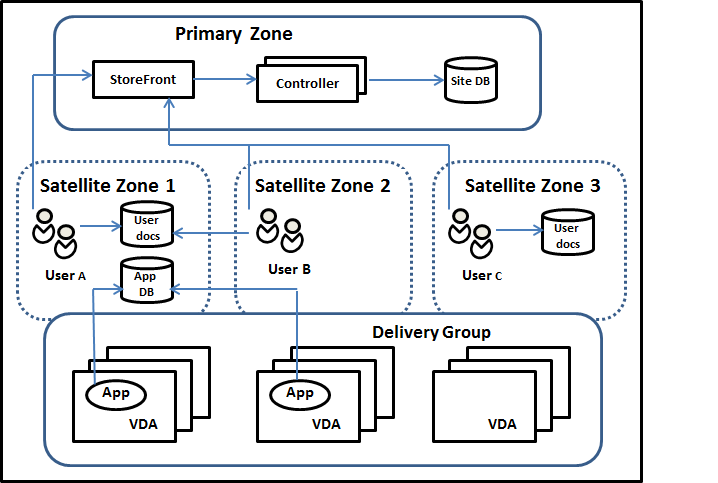 When you configure (or remove) a home zone for a user or an application, you can also further restrict how zone preference will (or will not) be used.

If the user launching an application or desktop already has a session that is suitable for the resource being launched (for example, that can use session sharing for an application, or a session that is already running the resource being launched), but that session is running on a VDA in a zone other than the preferred zone for the user/application, then the system may create a new session. This satisfies launching in the correct zone (if it has available capacity), ahead of reconnecting to a session in a less-preferred zone for that user’s session requirements.

Although zones allow users to be on higher-latency links, providing that there is a local broker, the additional latency inevitably impacts end-user experience. For most work that users do, they experience slowness caused by round trips between Controllers in the satellite zone and the Site database.

A Full Administrator can perform all zone creation and management tasks. However, you can also create a custom role that allows you to create, edit, or delete a zone. Moving items between zones does not require zone-related permissions (except zone read permission); however, you must have edit permission for the items you are moving. For example, to move a Machine Catalog from one zone to another, you must have edit permission for that Machine Catalog. For more information, see the Delegated Administration article.

Remember: When a Machine Catalog uses a host connection to a hypervisor or cloud service, both the catalog and the connection should be in the same zone. Otherwise, performance can be affected. If you move one, move the other, too.

When you add a host connection or create a Machine Catalog (other than during Site creation), you can specify a zone where the item will be assigned, if you have already created at least one satellite zone.

In most cases, the primary zone is the default. When using Machine Creation Services to create a Machine Catalog, the zone that is configured for the host connection is automatically selected.

If the Site contains no satellite zones, the primary zone is assumed and the zone selection box does not appear.

Thank you for the feedback
Zones
August 21, 2020
Contributed by:
C L