A core functionality of StoreFront is the ability to aggregate and de-duplicate “common” application and desktop resources from multiple Citrix Virtual Apps and Desktops (CVAD) Sites. This functionality is commonly referred to as multi-site aggregation. Duplicate applications and desktops are identified based on matching Application Display Name and Application Category properties. This functionality has been available in the console as of version 3.5 and was previously a config file edit. The purpose of multi-site aggregation is to allow Citrix administrators to build redundant CVAD Sites (for scalability or failure domain reasons), yet present a single application or desktop icon to users instead of per-Site duplicates (as would be displayed without this feature). StoreFront then controls how application and desktop launches are distributed across the multiple Sites supporting that resource.

This article reviews how those settings can be implemented in an enterprise environment and how they integrate with other related settings, such as application keywords and subscriptions, to further control how user sessions are routed and resources are presented.

The configuration of multi-site settings is done through the “Manage Delivery Controllers” wizard in the StoreFront console, with various configurations detailed in product documentation. If more than one Site is configured for the Store, the Configure button under “User Mapping and Multi-Site Aggregation Configuration” becomes enabled as shown in the following.

Once selected, an administrator is prompted to configure user mappings and resource aggregation as shown in the following. The “Map users to Controllers” link prompts the administrator to configure a user group to which these settings are to be applied. The “Aggregate resources” link is where the actual multi-site aggregation settings are specified.

Multi-site aggregation cannot be configured until at least one user group has been defined to apply the settings to. The built-in “Everyone” group can be used if a single set of aggregation settings is to be applied to all users who connect to the Store. Once these settings are configured, if a user is not a member of one of the groups specified here, no applications or desktops are enumerated for that user. The next two sections review the available configurations in detail, starting with the “Aggregate resources” options.

In the Aggregate resources section, an administrator is presented with all Sites that are enumerated and prompted to select which have overlapping resources and are aggregated, as shown in the following. 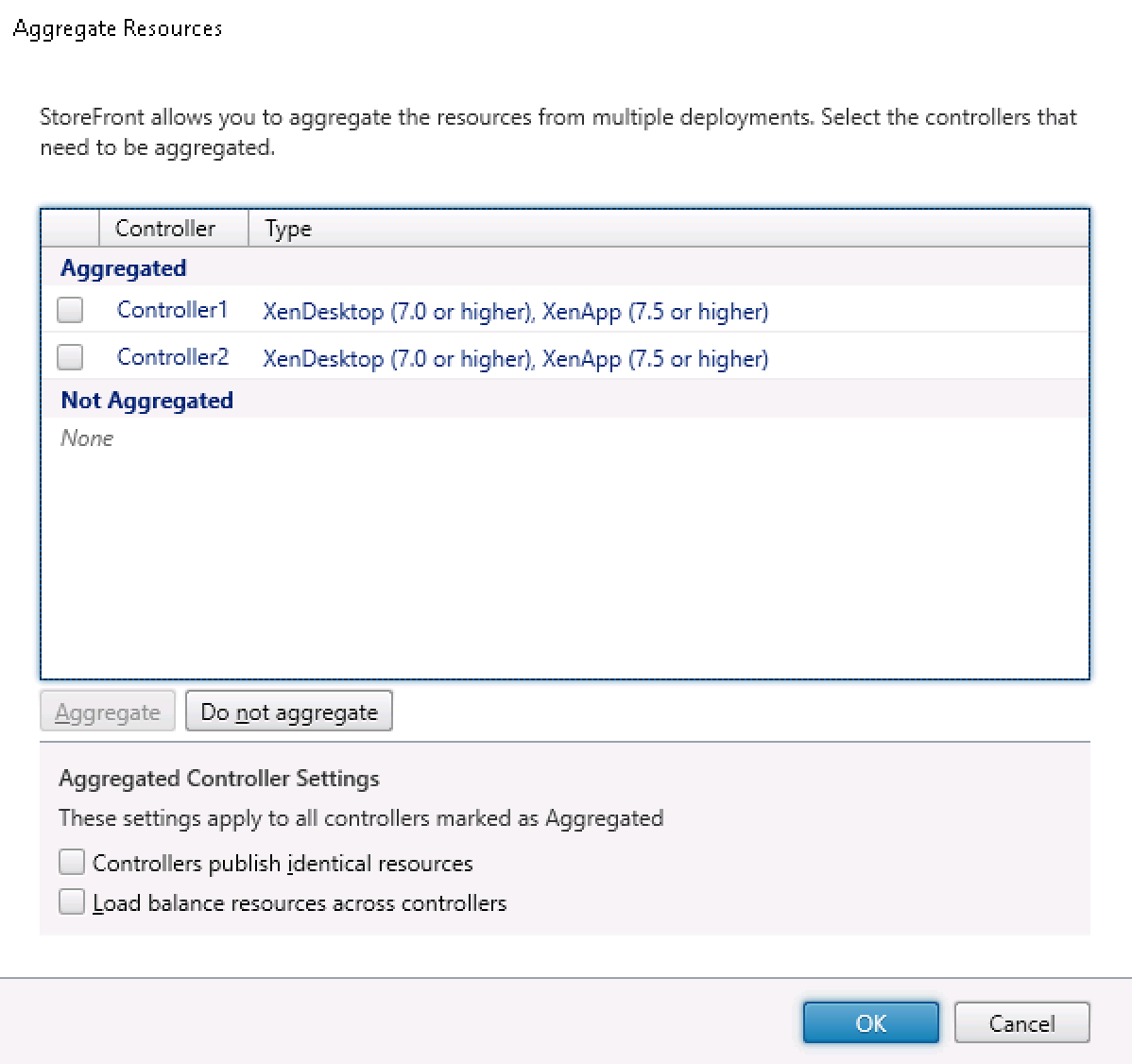 For the aggregated Sites, there are two more configurations that control how resources are enumerated and sessions are launched across those Sites. These settings apply to all Sites marked for aggregation:

Some use cases that are not handled well through the GUI are combinations of load balancing and failover or combinations of identical and non-identical sites. For instance, if there are two production sites that need to be load balanced and one DR site that is only be used if both production sites are down, the GUI cannot be used and the web.config file must be manually modified instead (refer to Citrix Docs for the proper format for this file).

The “Map users to controllers” settings are commonly referred to as “User Farm Mapping” as they are used to control which Sites a given group of users are allowed to enumerate against, whether those Sites are aggregated or not. There are two primary use cases for this functionality:

The “Map users to controllers” first prompts administrators to specify a user group and then the Sites that the user group is assigned to (although the dialog says “Controllers,” it is Sites as defined for the Store). There is a column that denotes whether the selected Sites have been previously configured for aggregation or not as shown in the following. Also, if the aggregated Sites were configured for failover (“Load balance resources across controllers” was left cleared), the order of the Sites can be specified here via the arrows on the right. 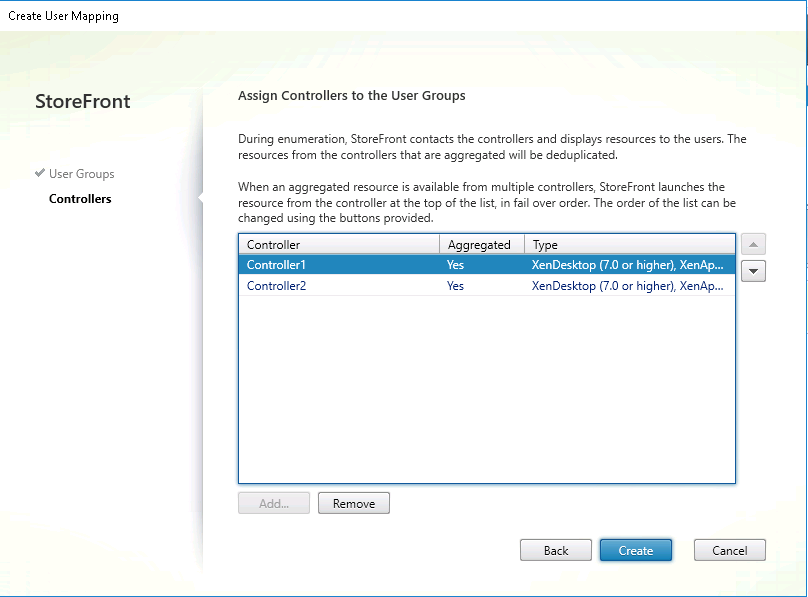 It is possible for a user to be part of multiple user group mappings. When StoreFront reads the list of configured user groups, it does not stop processing after finding a match for a user. All configured groups are processed and all returned Sites enumerated against. This scenario can be expected in the case of Citrix administrators, who typically have access to all applications and desktops and are members of multiple user groups to be able to test and reproduce reported user issues. This just means that administrators (or other users that are members of multiple groups) might experience different launch behavior that users in one of the groups because they have multiple configurations applied to them. Configuration-wise, the only consideration is if two user groups have access to the same set of Sites with different aggregation settings. In the context of an individual user, a Site can only belong to one aggregation group or an error will be displayed. This is resolved by naming the aggregation groups the same between the two user group mappings, which is done by default through the GUI, but can be a consideration if the web.config file is being manually modified for a more advanced set of configurations as previously referenced.

Another way to control resource display and launch is by using keywords in the application description field. Within Store settings, display can be filtered based on custom keywords, as documented in article CTX223451. There are also a few special, pre-defined keywords that have unique functions. Two of these are “primary” and “secondary,” which influence session launch across multiple Sites. When there are two instances of the same application published, the one with the keyword “primary” specified will always be preferred over the one with the keyword “secondary.” This setting overrides any Site aggregation settings covered in the previous sections, which means these settings are frequently used together.

Subscriptions in StoreFront are how users are allowed to “favorite” applications and are stored in a local database on each StoreFront server, replicated automatically across a server group. By default, subscription records are stored in the format <SiteName>.<DisplayName>. This is because StoreFront will by default enumerate resources from all CVAD Sites and display them individually. If two resources happen to be published with the same name in different Sites, subscriptions to them are tracked individually. Therefore, we need some kind of Site tag to differentiate those subscriptions.

To summarize the previous sections: