CompanyA has always used Monolithic architectures to develop system applications predominantly hosted on-premises. They have suffered from issues with uptime and inconsistent performance, particularly for remote users, which was exacerbated during the pandemic. As part of their effort to move to the cloud, they intend to use a Microservices architecture. This architecture allows them to develop new applications with greater resiliency and scalability.

CompanyA decided to build a pair of redundant multi-cloud Red Hat OpenShift (RHOS) clusters. They are hosted in Microsoft Azure and Amazon AWS, with Citrix providing load balancing for microservice instances. This allows them to provide a resilient environment for remote users to access critical business web services with consistently good performance.

This reference architecture explains how CompanyA is planning their environment, to host a cloud-native platform, for developing new applications or migrating legacy ones.

Company A decided to develop their cloud-native microservices-based application delivery with Citrix and RHOS to bring several benefits to their enterprise and ultimately increase productivity.

Cloud-Native applications are developed to take advantage of the distributed and scalable nature of the cloud. It includes many benefits around Enterprise productivity, operational efficiency, and user experience.

For more information, see What is Red Hat OpenShift?

For more information, see: How to accelerate your journey to microservice-based applications

Company A has defined a list of success criteria that formed the basis for the overarching design.

Note: Company A deploys an Apache web service in a production pilot for remote user validation. 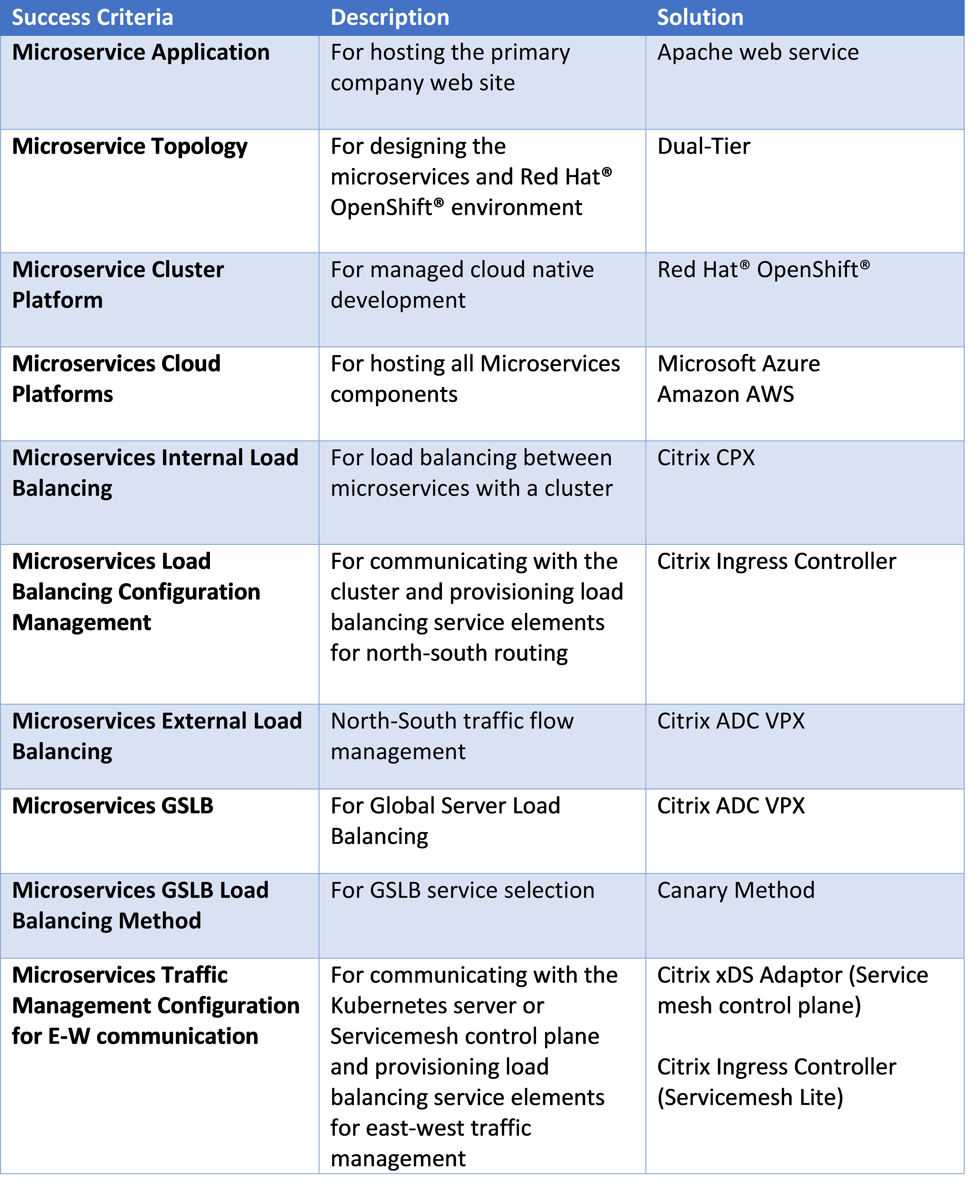 Based on the preceding requirements, CompanyA created the following high-level conceptual architecture. This architecture meets all initial requirements while giving CompanyA the foundation to expand to more use cases in the future.

The architecture framework is divided into multiple layers. The framework provides a foundation for understanding the technical architecture for the microservices infrastructure. All layers flow together to create a complete, end-to-end solution.

At a high level:

Resource Layer: The resource layer specifies the applications delivered to users in the form of microservices in this reference architecture.

Control Layer: The control layer defines how the resources are managed and monitored.

Host Layer: The hosting layer defines the underlying infrastructure that hosts the resources, including memory, storage, and compute.

The User Layer is where users request and access target resources on supported endpoints.

Users can connect to the web service securely using the Citrix Workspace app.

The Access Layer is where network delivery components are hosted to coordinate and direct user sessions requests to Control and Resource components. 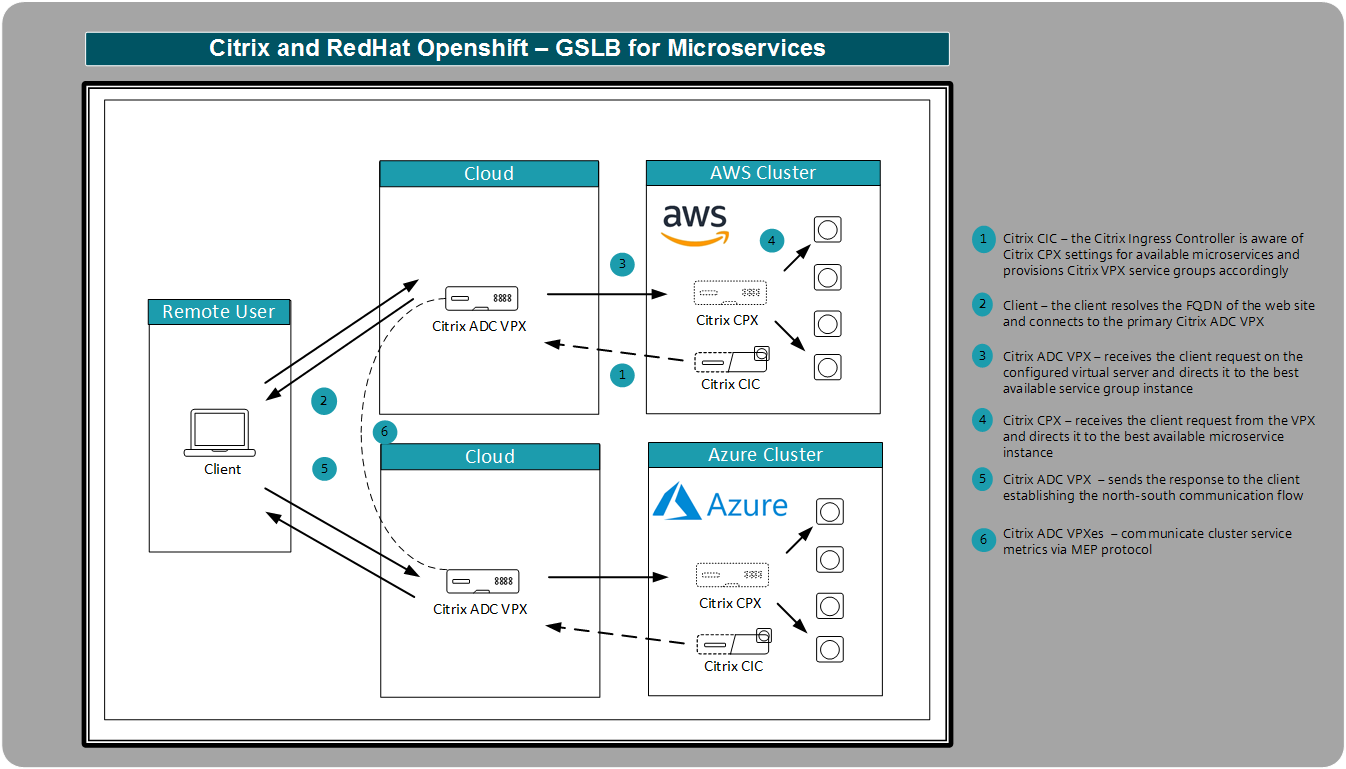 CompanyA decided to implement a 2-tier architecture and use the Citrix CPX to manage the delivery of service traffic within the cluster. The CPX receives user traffic requests from the cloud-hosted Citrix ADC VPX and balances the traffic load between microservice instances. The Citrix CPX is deployed, by the cluster admin, through YAML file configuration using RHOS controls. The Citrix CPX is deployed in both the AWS and Azure clusters in the same manner.

CompanyA decided to use the Citrix Ingress Controller (CIC) to manage Citrix cloud-native networking within their RHOS cluster. The Citrix Ingress Controller is used to manage ingress cluster traffic flow. It uses global cluster custom resource domains (CRDs) to obtain and monitor Citrix CPX and service status. Based on this information, it dynamically configures the Citrix ADC VPX to load balance and route traffic to Citrix CPXes within the cluster.

CompanyA decided to use the Citrix ADC VPX to manage their North-South traffic flows and to implement Global Server Load Balancing (GSLB) between Azure and AWS clusters.

North-South traffic is managed by Citrix ADC VPXes hosted at the AWS and Azure cluster sites, respectively. IP addressing information and access secrets are provided in the CIC setup, allowing it to configure load balancing and content switching policies.

GSLB traffic is also be managed by Citrix ADC VPXes hosted at the AWS and Azure cluster sites, respectively.

Resources include various microservices applications, available through the RHOS Operator Hub, that can be developed internally or obtained through a third-party vendor, depending on requirements. CompanyA has decided to deploy the Apache web application.

The controller layer includes essential management components to coordinate the delivery of microservices.

CompanyA decided to host one of their RHOS environments in a Microsoft Azure tenant. The RHOS cluster used the Azure CLI to build the cluster.

CompanyA decided to host a second RHOS environment in an AWS tenant. The RHOS cluster used the AWS quick start process to build the cluster. 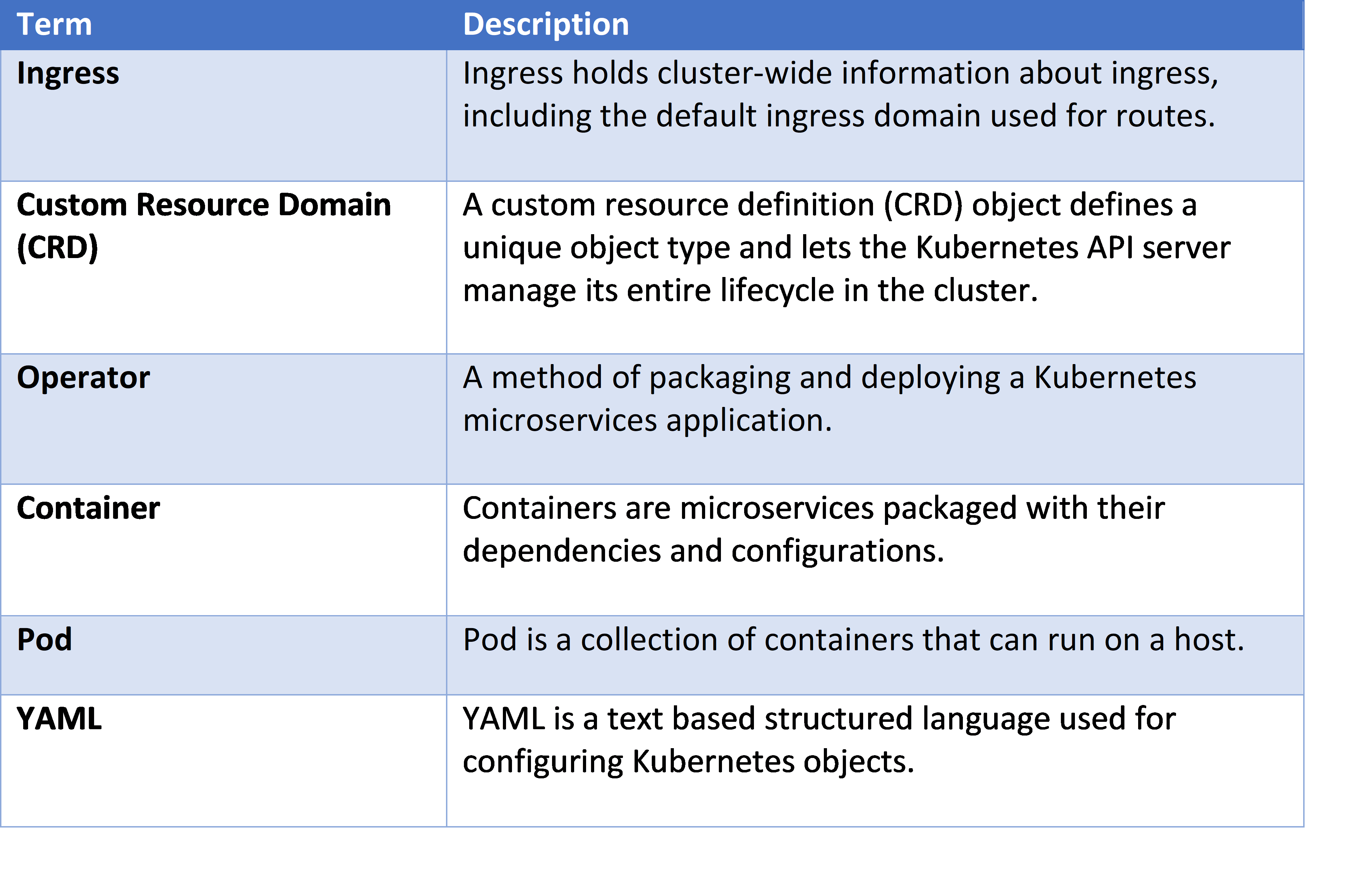