In a Citrix Virtual Apps and Desktops environment, the length of time it takes a user’s action on an endpoint to get sent to the virtual desktop, get rendered and transmitted back to the user’s display determines the responsiveness of the session. This “graphical” round-trip time directly impacts the overall user experience.

Based on tests comparing a traditional routed network versus one using Citrix SD-WAN:

Citrix SD-WAN provides a better user experience than traditional routing when network conditions are not ideal.

SD-WAN seamlessly routes traffic, on a per-packet basis, over the best available path according to quality requirements whether on-premises or in the cloud. Citrix SD-WAN can uniquely analyze the HDX protocol flows, used to transport Citrix Virtual Apps and Desktops sessions. It prioritizes delivery of each packet by class of service to maximize the user experience.

Citrix Virtual Apps and Desktops is heavily reliant on the quality of the network connection between the user and the virtual app or desktop. While Citrix’s HDX technologies and Independent Computing Architecture (ICA) protocol squeezes the best performance possible out of any network, a better network connection results in a better user experience. Citrix SD-WAN can enhance HDX session traffic performance, especially when network conditions are not ideal, with capabilities such as Quality of Service, prioritization, and intelligent steering. The following success criteria were used to evaluate HDX network performance improvements with Citrix SD-WAN:

Citrix HDX technology stack is a set of capabilities that work together to deliver a high-definition user experience on virtual desktops and applications, to any device, over any network, from a central location. Citrix ICA is a proprietary Citrix protocol that provides a detailed framework for passing data between virtual server resources and client endpoints. Therefore, it includes a server component or Virtual Delivery Agent (VDA), a network protocol component, and a client component (Citrix Workspace app).

Therefore, ICA RTT constitutes the actual application layer delay, which includes the time required for the action to traverse the following components:

The ICA RTT counter was used to measure the quantitative HDX performance for each test. It was captured directly on the VDA during each test. The same client and server infrastructure were used for each test iteration. Therefore, only changes made to the network had a relative impact on the ICA RTT measured between tests. 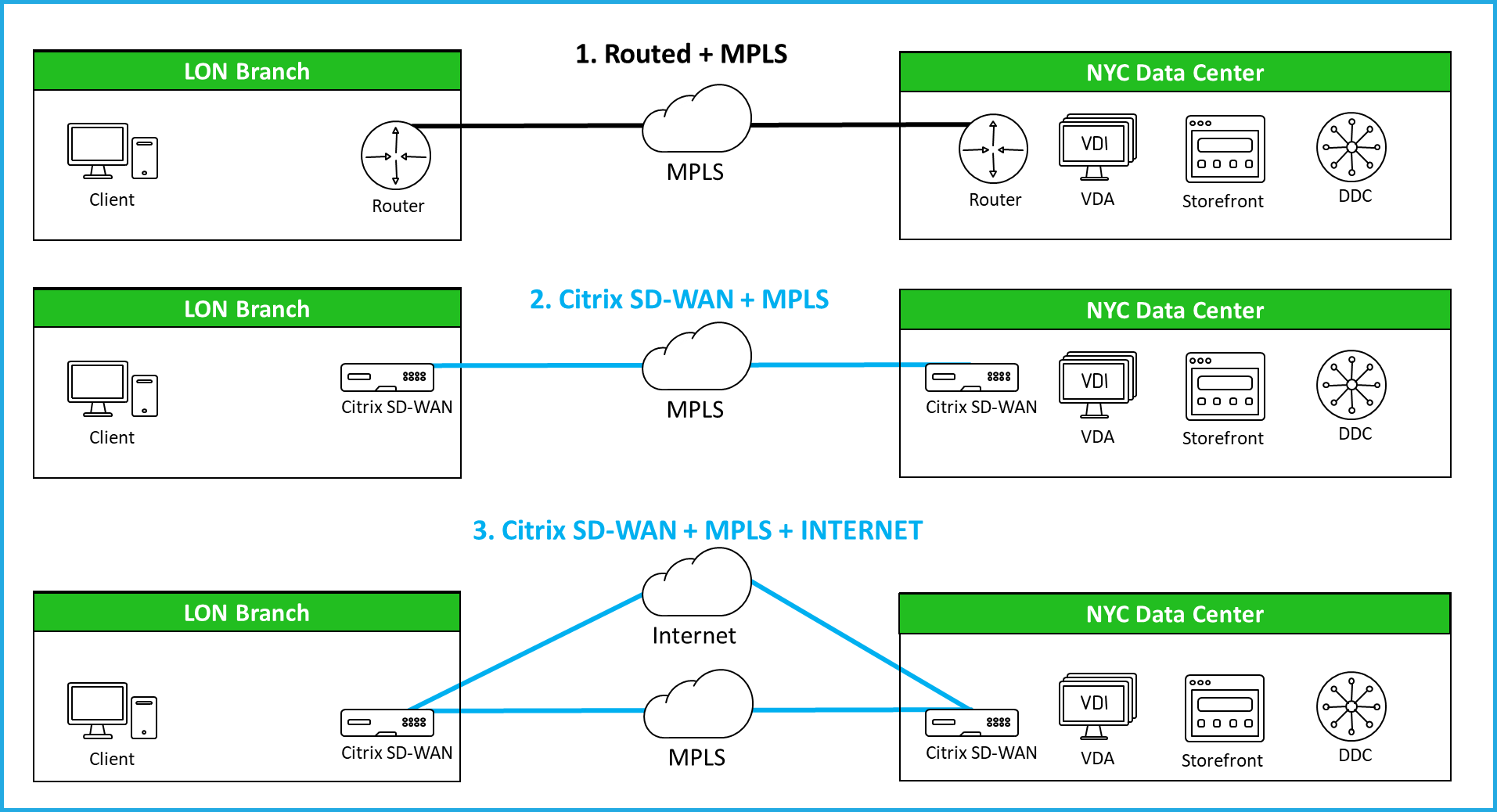 The Citrix Cloud Direct service telemetry is able to monitor customer internet usage and availability. Aggregate customer connectivity reports have shown that the average business Internet connection, in the U.S., is completely down for 3 1/2 hours per month. Reports also show that the connectivity is unusable, or in an “up” state while effectively being “down”, for up to 23 hours per month. The test cases used were designed to replicate network constraints, a small branch office may face, that could cause connectivity issues.

During each test the following actions were repeated to measure and observe the effects of the network constraints:

When reviewing the quantitative results between the topologies Routed + MPLS and Citrix SD-WAN + MPLS, Citrix SD-WAN provided greater than 500% improvement. The improvement came while delivering HDX traffic running video, and a large file transfer, when faced with latency, congestion, and loss, using a single MPLS link. With a second path added, over the INET link, in the Citrix SD-WAN + MPLS + INET topology there was greater than a 4 second reduction in the ICA RTT using the same test scenarios. 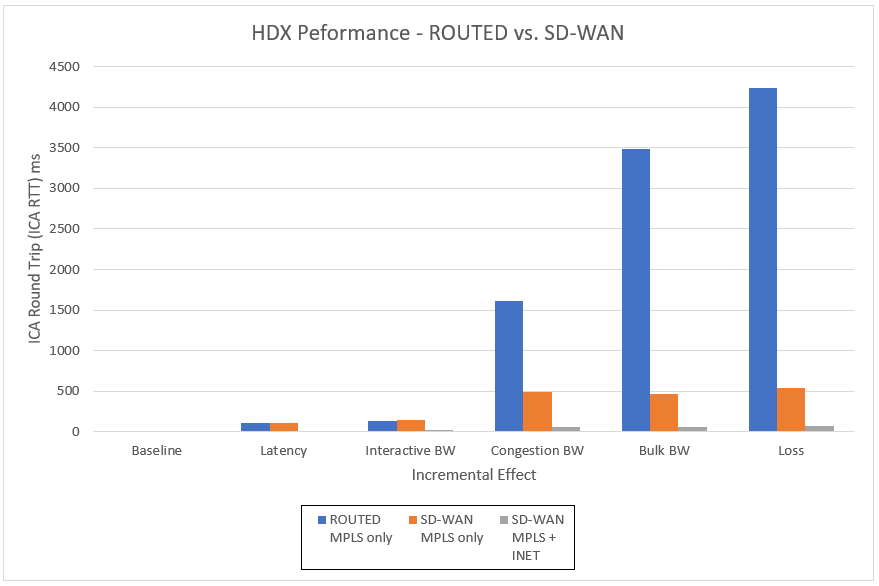 Following are the results and detailed test steps which were used to measure quantitative benefits of delivery with Citrix SD-WAN, versus delivery over a traditional routed network, without Citrix SD-WAN.

ICA RTT was configured for measurement every second by the VDA. For the Interactive BW, Congestion BW, Bulk BW, and Loss tests the RTT varied increasingly due to the growing bandwidth demands, subsequent queue policing, and retransmissions. Therefore, three measurements were captured, and the median value was recorded. Each complete set of tests, for all three scenarios, were further repeated three times and the median value was again recorded as the result.

NOTE: Find a worksheet with a detailed compilation of results here.

The architecture is based on a mock setup with a Windows 10 client, hosted in a London (LON) branch. The client connects to a Citrix Virtual Apps and Desktops VDA, running on Windows Server 2016, hosted in a New York City (NYC) data center. 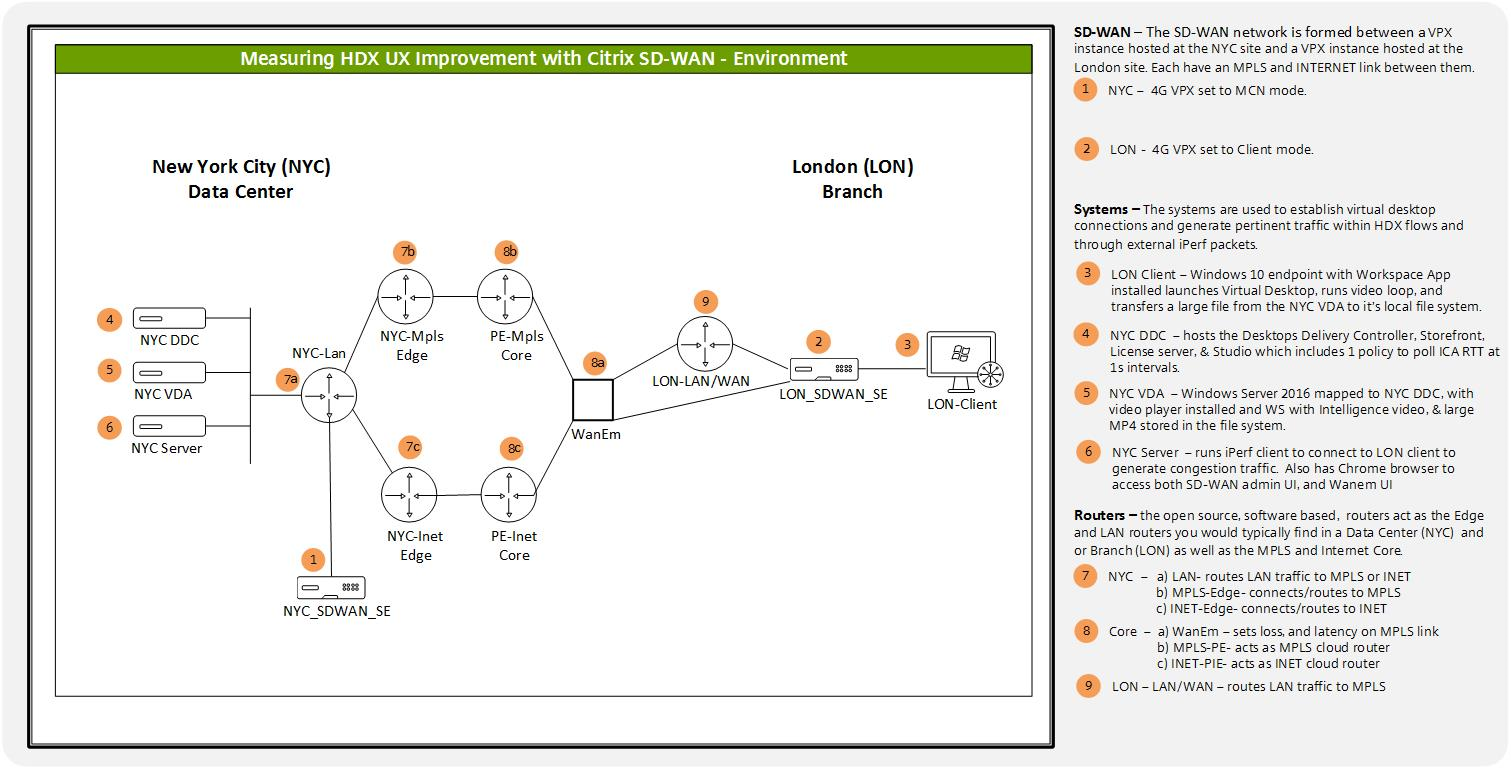 The environment is composed of various software and virtual machines hosted on a Citrix Hypervisor. It is based on an environment that is commonly used for Citrix readiness labs employed for field and events training.

To be hosted within the confines of a 32 GB hypervisor, including supporting management routers and servers, the open source routers used had limited memory. They would typically use more memory in production. However, the SD-WAN virtual paths traverse the same paths and open source routers as the directly routed traffic. Therefore, the absolute measurements should not be referenced, rather the comparative differences that demonstrate quantitative benefits of using Citrix SD-WAN to deliver HDX sessions. The NYC_Lan (Core_Rtr) and LON_LAN/WAN (CE_Rtr) edge routers were allocated the same 4 GB of memory that is allocated to the NYC_SDWAN_SE and LON_SDWAN_SE Citrix SD-WAN instances.

Citrix SD-WAN significantly improves the network performance of Citrix Virtual Apps and Desktops HDX sessions, over environments without Citrix SD-WAN, resulting in a better user experience. This value was demonstrated by measuring the quantitative results of test scenarios with various network constraints.

Two reasons behind the network performance improvements that were observed include: