This Reference Architecture explains how to optimize the delivery of Citrix Virtual Apps and Desktops from on-premises servers to users at locations with a Citrix SD-WAN appliance, by minimizing latency and improving session responsiveness during network issues.

Citrix Virtual Apps and Desktops can deliver virtual apps and desktops sessions to remote user endpoints via Citrix Gateway. When users select a virtual app or desktop in their Workspace App their endpoint is directed to resolve an FQDN. With the public IP address returned they connect to the Gateway via the Internet or VPN.

However, users connecting from a branch with a high speed connection to the Data Center where the virtual workload is hosted typically have a better path with less latency directly over the Enterprise intranet. At the same time, to provide the best user experience Citrix Virtual Apps and Desktops sessions need Quality of Service applied. Depending on the tasks the user is performing, the High Definition User Experience (HDX) sessions can be delivered using separate streams by class of service.

Citrix SD-WAN is a software defined approach to managing enterprise WANs to provide optimal network connectivity between Enterprise branch offices and workloads hosted on-premises or in the Cloud. Citrix SD-WAN can automatically disseminate an HDX session in streams according to class of service between appliance virtual paths and deliver them according to their Quality of Service (QOS)requirements.

Yet, to provide this functionality, Edge SD-WAN appliances must be able to inspect the HDX stream unencrypted. The Workspace client connects to Citrix Gateway, encrypted with HTTPs, for session management including authentication and resource enumeration. However, for app delivery the client must connect directly to StoreFront, and the Virtual Delivery Agent (VDA) it assigns, via the SD-WAN overlay network.

With Citrix Beacons Points, endpoints are provided with a provisioning file including links to test reachability. When “internal” links are reachable they connect directly to StoreFront. It provides the client with the internal address of the target VDA, and subsequently directs the HDX session via the SD-WAN overlay network.

Design Citrix Virtual Apps and Desktops environments with Beacon Points to direct branch endpoints, on the internal network, directly to StoreFront for assignment to the internal address of a VDA for app delivery. Integrate with Citrix SD-WAN so that the HDX sessions being sent over the internal network are automatically separated into multiple ICA streams by class of service, given the appropriate QOS tag, and prioritized accordingly. In this document we discuss the Conceptual Architecture and the Detailed Design of this recommendation. 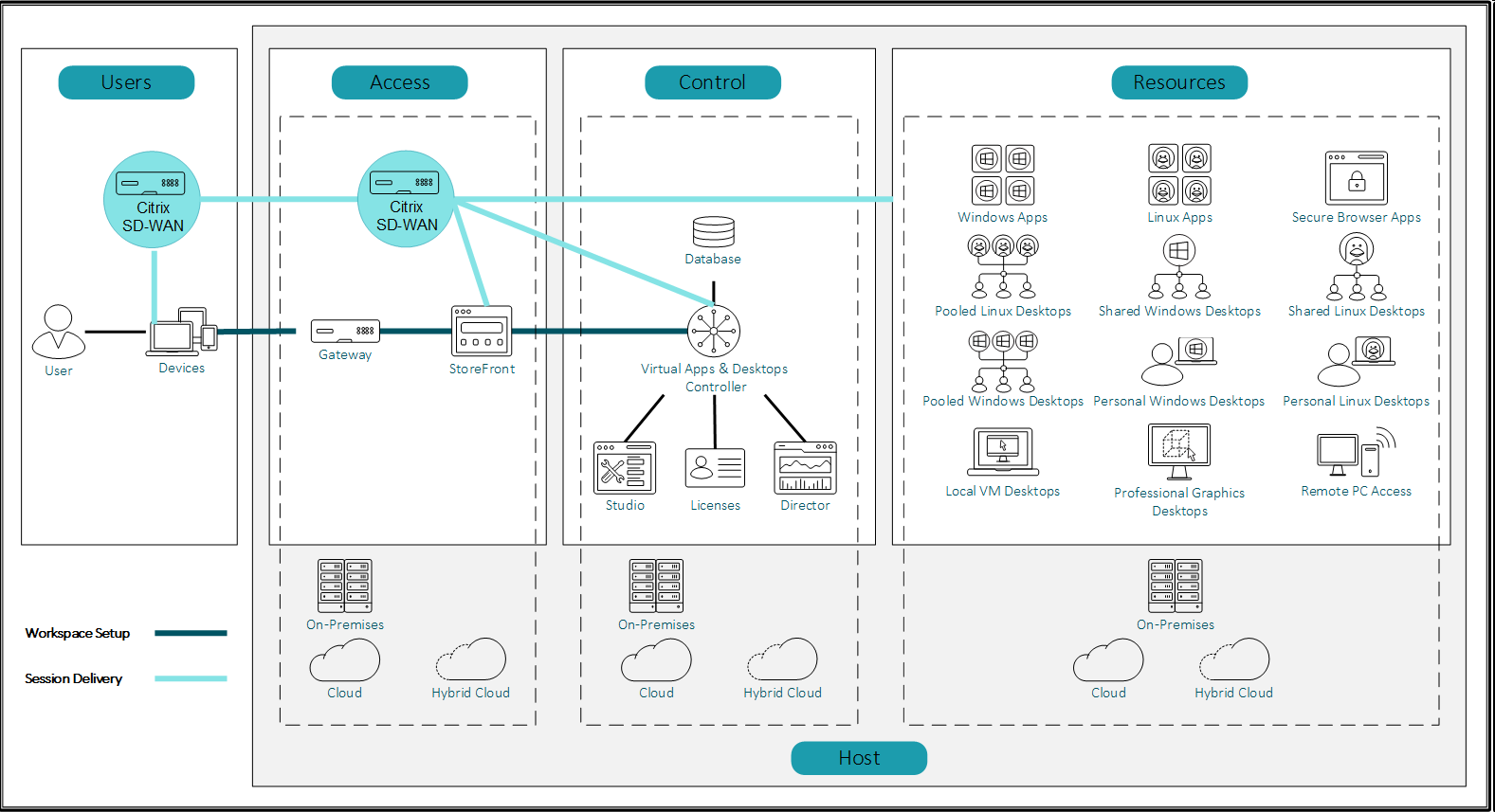 Citrix Virtual Apps and Desktops is built on a modular architecture which allows it to scale and support access on any device, anytime, from anywhere. To best understand the architecture conceptually we consider 5 distinct layers and their pertinent components.

The User Layer is where the supported devices host the Workspace App and users authenticate to obtain their Workspace resources.

The Access Layer is where network delivery components are hosted to coordinate and direct user sessions request to the Control and the Resource components.

The Control Layer includes essential management components to coordinate the delivery of virtual apps and desktops. Thanks to the modular design this essential layer is largely unaffected by user and access layer delivery changes.

Citrix Virtual Apps and Desktops resources come in various shapes and sizes depending on requirements like the operating system and capacity.

Here we discuss session management and delivery flows for two use cases:

Branch users on the internal network as well as remote users that are external authenticate and obtain their resources via Citrix Gateway. The Gateways typically resolve to a common FQDN for all users. Enterprises often host the Gateways in a data center DMZ that resolves to a public IP address reachable via the internet. Enterprises can choose to host a Gateways inside the Data Center network that resolves to an internal private IP address for internal clients.

Remote Users (not on the internal network) route to a Citrix Gateway, from their remote location, to authenticate and obtain their resources.

Branch users route to Citrix Gateway, via the local Citrix SD-WAN appliance through direct internet breakout, to the Citrix Gateway to authenticate and obtain their resources.

During Session Launch is where the flows for Remote Users and Branch Users differ, based on the configuration of Beacon Points.

Branch Users, who are able to reach the internal Beacon Point successfully, are directed to Storefront. It will resolve to an IP address reachable via the SD-WAN overlay network. Subsequenlty, the user’s Workspace App will be given the IP address of a VDA, to establish their session, also reachable via the SD-WAN overlay network.

In this section we discuss detailed design elements of the SD-WAN Overlay Network, Quality of Service, and Beacon Points.

The SD-WAN Overlay Network is built over the available paths between each appliance. A secure tunnel is established on UDP port 4980 and LAN routes are exchanged. Routes can be directly attached or learned, from the underlay network, through routing protocols. SD-WAN routes correspond to service types and, in addition to “virtual path” service routes, they typically include “internet breakout” service routes to direct traffic identified by business application rules to ISP learned internet default routes. 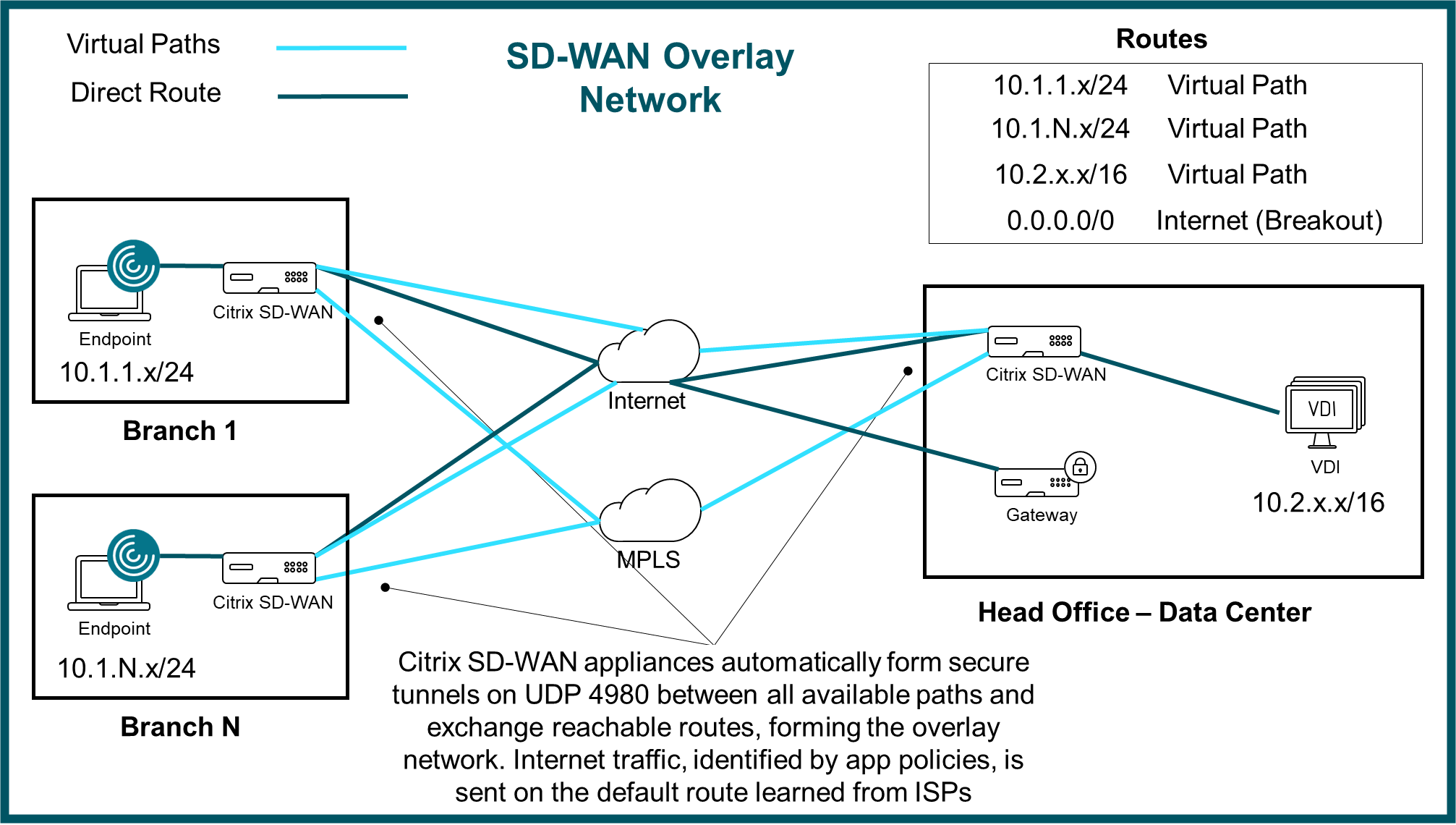 A key differentiator of using Citrix SD-WAN with Citrix Virtual Apps and Desktops environments is its ability to automatically apply Quality of Service to HDX sessions. SD-WAN appliances identify, tag, prioritize, and stream them by class of service. 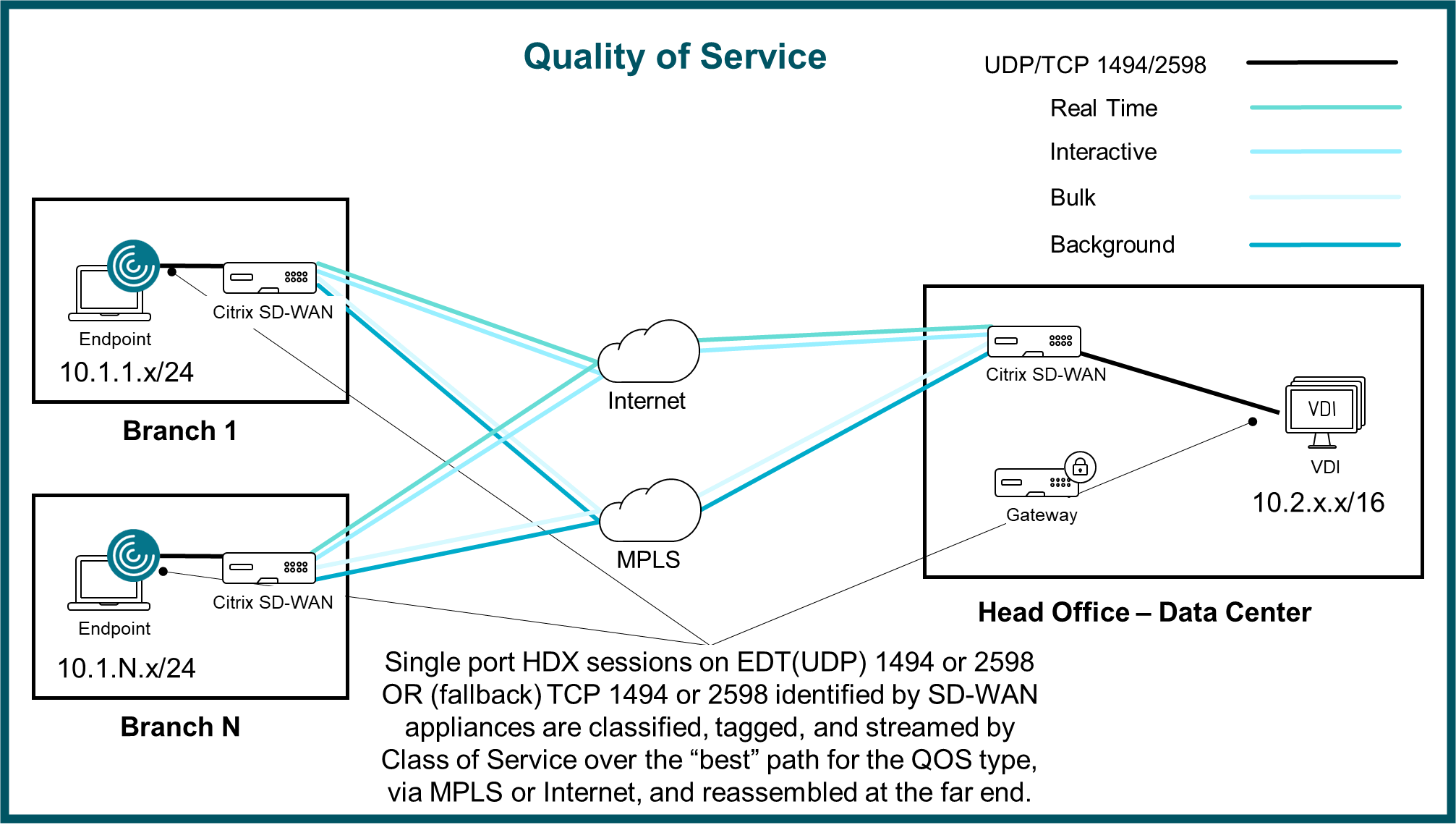 Multi-stream ICA virtual channels types are assigned to the 4 classes shown below by default. In the latest versions of Citrix Virtual Apps and Desktops by default sessions are established using the Enlightened Data Transport (EDT) Protocol. EDT is a UDP based session transport protocol that efficiently adapts transmission according to available bandwidth. It falls back to TCP, and uses its built-in flow control, automatically as needed.

By default, HDX sessions are sent by the VDA on UDP (EDT) port 1494 or 2598 or TCP 1494 or 2598 depending on the session protocol established. (2598 is used when session reliability is configured. Ports can be customized as needed.). The SD-WAN appliance selects the single HDX session and identifies the virtual channel by inspecting the uncompressed NSAP channel, and prepares it for transmission over a Virtual Path. It is supported on most Workspace App platforms.

The streams Virtual Path packets are assigned a tag according to class of service and then are sent to the far end. The tag is used by the SD-WAN appliance to prioritize use of outbound transmission queues, and for path selection which are monitored in real-time for quality metrics. When sent over MPLS, Differentiated Services Code Point (DSCP) tags can be mapped to pertinent queues to allow prioritization in transit across the packet switched network. Typically, real-time traffic is assigned with an Expedited Forwarding (EF) tag, while other traffic is assigned Assured Forwarding (AF) tags in the IP header Type of Service (TOS) field.

Beacons Points enable Workspace clients to determine whether they are on the internal for external network. By doing so they can access StoreFront and have HDX sessions streamed directly from VDAs. This allows SD-WAN to inspect session flows unencrypted and apply QOS automatically to optimize performance. 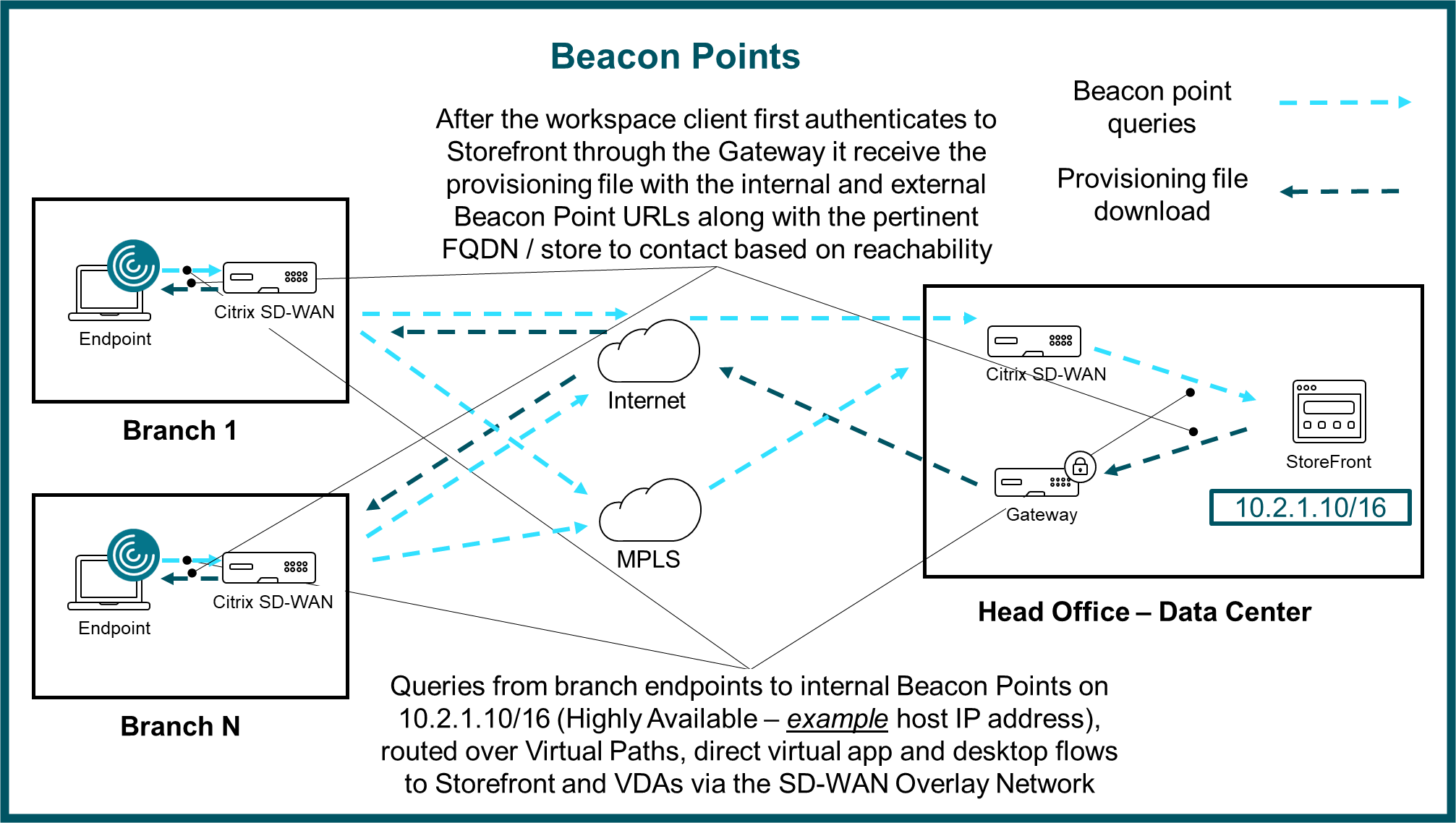 Beacon points are configured in the StoreFront admin interface under Stores > Manage Beacons. They are entered as a URL. 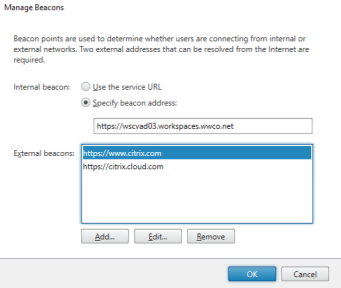 Provisioning files represent the Beacons Points in XML format. In our example they are delivered from StoreFront, via the Gateway, to the endpoint and consumed by the Workspace app to utilize Beacon Point instructions.

Focusing on the goal of the document to provide guidance on optimal use of Citrix SD-WAN, with Citrix Gateway, in a Citrix Virtual Apps and Desktops environment we discuss pertinent hardware, software, and key configuration elements.

Citrix SD-WAN can be deployed in various topologies for various use cases. To ensure it can deliver, and enhance the performance of virtual app and desktops sessions, the overlay network must be designed so that the internal beacon points are reachable, by all branch clients. For comprehensive guidance on planning implementations complete with use cases, and recommendations see Citrix SD-WAN Reference Architectures

Citrix Gateway has been implemented optimally with Citrix Virtual Apps and Desktops for over a decade and is well documented. For more information see: Integrate Citrix Gateway with StoreFront

StoreFront is also a well-documented component of Citrix Virtual Apps and Desktops environments. It is typically hosted on a hypervisor, in the data center, on the internal network. Most environments have a store configured for internal users and external users integrated with Citrix Gateway. We make this assumption, therefore there are limited configuration changes to consider integrating with the Citrix SD-WAN network.

Citrix Virtual Apps and Desktops features and functionality has expanded over several decades and is well documented.

Citrix Design Decisions guides can help you make optimal decisions regarding the configuration, optimization, and deployment of your solution. For more information see Citrix Virtual Apps and Desktops Design Decisions.

Citrix SD-WAN can allow all LAN traffic, or filter according to Enterprise security policy with an onboard firewall. It can also be used to do full stack inspection. For more information see Citrix SD-WAN Security.