Citrix DaaS service supports zone selection on Google Cloud Platform (GCP) to enable sole-tenant node functionality. You specify the zones where you want to create VMs in Citrix Studio. Then use Sole-tenant nodes allow to group your VMs together on the same hardware or separate your them from the other projects. Sole-tenant nodes also enable you to comply with network access control policy, security, and privacy requirements such as HIPAA.

You must have existing knowledge of Google Cloud and Citrix DaaS for provisioning machine catalogs in a Google Cloud Project.

To set up a GCP project for Citrix DaaS, follow the instructions here.

Sole tenancy provides exclusive access to a sole tenant node, which is a physical Compute Engine server that is dedicated to hosting only your project’s VMs. Sole Tenant nodes allow you to group your VMs together on the same hardware or separate your VMs. These nodes can help you meet dedicated hardware requirements for Bring Your Own License (BYOL) scenarios.

Sole Tenant nodes enable customers to comply with network access control policy, security, and privacy requirements such as HIPAA. Customers can create VMs in desired locations where Sole Tenant nodes are allocated. This functionality supports Win-10 based VDI deployments. A detailed description regarding Sole Tenant can be found on the Google documentation site.

To reserve a Sole Tenant Node, access the Google Cloud Console menu and select Compute Engine and then select Sole-tenant-nodes: 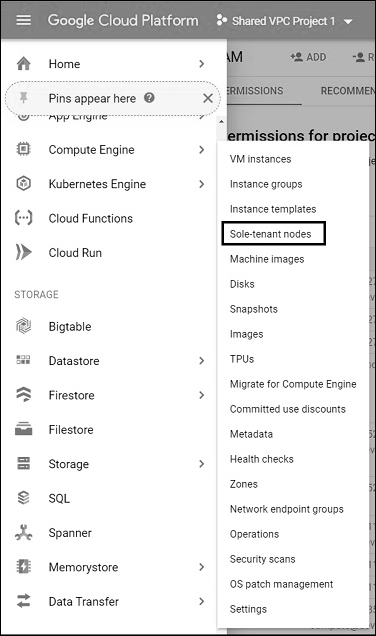 Sole tenants in Google Cloud are captured in Node Groups. The first step in reserving a sole tenant platform is to create a node group. In the GCP Console, select Create Node Group:

Start by configuring the new node group. Citrix recommends that the Region and Zone selected for your new node group allows access to your domain controller and the subnets utilized for provisioning catalogs. Consider the following:

All node groups are associated with a node template, which is used to indicate the performance characteristics of the systems reserved in the node group. These characteristics include the number of virtual CPUs, the quantity of memory dedicated to the node, and the machine type used for machines created on the node.

Select the drop-down menu for the Node template. Then select Create node template: 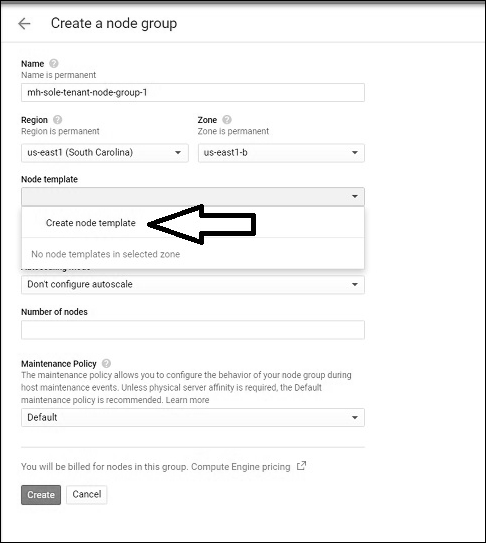 Enter a name for the new template. For example, mh-sole-tenant-node-group-1-template-n1.

The next step is to select a Node Type. In the drop-down menu, select the Node type most applicable to your needs.

You can refer to this Google documentation page for more information on different node types.

Once you have chosen a node type click Create: 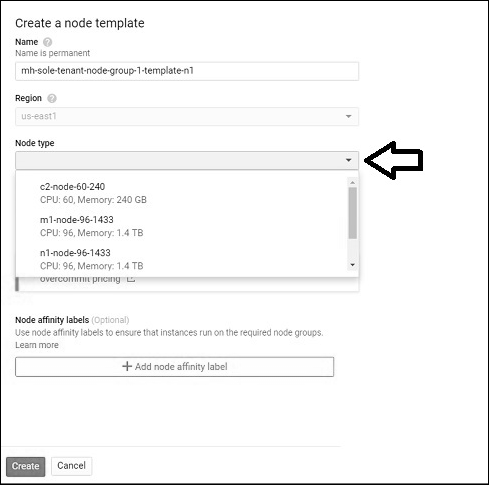 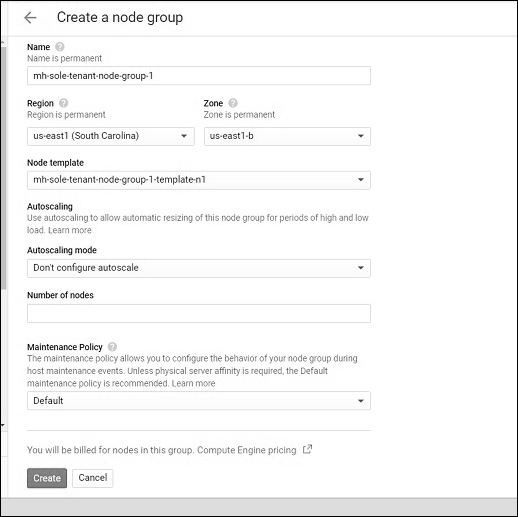 For the catalog creation process to deploy machines on the sole-tenant node extra steps must be performed when creating and preparing the machine image from the provisioned catalog.

An example of both approaches follows.

This section does not cover all the steps necessary for creating a GCP Instance. It provides sufficient information and context for you to understand the process of setting the Node affinity label. Recall that in the examples above, the node group was named mh-sole-tenant-node-grouop-1. This is the node group we need to apply to the Node affinity label on the Instance.

The new instance screen appears. A section for managing settings related to management, security, disks, networking, and sole tenancy appears at the bottom of the screen.

To set a new Instance: 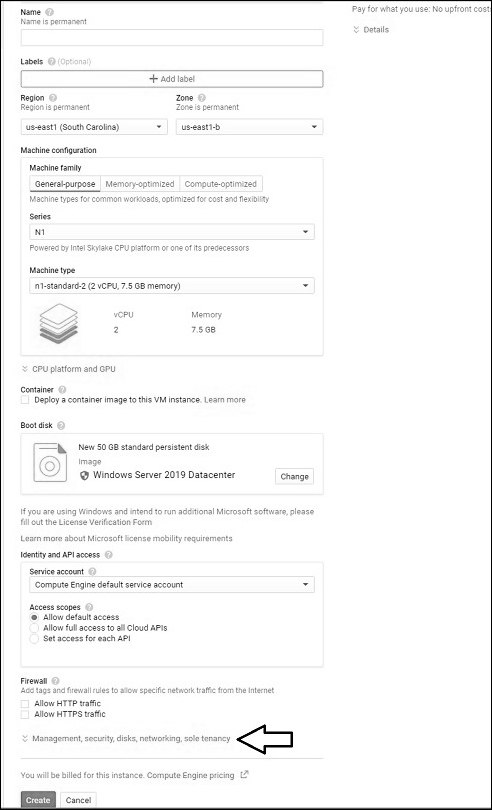 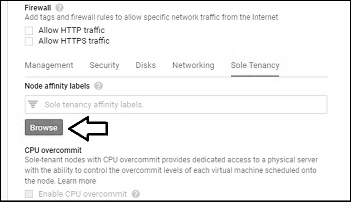 The Google Cloud Project used for these examples contains one node group, the one that was created in the earlier example.

To select the node group: 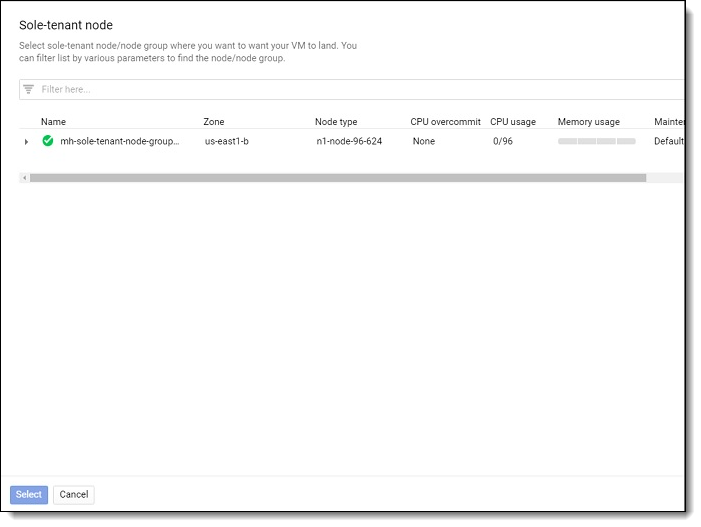 After clicking Select in the previous step you are returned to the Instance creation screen. The Node affinity labels field contains the needed value to ensure catalogs created from this master image are deployed to the indicated node group:

Set the node affinity label for an existing instance

To set the Node affinity label for an existing Instance, access the Google Cloud Shell and use the gcloud compute instances command.

More information about the gcloud compute instances command can be found on the Google Developer Tools page.

Include three pieces of information with the gcloud command:

How to open the Google Cloud shell

The buttons appearing in the following image are present at the top right of the Google Cloud Console window. Click the Cloud Shell button:

When the Cloud Shell first opens it looks similar to: 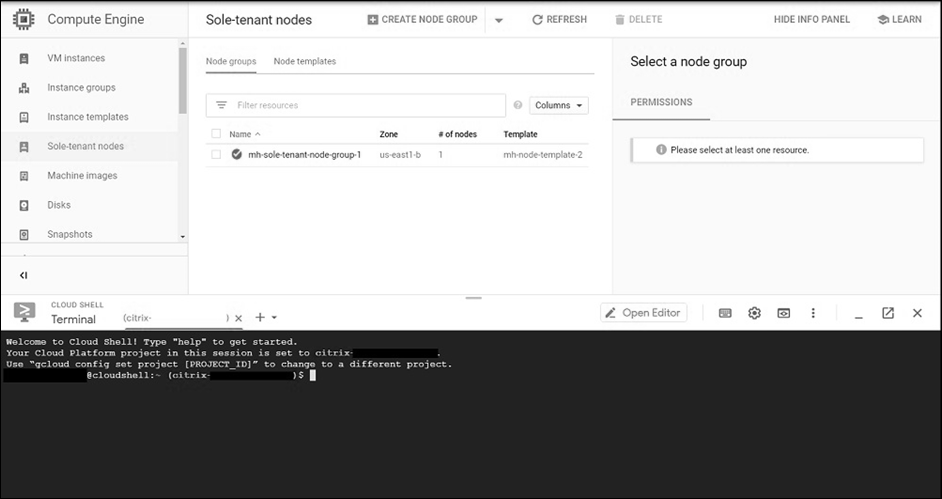 Use the gcloud command to set the node affinity label

Run this command in the Cloud Shell window:

Finally, verify the details for the s2019-vda-base instance: 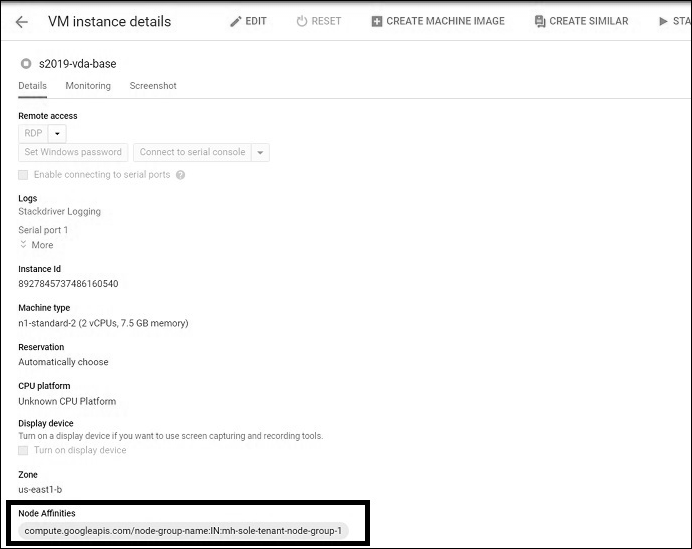 After performing the previous steps in this document, you can create a machine catalog. Use the following steps to access Citrix Cloud and navigate to the Citrix Studio Console. 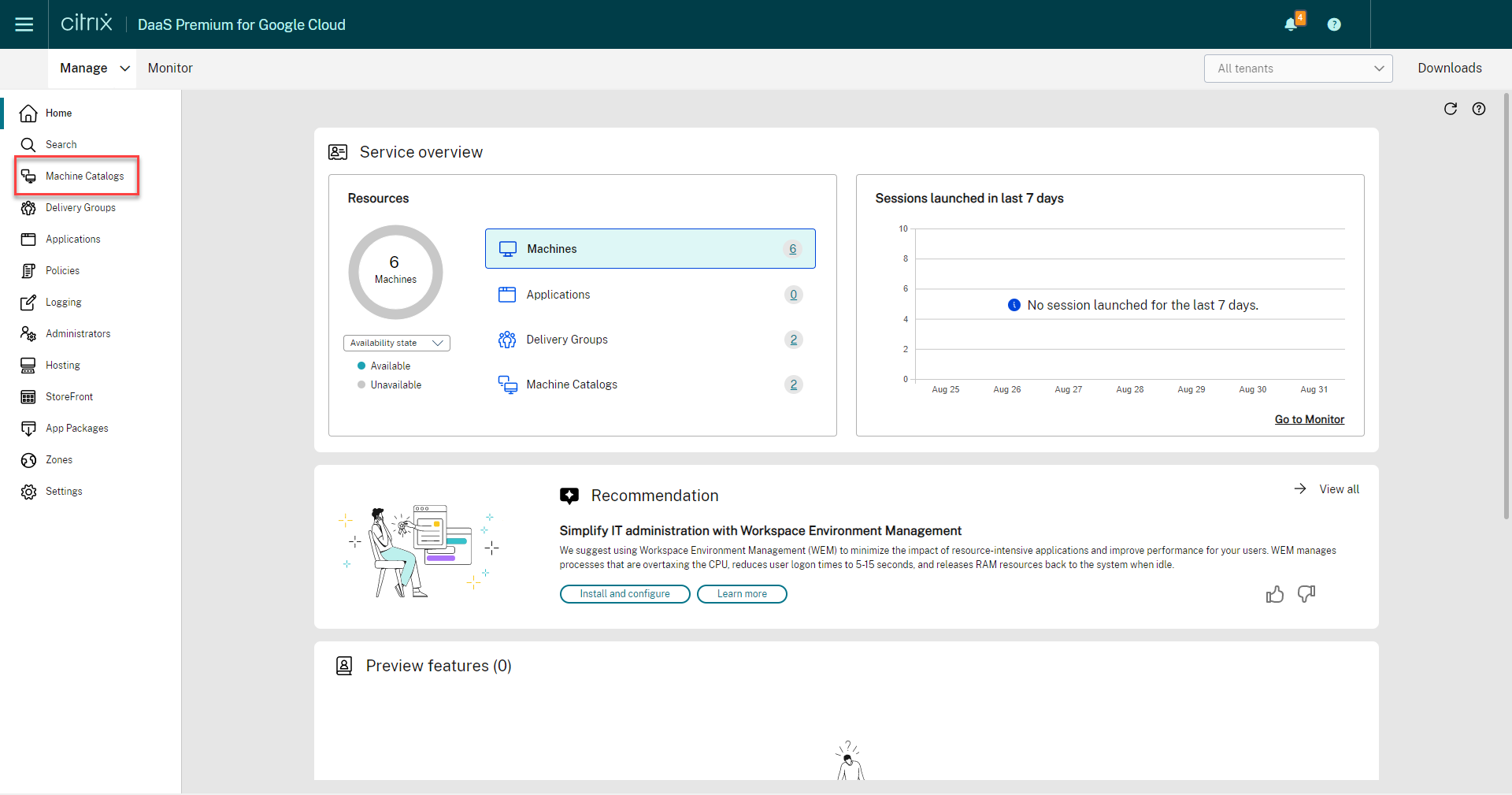 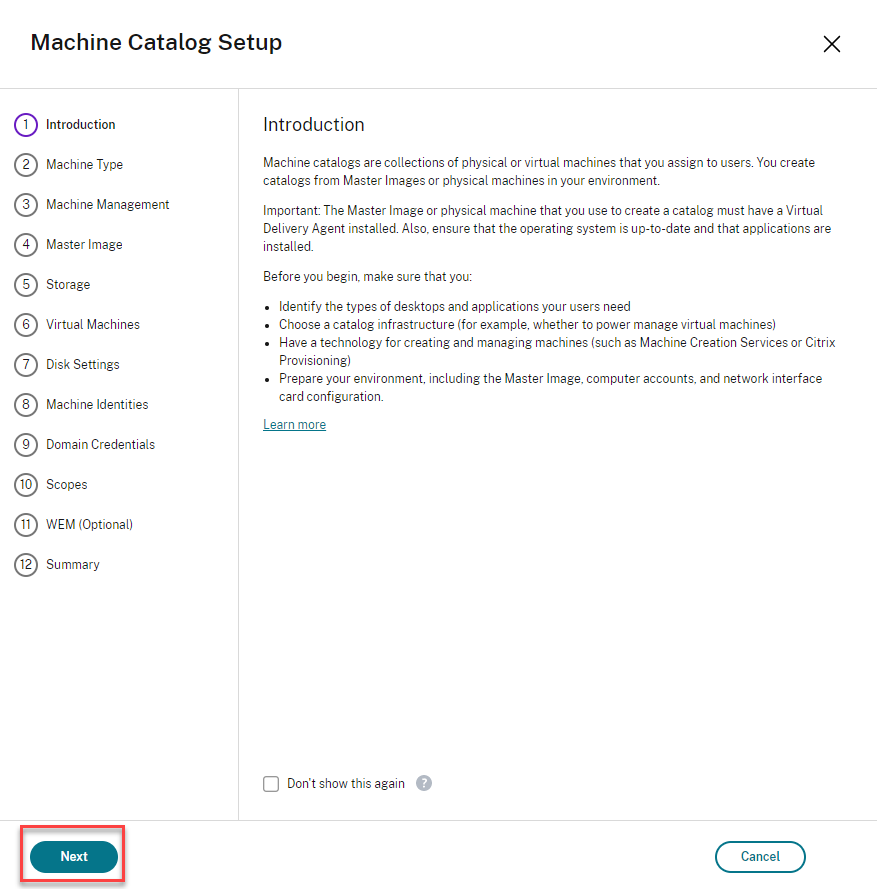 Select an operating system type for the machines in the catalog. Click Next: 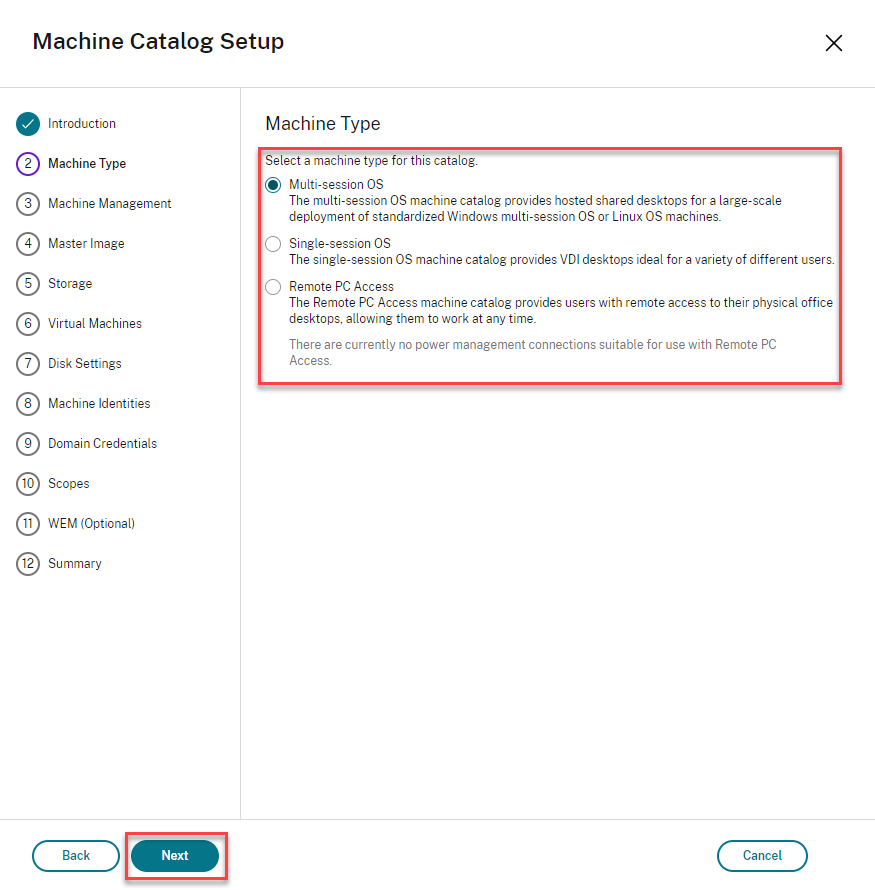 Accept the default setting that the catalog utilizes power managed machines. Then select MCS resources. In this example case we are using the Resources named GCP1-useast1(Zone:My Resource Location). Click Next: 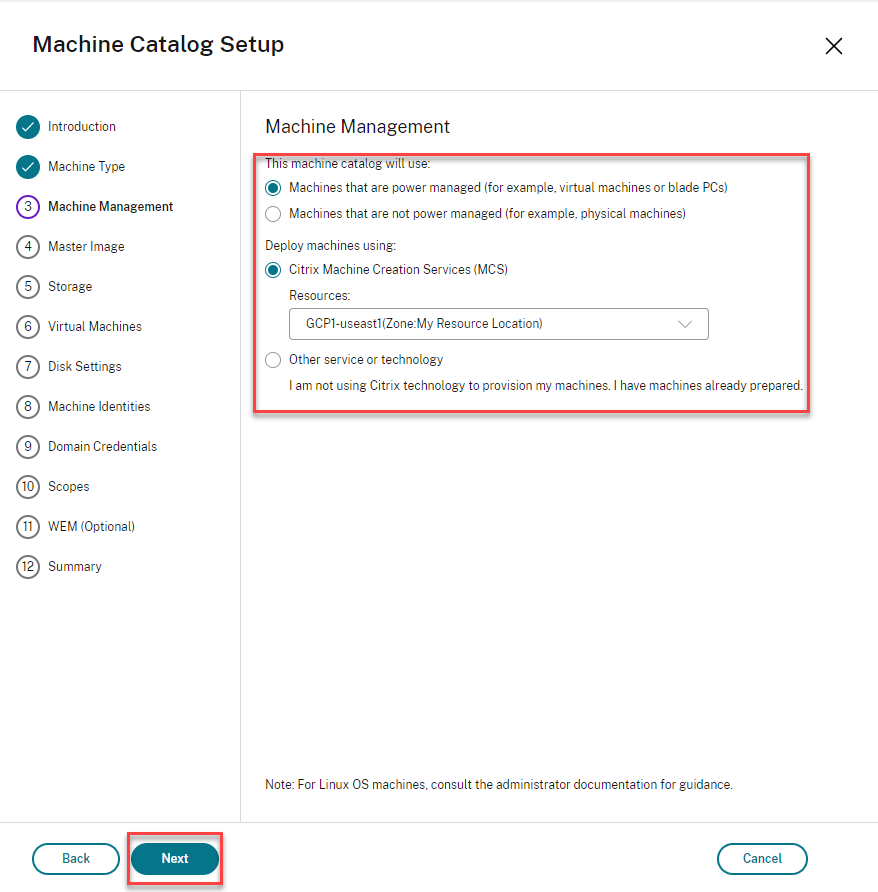 Note: These resources come from a previously created host connection, representing the network and other resources like the domain controller and reserved sole tenants. These elements are used when deploying the catalog. The process of creating the host connection is not covered in this document. More information can be found on the Connections and resources page.

The next step is to select the master image for the catalog. Recall that to utilize the reserved Node Group we must select an image that has the Node affinity value set accordingly. For this example we use the image from the previous example, s2019-vda-base. 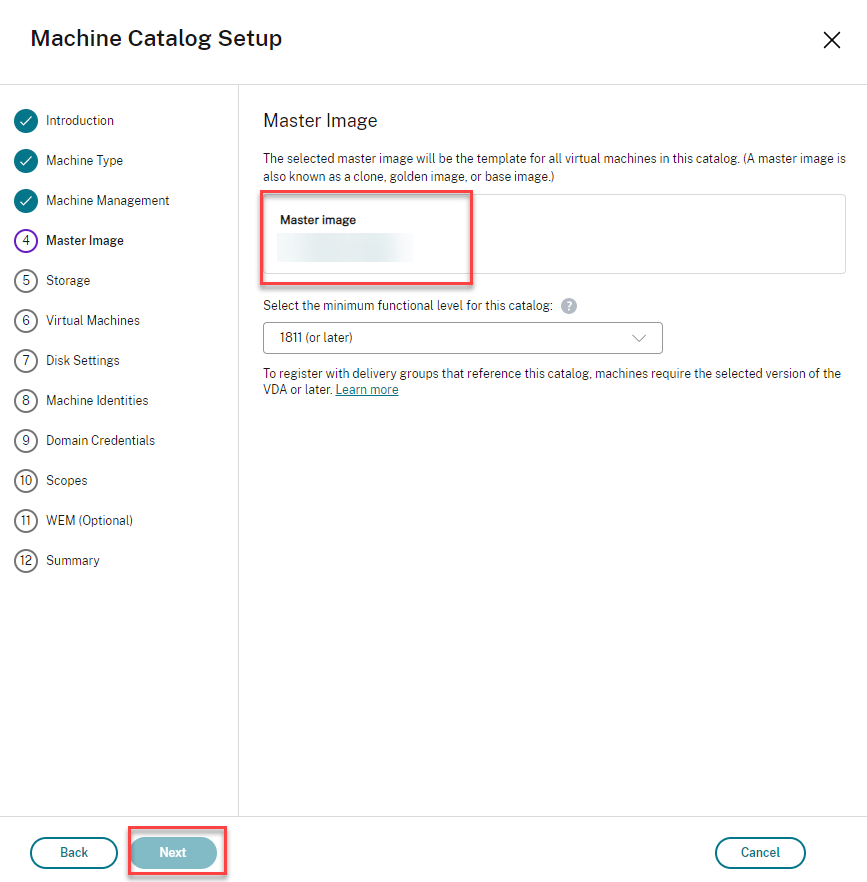 This screen indicates the storage type that will be used for the virtual macines in the machine catalog. For this example we use the Standard Persistent Disk. 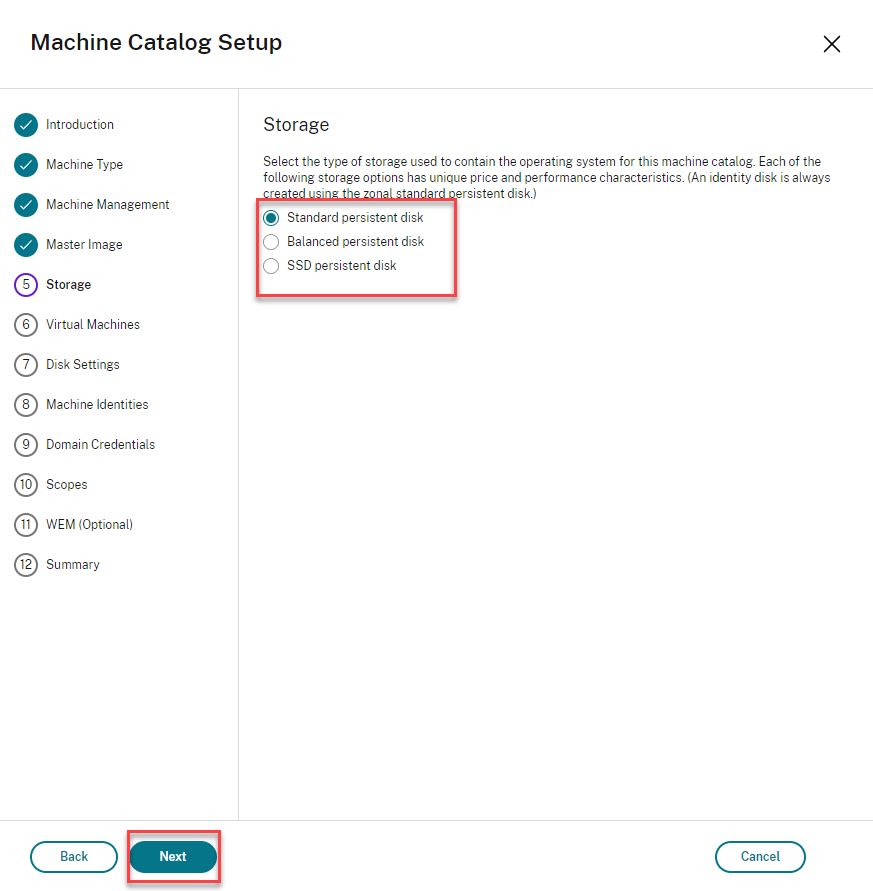 This screen indicates the number of virtual machines and the zones to which the machines are deployed. In this example we have specified three machines in the catalog. When using Sole-tenant node groups for machine catalogs it is imperative that you only select Zones containing reserved node Groups. In our example we have a single node group and it resides in Zone us-central1-a, so that is the only zone selected. 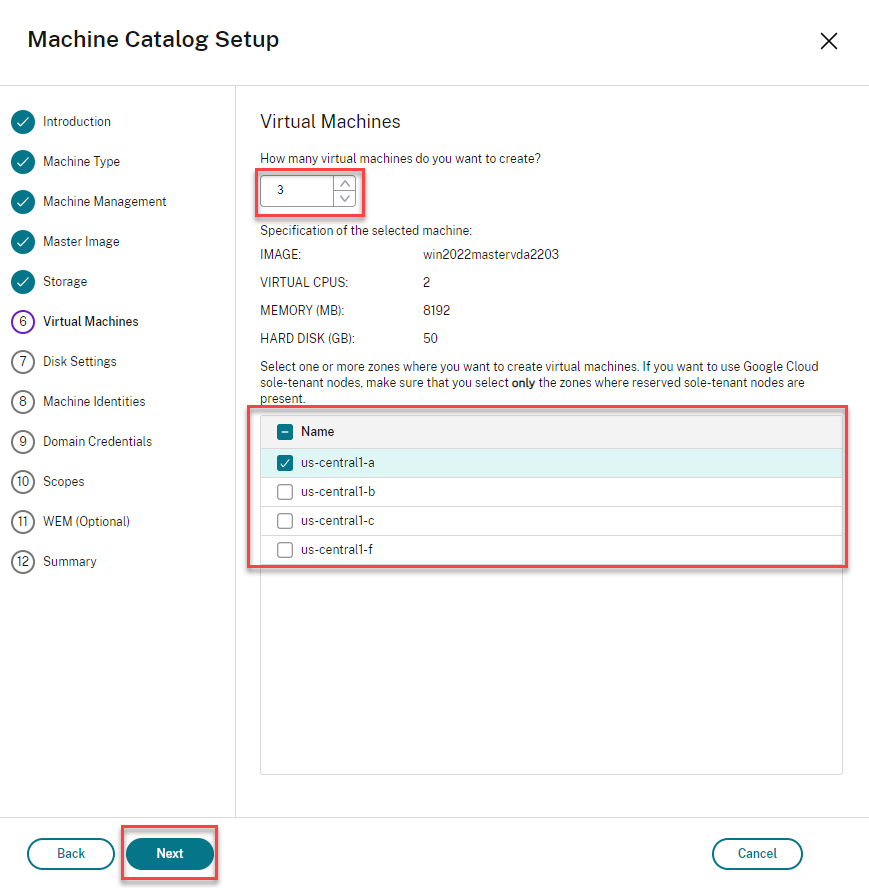 This screen provides the option to enable Write-back cache. For this example we are not enabling this setting. 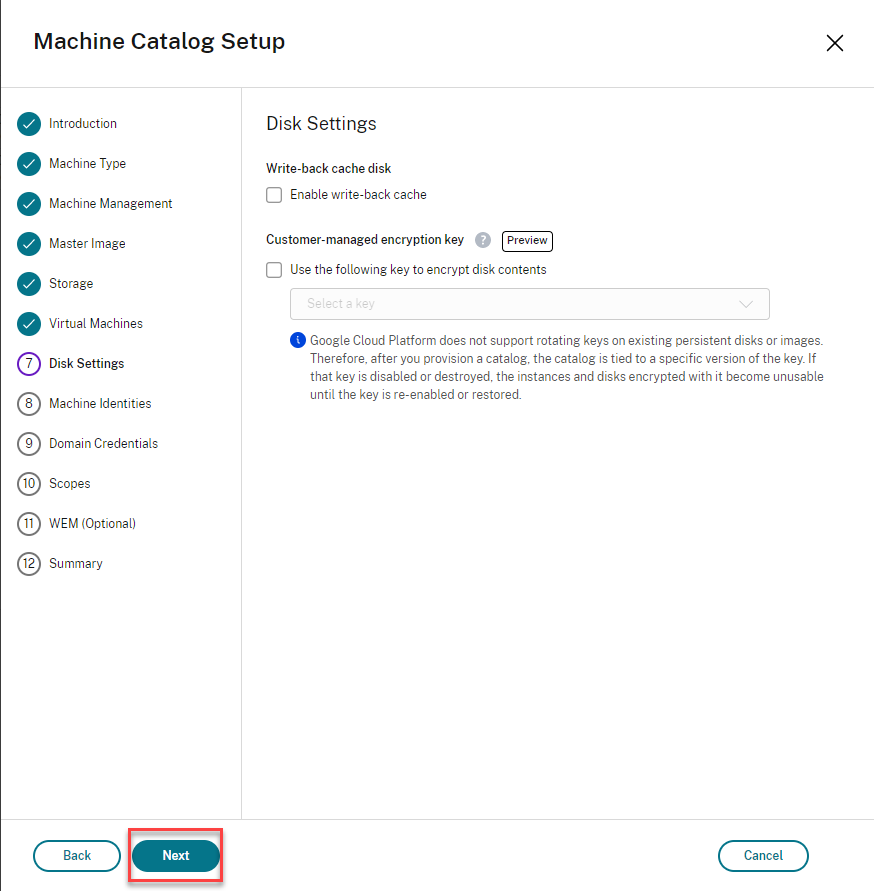 During the provisioning process MCS communicates with the domain controller to create host names for all the machines being created:

Since the catalog in this example has three machines, and we have specified a naming scheme of MySTVms-\#\# the machines are named: 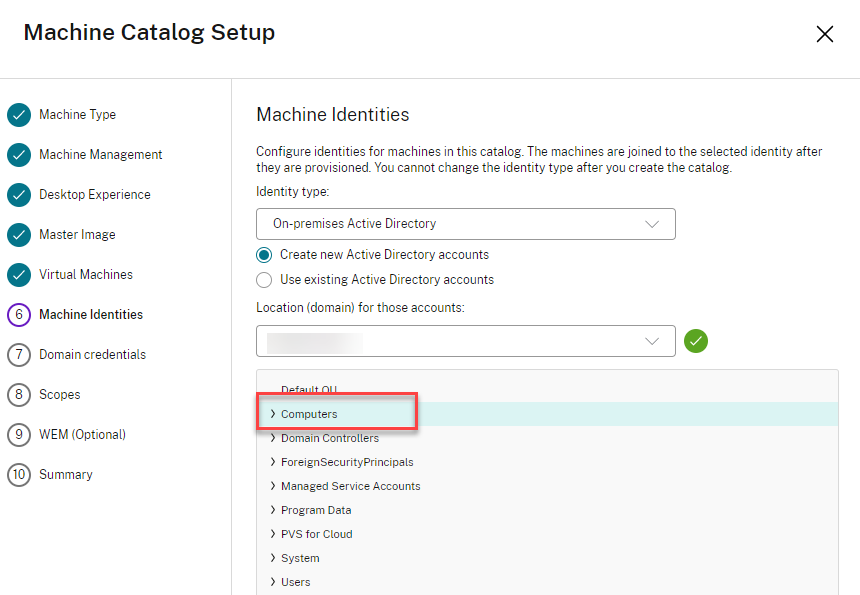 Specify the credentials used to communicate with the domain controller, mentioned in the previous step: 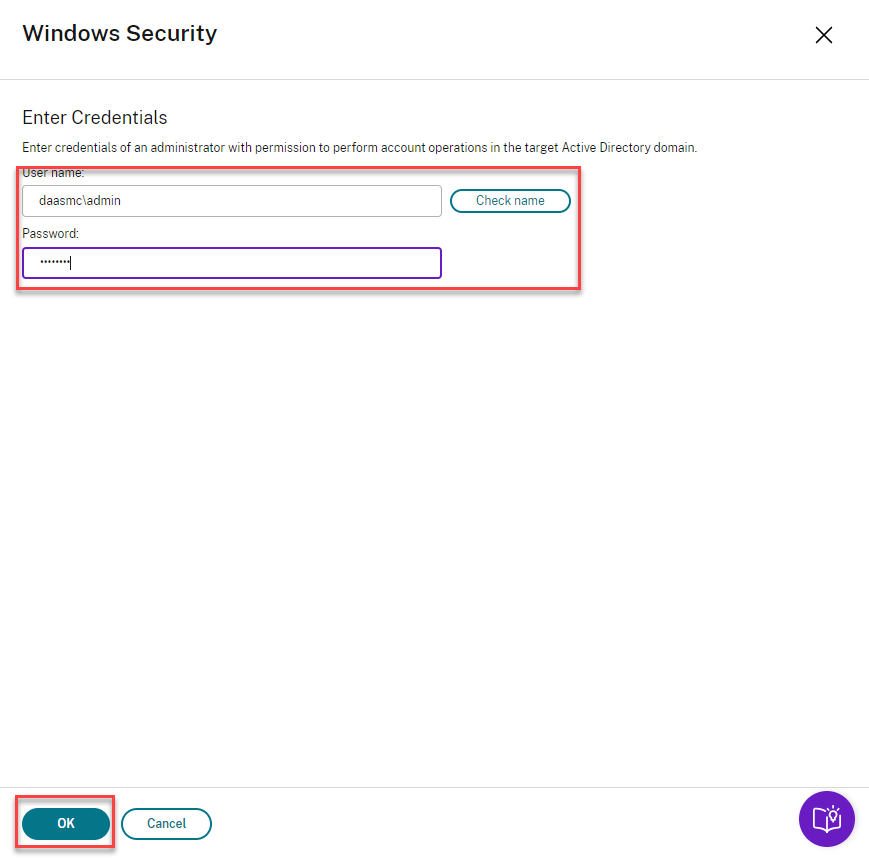 This screen displays a summary of key information during the catalog creation process. The final step is to enter a catalog name and an optional description. In this example the catalog name is My Sole Tenant Catalog. 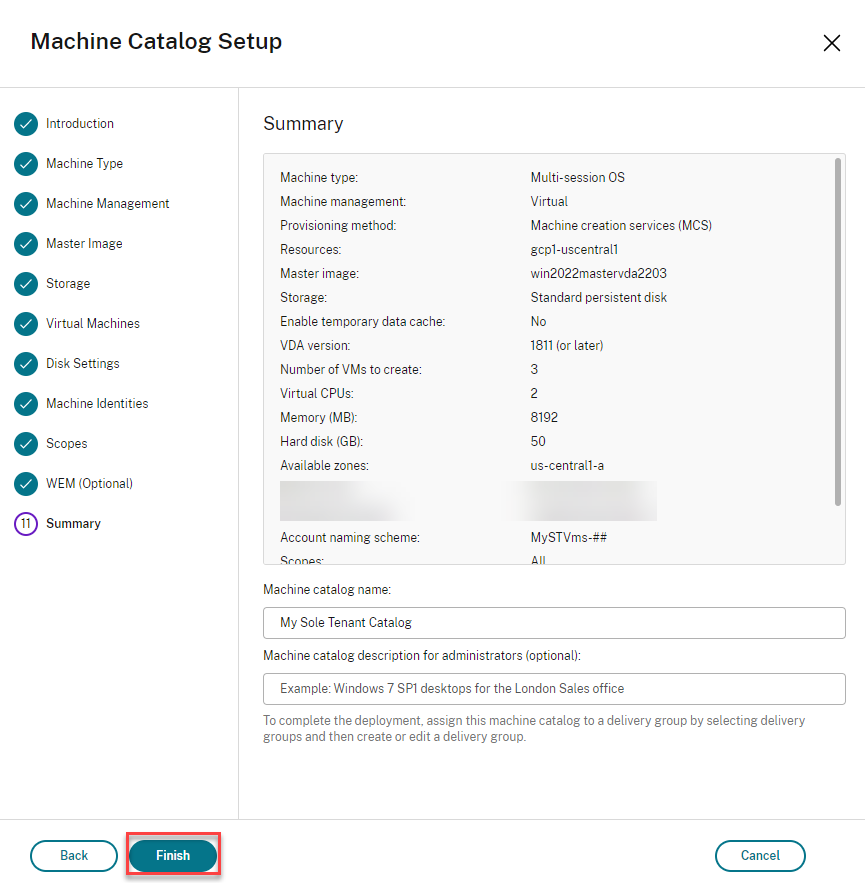 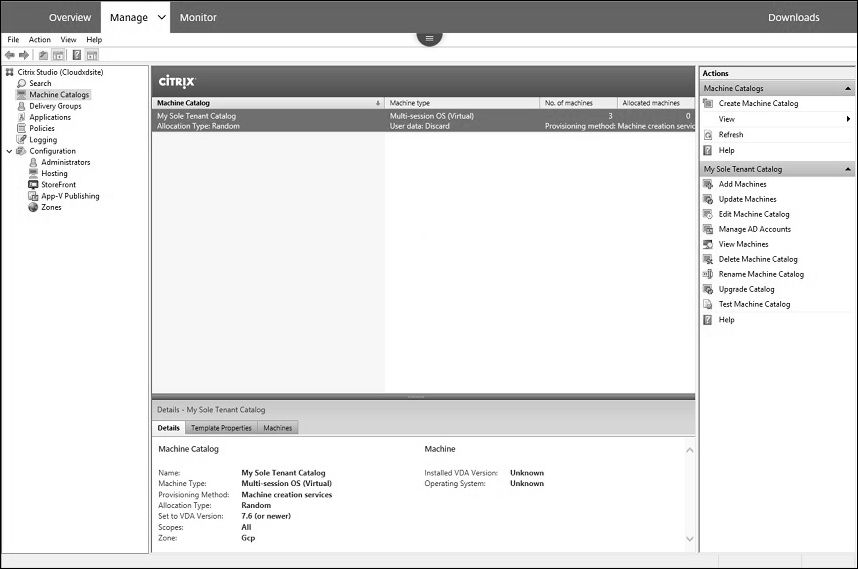 Use the Google Console to verify that the machines were created on the node group as expected: 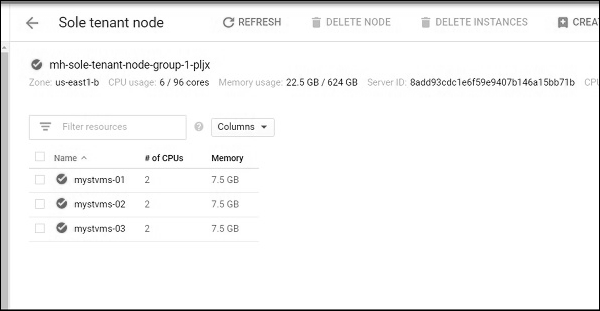 Working with any complex system containing interdependencies results in unexpected situations. A few of the common issues and errors encountered when performing the setup and configuration to utilize CVAD and GCP Sole-tenants appears in this section.

If you have successfully created a catalog the most likely reasons are:

This situation presents itself with this error when View details is selected in the Citrix Studio dialog window:

One or more of the following are the likely cause of receiving this message:

There are two cases in which this occurs:

If you encounter a dialog like this when creating the catalog: 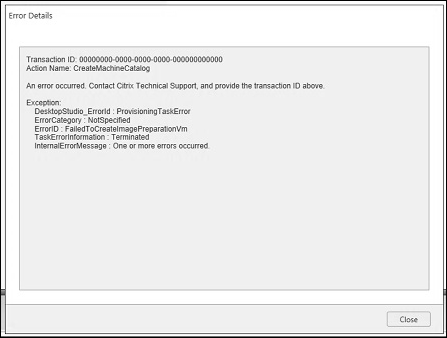 There are a few things you can check:

This section contains some exercises you may want to consider trying to get a feel for CVAD support of Google Cloud Sole-tenants.

Reserve a group node in a single zone and provision both a persistent and a non-persistent catalog to that zone. During the steps below monitor the node group using the Google Cloud Console to ensure proper behavior: