Administrator tasks and considerations
View PDF
This content has been machine translated dynamically.
Give feedback here
Thank you for the feedback

This article discusses the tasks and considerations that are relevant for administrators of mobile productivity apps.

If an issue occurs with a mobile productivity app in production, we can disable an affected feature within the app code. We can disable the feature for Secure Hub, Secure Mail, and Secure Web for iOS and Android. To do so, we use feature flags and a third-party service called LaunchDarkly. You do not need to make any configurations to enable traffic to LaunchDarkly, except when you have a firewall or proxy blocking outbound traffic. In that case, you enable traffic to LaunchDarkly via specific URLs or IP addresses, depending on your policy requirements. For details about support in MDX since for the exclusion of domains from tunneling, see the MDX Toolkit documentation.

You can enable traffic and communication to LaunchDarkly in the following ways:

Enable traffic to the following URLs

Earlier, we offered a list of IP addresses to use when your internal policies require only IP addresses to be listed. Now, because Citrix has made infrastructure improvements, we are phasing out the public IP addresses starting on July 16, 2018. We recommend that you create an allow list by domain, if you can.

Public app store apps require a fresh installation the first time you deploy them. It is not possible to upgrade from the current enterprise wrapped version of the app to the public store version.

With public app store distribution, you do not sign and wrap Citrix-developed apps with the MDX Toolkit. You can use the MDX Toolkit to wrap third-party or enterprise apps.

In China, where Google Play is unavailable, Secure Hub for Android is available on the following app stores:

If you currently use apps from the Citrix Ready Marketplace that are on public app stores, you’re already familiar with the deployment process. Mobile productivity apps adopt the same approach that many ISVs currently use. Embed the MDX SDK within the app to make the app public-store ready.

Policy files are provided as .mdx files for the public store versions of the mobile productivity apps. You can also configure policies in the Endpoint Management console when you add an app.

For full descriptions of the MDX policies, see the following articles in this section:

A mobile application management (MAM) SDK is available to replace areas of MDX functionality that aren’t covered by iOS and Android platforms. The MDX wrapping technology is scheduled to reach end of life (EOL) in September 2021. To continue managing your enterprise applications, you must incorporate the MAM SDK.

From version 20.8.0, Android apps are released with the MDX and MAM SDK to prepare for the MDX EOL strategy mentioned earlier. The MDX dual mode is intended to provide a way to transition to new MAM SDKs from the current MDX Toolkit. Using dual mode allows you to either:

There are no additional steps required after you switch to the MAM SDK.

For more details about the MAM SDK, see the following articles:

For a successful deployment of the dual mode feature, ensure the following:

MAM SDK is supported for all cloud-based customers.

When you configure Secure Mail in Citrix Endpoint Management, the dual mode feature allows you to either continue managing apps using the MDX Toolkit (now Legacy MDX) or switch to the new MAM SDK for app management. Citrix recommends that you switch to MAM SDK, as MAM SDKs are more modular and intend to allow you to use only a subset of the MDX functionality that your organization uses. 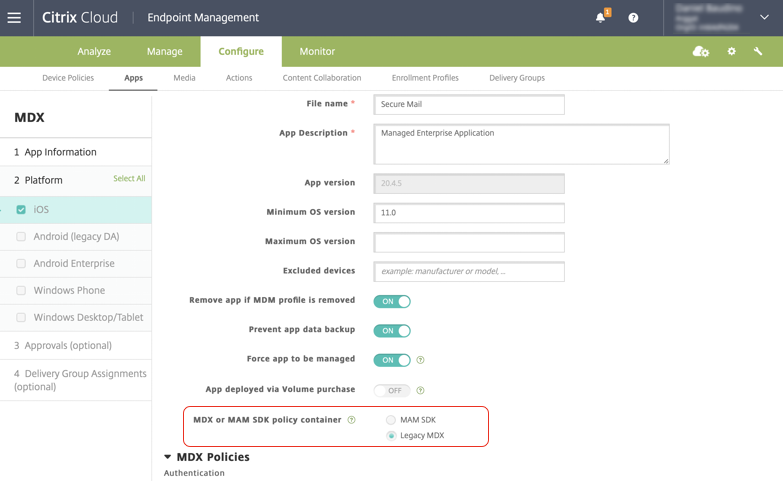 User connections to the internal network

Connections that tunnel to the internal network can use a full VPN tunnel or a variation of a clientless VPN, referred to as Tunneled – Web SSO. The Preferred VPN mode policy controls that behavior. By default, connections use Tunneled – Web SSO, which is recommended for connections that require SSO. The full VPN tunnel setting is recommended for connections that use client certificates or end-to-end SSL to a resource in the internal network. The setting handles any protocol over TCP and can be used with Windows and Mac computers, and with iOS and Android devices.

The Network access policy specifies whether restrictions are placed on network access. By default, Secure Mail access is unrestricted, which means no restrictions are placed on network access. Apps have unrestricted access to networks to which the device is connected. By default, Secure Web access is tunneled to the internal network, which means a per-application VPN tunnel back to the internal network is used for all network access and Citrix ADC split tunnel settings are used. You can also specify blocked access so that the app operates as if the device has no network connection.

Client properties are used to configure settings such as the following:

The inactivity timer defines the time in minutes that users can leave their device inactive and can access an app without being prompted for a Citrix PIN or passcode. To enable this setting for an MDX app, you must set the App passcode policy to On. If the App passcode policy is Off, users are redirected to Secure Hub to perform a full authentication. When you change this setting, the value takes effect the next time users are prompted to authenticate.

Citrix PIN simplifies the user authentication experience. The PIN is used to secure a client certificate or save Active Directory credentials locally on the device. If you configure PIN settings, the user sign-on experience is as follows:

You use client properties to enable PIN authentication, specify the PIN type, and specify PIN strength, length, and change requirements.

Fingerprint authentication, also known as touch ID authentication, for iOS devices is an alternative to Citrix PIN. The feature is useful when wrapped apps, except for Secure Hub, are in need offline authentication, such as when the inactivity timer expires. You can enable this feature in the following authentication scenarios:

If user entropy is on, the Enable Touch ID Authentication property is ignored. User entropy is enabled through the Encrypt secrets using the Passcode key.

After you configure fingerprint authentication, users do not need to reenroll their devices.

For more information about the Encrypt Secrets using Passcode key and client properties in general, see the Endpoint Management article about Client properties.

If you don’t configure the value DISABLE_GA in the Citrix Endpoint Management console, Google Analytics data is active.