StoreFront can be configured either on a single server or as a multiple server deployment. Multiple server deployments not only provide additional capacity, but also greater availability. The modular architecture of StoreFront ensures that configuration information and details of users’ application subscriptions are stored on and replicated between all the servers in a server group. This means that if a StoreFront server becomes unavailable for any reason, users can continue to access their stores using the remaining servers. Meanwhile, the configuration and subscription data on the failed server are automatically updated when it reconnects to the server group. Subscription data is updated when the server comes back online but you must propagate configuration changes if any were missed by the server while offline. In the event of a hardware failure that requires replacement of the server, you can install StoreFront on a new server and add it to the existing server group. The new server is automatically configured and updated with users’ application subscriptions when it joins the server group. 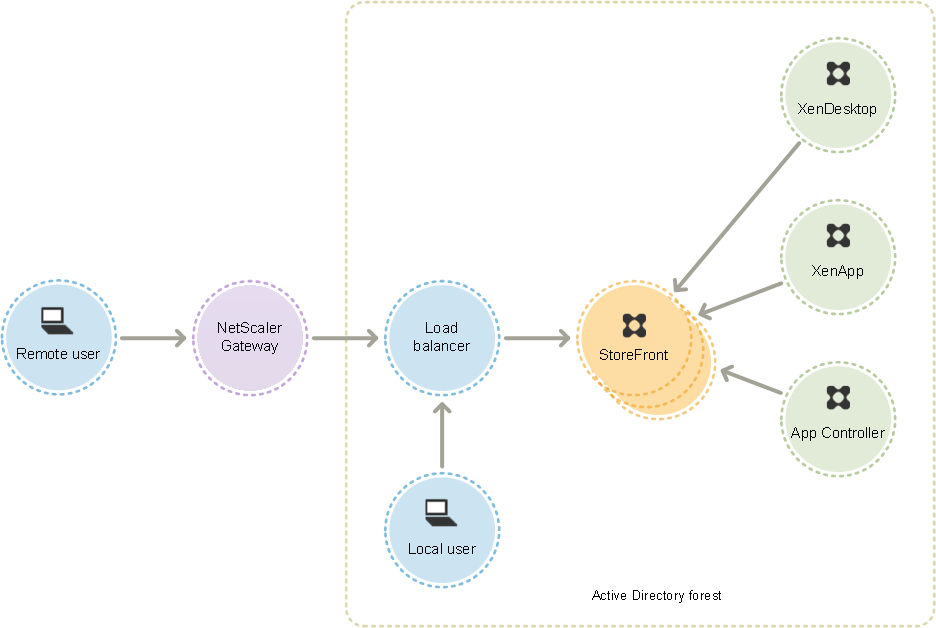 Active load balancing of requests sent from StoreFront to XenDesktop sites and XenApp farms is recommended for deployments with thousands of users or where high loads occur, such as when a large number of users log on over a short period of time. Use a load balancer with built-in XML monitors and session persistency, such as NetScaler.

If you deploy SSL-terminating load balancer or if you need to troubleshoot, you can use the PowerShell cmdlet Set-STFWebReceiverCommunication.

The valid values are:

Note that you have to switch off loopback to use any web proxy tool like Fiddler to capture the network traffic between Citrix Receiver for Web and StoreFront Services.

For single server deployments you can install StoreFront on a non-domain-joined server (but certain functionality will be unavailable); otherwise, StoreFront servers must reside either within the Active Directory domain containing your users’ accounts or within a domain that has a trust relationship with the user accounts domain unless you enable delegation of authentication to the XenApp and XenDesktop sites or farms. All the StoreFront servers in a group must reside within the same domain.

In a production environment, Citrix recommends using HTTPS to secure communications between StoreFront and users’ devices. To use HTTPS, StoreFront requires that the IIS instance hosting the authentication service and associated stores is configured for HTTPS. In the absence of the appropriate IIS configuration, StoreFront uses HTTP for communications. You can change from HTTP to HTTPS at any time, provided the appropriate IIS configuration is in place.

StoreFront enables you to deploy different Stores in different IIS websites per Windows server so that each store can have a different host name and certificate binding.

Start by creating two websites, in addition to the default web site. After creating multiple websites in IIS, use the PowerShell SDK to create a StoreFront deployment in each of those IIS websites. For more information about creating websites in IIS, see Create a Web Site.

Example: To create two IIS website deployments - one for applications and one for desktop.

StoreFront disables the management console when it detects multiple sites and displays a message to that effect.

For more information, see Before installing and configuring.

The number of Citrix Receiver users supported by a StoreFront server group depends on the hardware you use and on the level of user activity. Based on simulated activity where users log on, enumerate 100 published applications, and start one resource, expect a single StoreFront server with the minimum recommended specification of two virtual CPUs running on an underlying dual Intel Xeon L5520 2.27Ghz processor server to enable up to 30,000 user connections per hour.

The minimum recommended memory allocation for each server is 4GB. When using Citrix Receiver for Web, assign an additional 700 bytes per resource, per user in addition to the base memory allocation. As with using Web Receiver, when using Citrix Receiver, design environments to allow an extra 700 bytes per resource, per user on top of the base 4 GB memory requirements for this version of StoreFront.

As your usage patterns might be different than those simulated above, your servers might support more or fewer numbers of users connections per hour.

StoreFront server group deployments are only supported where links between servers in a server group have latency of less than 40 ms (with subscriptions disabled) or less than 3 ms (with subscriptions enabled). Ideally, all servers in a server group should reside in the same location (data center, availability zone), but server groups can span locations within the same region provided that links between servers in the group meet these latency criteria. Examples include server groups spanning availability zones within a cloud region, or between metropolitan area data centers. Note that latency between zones varies by cloud provider. Citrix do not recommend spanning locations as a disaster recovery configuration, but it may be suitable for high availability.

Occasionally, network issues or other problems can occur between a StoreFront store and the servers that it contacts, causing delays or failures for users. You can use the timeout settings for a store to tune this behavior. If you specify a short timeout setting, StoreFront quickly abandons a server and tries another one. This is useful if, for example, you have configured multiple servers for failover purposes.

If you specify a longer timeout, StoreFront waits longer for a response from a single server. This is beneficial in environments where network or server reliability is uncertain and delays are common.

Thank you for the feedback
Plan your StoreFront deployment
February 11, 2021
Contributed by:
C