Remote PC Access is an easy and effective way to allow users to access their office-based, physical Windows PC. Using any endpoint device, users can remain productive regardless of their location. However, organizations want to consider the following when implementing Remote PC Access.

There are multiple ways to connect a PC to a user, each applicable to different scenarios.

In many deployments, Remote PC Access gets deployed in an office worker scenario where one user is permanently assigned to one PC. 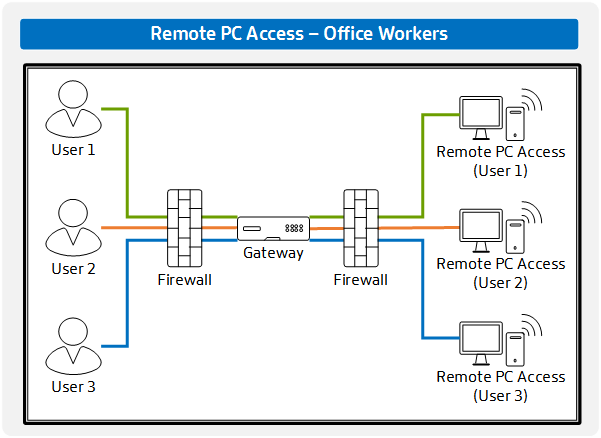 This is the most common deployment scenario. To implement this use case, the administrator can use the Remote PC Access machine catalog type. 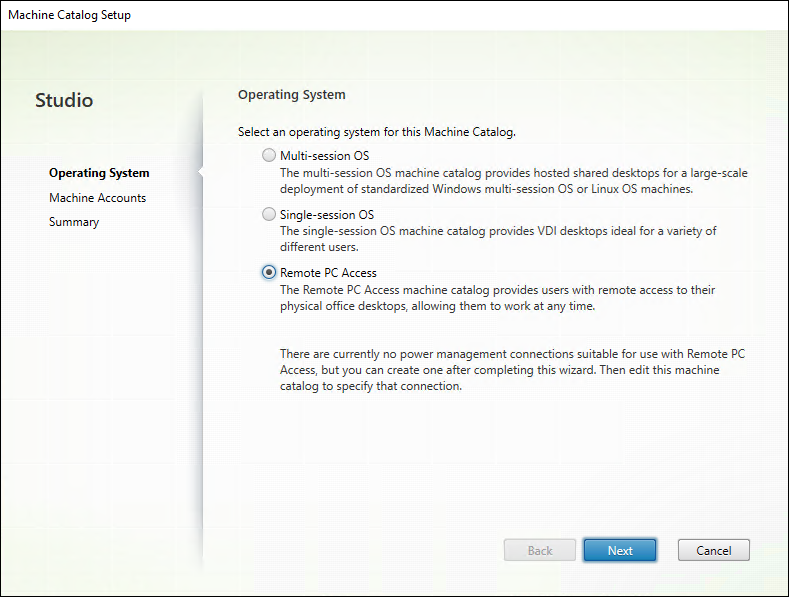 In certain situations, users need to share a set of computing resources, often found in computing labs at schools, colleges, and universities. Users are randomly assigned to an available physical PC. 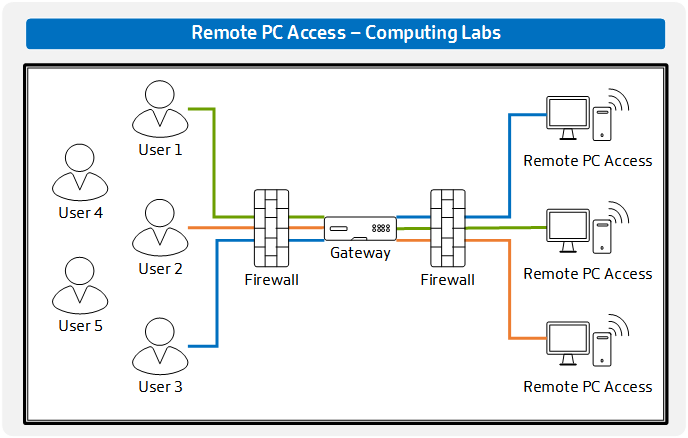 This type of configuration uses an unmanaged, randomly assigned, single-session OS, which is configured as follows: 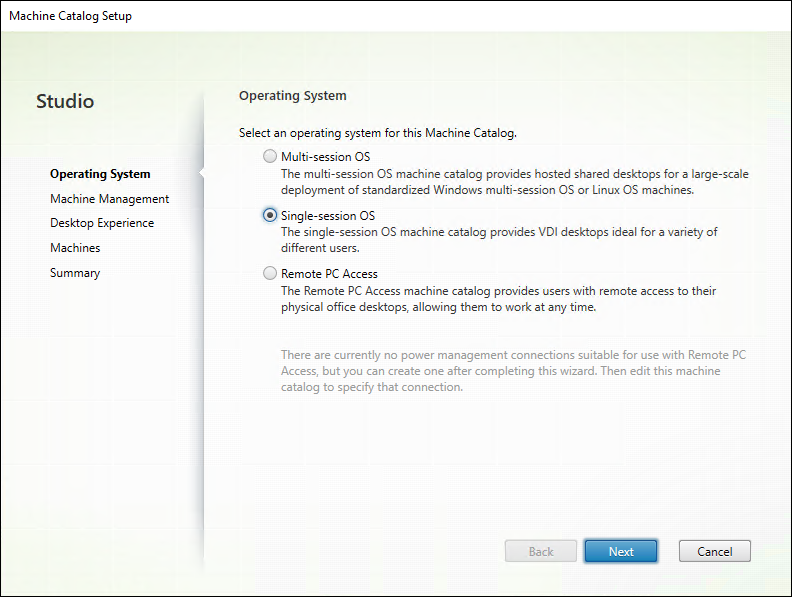 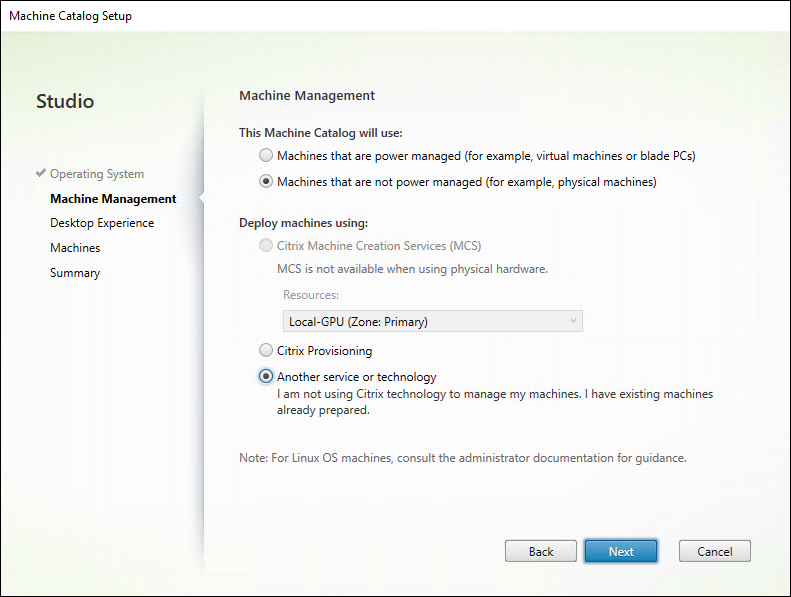 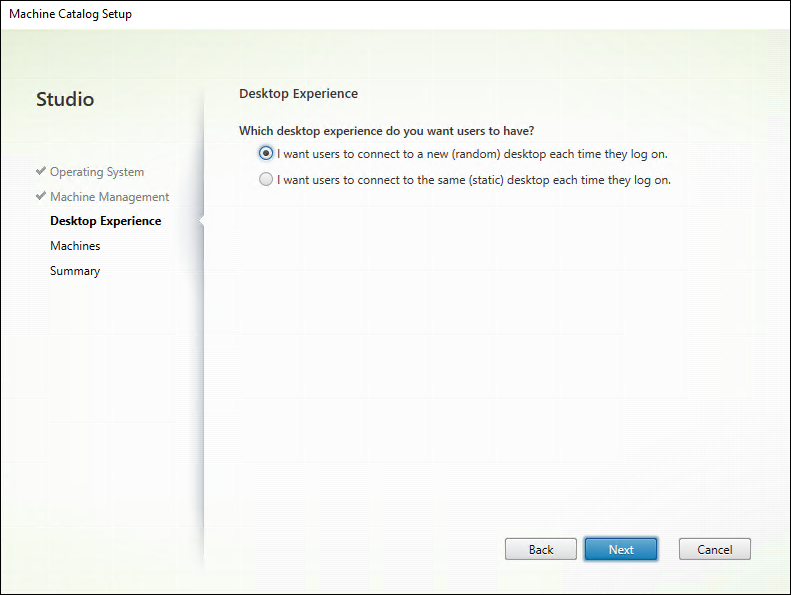 Because there are often more users than PCs in a computing lab, policies limiting session time are recommended.

Users continue to authenticate to their office-based PC with their Active Directory credentials. However, as they are accessing over the Internet from outside the office premises, organizations typically require stronger levels of authentication than just user name and password.

Some of these options, like the time-based one-time password, require the user to initially register for a new token. As token registration requires the user to access their email to validate their identity, it may need to be completed before the user attempts to work remotely.

Users can remotely access their work PC with an untrusted, personal device. Organizations can use integrated Citrix Virtual Apps and Desktops policies to protect against:

Note: The following sizing recommendations are a good starting point, but each environment is unique, resulting in unique results. Monitor the infrastructure and size appropriately.

As users are accessing existing office PCs there is minimal extra infrastructure needed to support adding Remote PC Access, however it is important that the Control layer and Access layer infrastructure are sized and monitored correctly to ensure that they do not become a bottleneck.

When a user establishes an HDX session to their office PC, the ICA traffic needs to be proxied to the VDA. ICA Proxy can be provided via Citrix Gateway appliances or Citrix Gateway Service.

When using an on-premises Citrix ADC for Citrix Gateway, consult the data sheet for the particular model and refer to the SSL VPN/ICA proxy concurrent users line item as a starting point. If the ADC is handling other workloads, validate that current throughput and CPU usage are not approaching any upper limits.

Ensure that there is adequate available Internet bandwidth where the Gateway appliance is located to support the expected concurrent ICA sessions.

When using Gateway Service, Citrix recommends using rendezvous protocol to mitigate the issue of Cloud Connectors being a bottleneck for ICA Proxy. 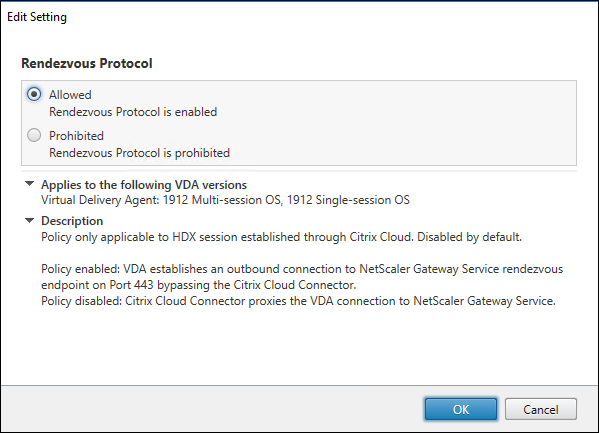 There are certain prerequisites to allow the rendezvous protocol to function, including:

If the office PC is not powered on with the VDA registered, the user’s session cannot be brokered. Citrix recommends putting in place processes to ensure the machines that users need to connect to are powered-on.

If available, modify the PC’s BIOS setting to automatically power on in the event of a power failure. Administrators can also configure an Active Directory Group Policy object to remove the “Shut Down” option from the Windows PC. This helps prevent the user from powering down the physical PC.

It is important that users are each brokered to their own office PC. Once the VDA has been installed and the catalog and delivery group defined, users are automatically assigned when they next logon locally to the PC. This is an effective method for assigning thousands of users.

By default, multiple users can be assigned to a desktop if they have all logged into the same physical PC, but this can be disabled via a registry edit on the Delivery Controllers.

The Citrix Virtual Apps and Desktops administrator can modify the assignments as needed within Citrix Studio or via PowerShell. To get started with using PowerShell for adding Remote PC Access VDAs to a Site and assigning users, Citrix Consulting produced a reference script which can be found on the Citrix GitHub page.

Though Windows 7 is no longer supported, many organizations still have legacy Windows 7 desktop machines. For deployment on Windows 7 and Windows 8.1, customers should use the XenDesktop 7.15 LTSR VDA.

For deployment on Windows 10, customers should use the Citrix Virtual Apps and Desktops 1912 LTSR VDA or a supported Current Release VDA. Citrix version compatibility for Windows 10 builds can be found in CTX224843.

There are several VDA installer command-line options to consider when deploying Remote PC Access that can enable useful functionality.

Used with the full VDA package, VDAWorkstationSetup.exe, to install only the core components required for Remote PC Access.

Opens ports in the Windows firewall required by the Cloud Connector and enabled features (except Windows Remote Assistance), if the Windows Firewall Service is detected, even if the firewall is not enabled.

Opens UDP ports in the Windows firewall that are required by HDX adaptive transport, if the Windows Firewall Service is detected, even if the firewall is not enabled.

Enables or disables use of UDP for audio packets (RealTime Audio Transport for audio). Enabling this feature can improve audio performance.

To open the ports that the VDA uses to communicate with the Controller and enabled features, specify the /enable_hdx_ports option, in addition to the /enable_real_time_transport option.

In a Remote PC Access deployment, most implementations do not require profile management. However, Citrix User Profile Manager also captures performance metrics, which are useful for administrators to identify and fix performance-related issues. User Profile Manager does not have to be configured, it just needs to be deployed to capture metrics.

When installed, the Citrix User Profile Manager allows administrators to run reports on the user experience, session responsiveness, and insights into logon performance within Citrix Director and Citrix Analytics for Performance.

Log file location. The specified folder must exist as the installer does not create it. The default path is “%TEMP%\Citrix\XenDesktop Installer,” but if the install is conducted via SCCM, then depending on the context, the log files can be in the system temp folder instead.

Do NOT use this flag as it is intended mainly for MCS deployed machines.

To deploy the Virtual Delivery Agent to thousands of physical PCs, automated processes are required.

The install media for Citrix Virtual Apps and Desktops includes a deployment script (%InstallMedia%\Support\ADDeploy\InstallVDA.bat) that can be used via Active Directory Group Policy Objects.

The script can be used as a baseline for PowerShell scripts and Enterprise Software Deployments (ESD) tools. These approaches allow organizations to quickly deploy the agent to thousands of physical endpoints.

If you are automating the VDA installation with an ESD tool such as SCCM or Altiris, creating separate packages for the prerequisites and VDA tends to work best. You can find more information about VDA deployment with ESD tools in the product documentation.

For content redirection to be available when using VDA 1912 or older, it is required to deploy the VDA on the physical PCs using the single-session full VDA installer (standalone VDAWorkstationSetup.exe) with the /remotepc command line option.

If deploying VDA 2003 or newer, the single-session core VDA installer can be used instead (standalone VDAWorkstationCoreSetup.exe).

Similar to any other Citrix VDA, there are a handful of key network ports to be mindful of opening for the system to function. As a reminder, ICA traffic needs to reach the Remote PC Access from the Citrix ADC hosting the external Citrix Gateway. A comprehensive list of ports can be found in Communication Ports Used by Citrix Technologies.

If the VDA is unable to register with the controller, review the VDA registration article. If you are using Citrix Cloud, the Cloud Connectors take the place of the Delivery Controller.

More design guidance including considerations and troubleshooting steps can be found in the Remote PC Access product documentation.