The information provided applies to deployments in which each resource location contains either VDI workloads or RDS workloads. For resources locations that contain mixed workloads of VDI and RDS together, contact Citrix Consulting Services.

The Cloud Connector links your workloads to Citrix DaaS in the following ways:

It is important to have your Cloud Connectors properly sized and configured to meet your specific needs.

Each machine catalog and hosting connection is assigned to a resource location.

For deployments with more than one resource location, assign machine catalogs and VDAs to the resource locations to optimize the ability of Local Host Cache (LHC) to broker connections during outages. For more information on creating and managing resource locations, see Connect to Citrix Cloud. For optimum performance, configure your Cloud Connectors on low-latency connections to VDAs, AD servers, and hypervisors.

For performance similar to that seen in these tests, use modern processors that support SHA extensions. SHA extensions reduce the cryptographic load on the CPU. Recommended processors include:

The tests described in this article were performed with AMD EPYC and Intel Cascade Lake processors.

Cloud Connectors have a heavy cryptographic load while communicating with the cloud. Cloud Connectors using processors with SHA extensions experience lower load on their CPU which is expressed by lower CPU usage by the Windows Local Security Authority Subsystem Service (LSASS).

Citrix recommends using modern storage with adequate I/O operations per second (IOPS), especially for deployments that use LHC. Solid state drives (SSDs) are suggested but premium cloud storage tiers are not needed. Higher IOPS are needed for LHC scenarios where the Cloud Connector runs a small copy of the database. This database is updated with site configuration changes regularly and provides brokering capabilities to the resource location in times of Citrix Cloud outages.

If compute resources available to the SQL Express Server LocalDB are misconfigured, configuration synchronization times might be increased and performance during outages might be reduced. In some virtualized environments, compute capacity might depend on the number of logical processors and not CPU cores.

All results in this summary are based on the findings from a test environment as configured in the detailed sections of this article. Different system configurations might yield different results.

This illustration gives a graphical overview of the tested configuration. 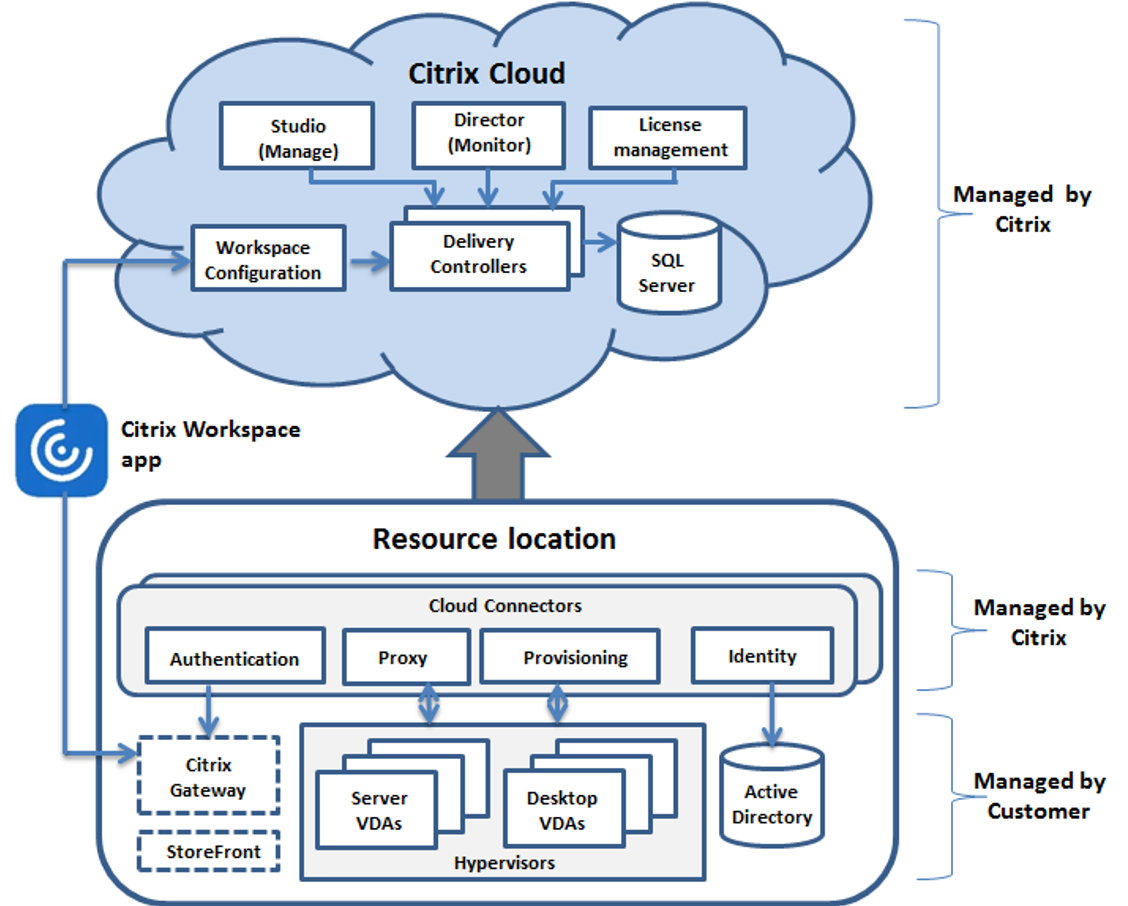 This table provides a quick guide to sizing your Cloud Connectors. Results are based on Citrix internal testing. The configurations described were tested with varying workloads, including high-rate session launch tests and registration storms.

About these test configurations

Tests were conducted to add load and to measure the performance of the environment components. The components were monitored by collecting performance data and procedure timing, such as logon time and registration time. In some cases, proprietary Citrix simulation tools were used to simulate VDAs and sessions. These tools are designed to exercise Citrix components the same way that traditional VDAs and sessions do, without the same resource requirements to host real sessions and VDAs. Tests were conducted in both cloud brokering and Local Host Cache mode for scenarios with Citrix StoreFront.

Recommendations for Cloud Connector sizing in this article are based on data gathered from these tests.

The following tests were run:

Workloads of up to 1000 VDI or up to 200 RDS were tested using Citrix Workspace.

In configurations that use Citrix Workspace, Cloud Connector handles:

Test results are summarized in the following table.

These workloads were tested with 2 vCPUs and 4 GB memory.

These workloads were tested with 4 vCPUs and 4 GB memory.

These workloads were tested with 4 vCPUs and 6 GB memory.

These workloads were tested with 4 vCPUs and 8 GB memory.

These workloads were tested with 8 vCPUs and 10 GB memory.

CPU, memory, and disk usage are temporarily increased while data is imported to the temporary database.

Thank you for the feedback
Size and scale considerations for Cloud Connectors
July 1, 2022
Contributed by:
E R