You specify the initial registration method when you install a VDA. (If you disable auto-update, the method you select during VDA installation is used for subsequent registrations.) 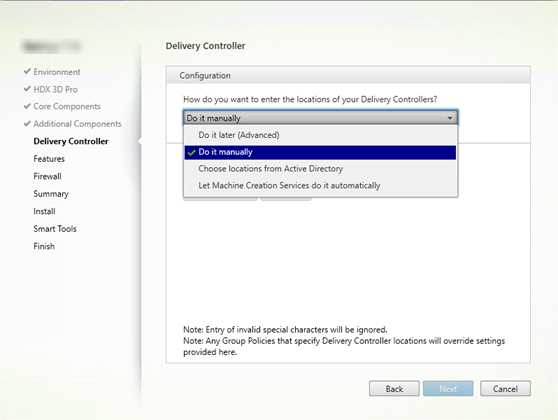 Update the ListOfDDCs registry key, which lists the FQDNs of all the Controllers or Cloud Connectors in the site. (This key is the equivalent of the Active Directory site OU.)

Remember: If you also enable policy-based VDA registration through Citrix policy, that overrides settings you specify during VDA installation, because it is a higher-priority method.

Auto-update (introduced in XenApp and XenDesktop 7.6) is enabled by default. It is the most efficient method for keeping your VDA registrations up-to-date. Although not used for initial registration, the auto-update software downloads and stores the ListOfDDCs in a persistent cache on the VDA when initial registration occurs. This process is done for each VDA. The cache also holds machine policy information, which ensures that policy settings are retained across restarts.

As shown in the following example, the cache file contains hostnames and a list of Security IDs (ListOfSIDs). The VDA does not query SIDs, which reduces the Active Directory load.

Although auto-update usually has the highest priority of all VDA registration methods and overrides settings for other methods, there is an exception. The NonAutoListOfDDCs elements in the cache specify the initial VDA configuration method. Auto-update monitors this information. If the initial registration method changes, the registration process skips auto-update, and uses the next-highest configured priority method. This process can be helpful when you move a VDA to another site (for example, during disaster recovery).

A component in this process is called Service Principal Name (SPN), which stored as a property in an Active Directory computer object. When your VDA connects to a Controller or Cloud Connector, it must specify “who” it wants to communicate with. This address is an SPN. If you use a load-balanced IP, mutual Kerberos authentication correctly recognizes that the IP does not belong to the expected Controller or Cloud Connector.

These groups are intended for use within a single site (not multiple sites).

Use parentheses to specify groups of Controllers/Cloud Connectors. For example, with four Controllers (two primary and two backups), a grouping might be:

For XenDesktop 7.0 or higher, there is an extra step you need to perform to use Registration Groups feature. You need to Prohibit the Enable Auto Update of Controller policy from Citrix Studio.

As noted previously, a VDA must be registered with a Delivery Controller or Cloud Connector to be considered when launching brokered sessions. Unregistered VDAs can result in underutilization of otherwise available resources. There are various reasons a VDA might not be registered, many of which an administrator can troubleshoot. Studio provides troubleshooting information in the catalog creation wizard, and after you create a Delivery Group.

Thank you for the feedback
VDA registration
January 19, 2021
Contributed by:
C