Citrix Application Delivery Controller (ADC) Global Server Load Balancing (GSLB) is a DNS-based solution which describes a range of technologies to distribute resources around multi-site data center locations. This document describes the deployment topology and configuration architecture needed to set up GSLB between multi-sites where Citrix Virtual Apps and Desktops StoreFront servers are load-balanced by Citrix Gateway and Citrix ADC.

The following includes fundamental design factors during an assessment and design phase that affects the formation of the design to cater for requirements. It highlights those considerations and provides background information and insight to support these.

With ordinary DNS, when a client sends a domain name system (DNS) request, it receives a list of IP addresses of the domain or service. Generally, the client chooses the first IP address in the list and initiates a connection with that server. The DNS server uses a technique called DNS round robin to rotate through the IPs on the list. It sends the first IP address to the end of the list and promotes the others after it responds to each DNS request. This technique ensures equal distribution of the load, but it does not support disaster recovery, load balancing based on load or proximity of servers, or persistency.

Fundamentally, GSLB based on DNS works the same way as standard DNS, with the exception that more logic is in place to determine what addresses to return. The logic in most situations is based on:

To ensure the various pieces of information are in place, the ADC system makes use of several ways to determine state so that proper decision making can occur: 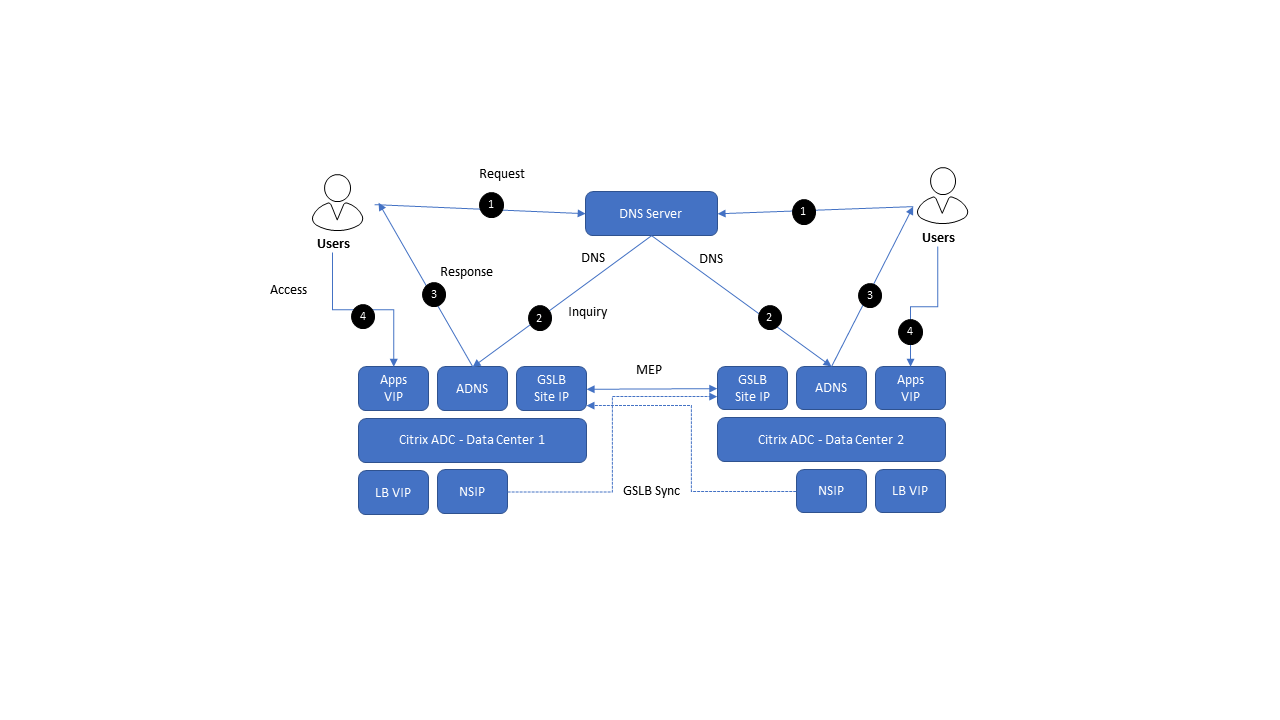 Citrix ADC appliances configured for GSLB provide for disaster recovery and ensure the continuous availability of applications by protecting against points of failure in a WAN. GSLB can balance the load across data centers by directing client requests to the closest or best-performing data center, or to surviving data centers in the event of an outage.

The following are some of the typical GSLB deployment types:

All the sites in an active-active deployment are active, and all the services for a particular application/domain are bound to the same GSLB virtual server. Sites exchange metrics through the Metrics Exchange Protocol (MEP). Site metrics exchanged between the sites include the status of each load balancing and content switching virtual server, the current number of connections, current packet rate, and current bandwidth usage. The Citrix ADC appliance needs this information to perform load balancing across the sites.

An active-active deployment can include a maximum of 32 GSLB sites, because MEP cannot synchronize more than 32 sites. No backup sites are configured in this deployment type.

The Citrix ADC appliance sends client requests to the appropriate GSLB site as determined by the GSLB method specified in the GSLB configuration. 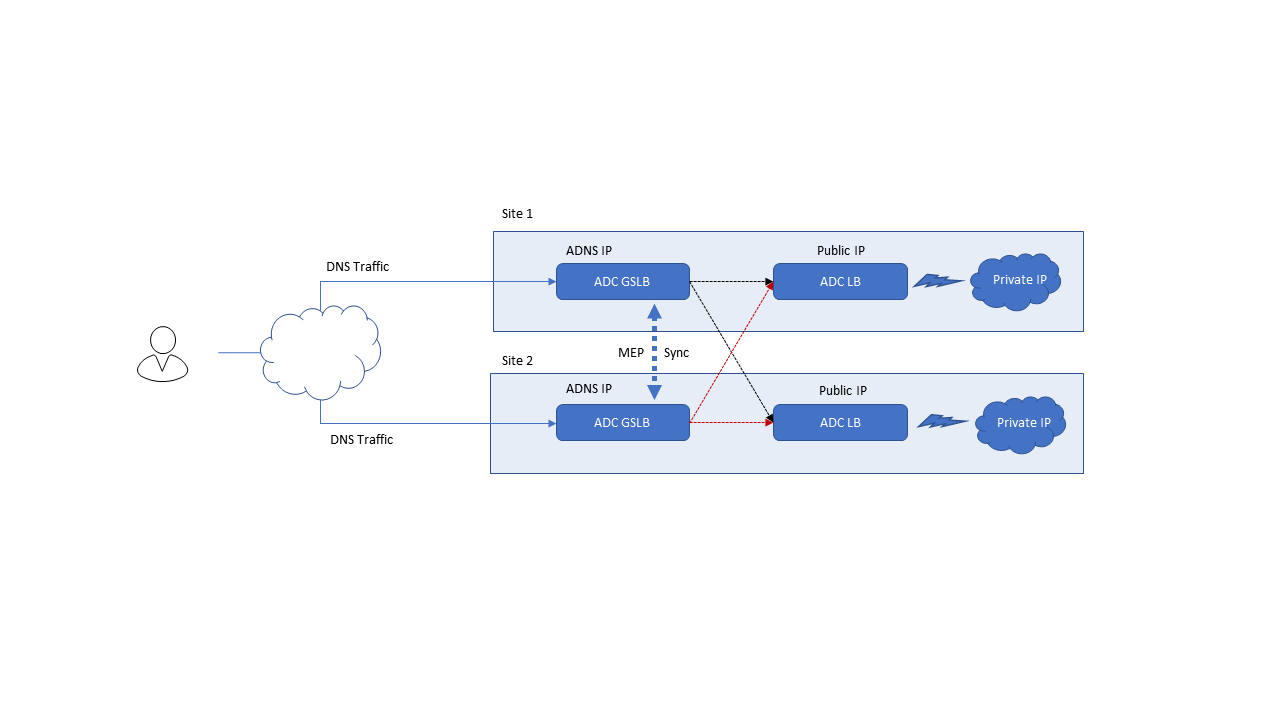 Active-Passive site deployment - An active-passive site consists of an active and a passive data center. This deployment type is ideal for disaster recovery. 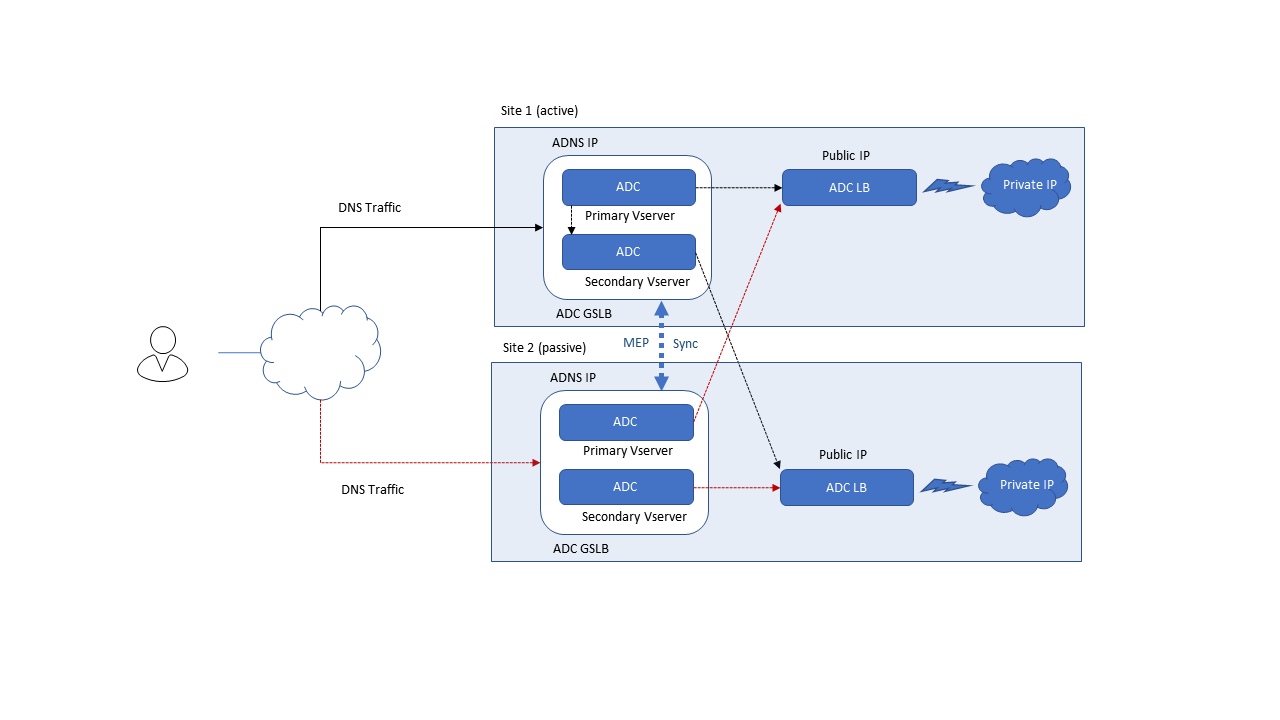 Parent-child topology deployment - Citrix ADC GSLB provides global server load balancing and disaster recovery by creating mesh connections between all the involved sites and making intelligent load balancing decisions. Each site communicates with the others to exchange server and network metrics through Metric Exchange Protocol (MEP), at regular intervals. However, with the increase in number of peer sites, the volume of MEP traffic increases exponentially because of the mesh topology. To overcome this, you can use a parent-child topology. The parent-child topology also supports larger deployments. In addition to the 32 parent sites, you can configure 1024 child sites.

If the appliance that manages a site is the only Citrix ADC appliance in that data center, the GSLB site hosted on that appliance acts as a bookkeeping placeholder for auditing purposes, because no metrics can be collected. Typically, this happens when the appliance is used only for GSLB, and other products in the data center are used for load balancing or content switching.

These goals can be achieved by using parent and child GSLB sites.

Unlike other virtual servers configured on a Citrix ADC appliance, a GSLB virtual server does not have its own virtual IP address (VIP).

The data centers in a GSLB setup exchange metric with each other through the MEP, which is a proprietary protocol for the Citrix ADC appliance. The exchange of the metric information begins when you create a GSLB site. These metrics comprise load, network, and persistence information.

MEP is required for health checking of data centers to ensure their availability. A connection for exchanging network metric (round-trip time) can be initiated by either of the data centers involved in the exchange, but a connection for exchanging site metrics is always initiated by the data center with the lower IP address. By default, the data center uses a subnet IP address (SNIP) to establish a connection to the IP address of a different data center. However, you can configure a specific SNIP, virtual IP (VIP) address, or the NSIP address, as the source IP address for metrics exchange. The communication process between GSLB sites uses TCP port 3011 or 3009, so this port must be open on firewalls that are between the Citrix ADC appliances.

GSLB methods are algorithms that the GSLB virtual server uses to select the best-performing GSLB service. After the host name in the Web address is resolved, the client sends traffic directly to the resolved service IP address.

For GSLB methods to work with a remote site, either MEP must be enabled, or explicit monitors must be bound to the remote services. If MEP is disabled, RTT, Least Connections, Least Bandwidth, Least Packets, and Least Response Time methods default to Round Robin.

When you bind a remote service to a GSLB virtual server, the GSLB sites exchange metric information, including network metric Information, which is the round-trip-time and persistence Information.

If a metric exchange connection is momentarily lost between any of the participating sites, the remote site is marked as DOWN, and load balancing is performed on the remaining sites that are UP. When the metric exchange for a site is DOWN, the remote services belonging to the site are marked DOWN as well.

Figure 4 describes a DNS workflow from the client’s application access request via DNS, which will be handled by GSLB entities. As a DNS request comes into the global DNS server, which delegates the request subzone to each ADNS IP as subzone name servers. Upon reception of a DNS request by an ADNS service, the appliance checks for a GSLB virtual server bound to that domain. If a GSLB virtual server is bound to the domain, it is queried for the best IP address to which to send the DNS response. 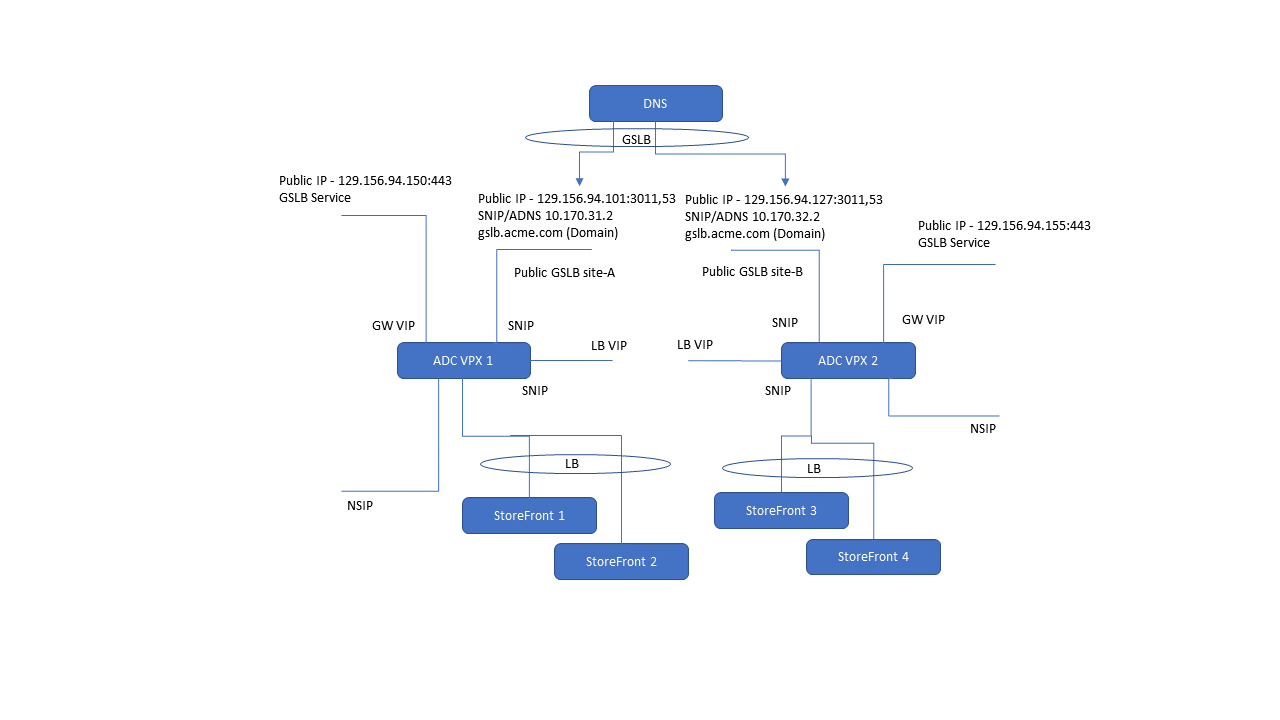 Those specific GSLB entities, as described in the earlier chapter, are:

Public IP Addresses: In summary, for public GSLB, if MEP and ADNS are listening on the same IP, then you need one new public IP that is NAT’d to the DMZ IP that is used for ADNS and MEP (GSLB Site IP).

The infrastructure for the solution provides a set of common components used by the entire solution.

The deliverable provides guidelines for the implementation and configuration references. However, it does not provide step-by-step instructions on how to install or maintain the components discussed. Therefore, Citrix Consulting recommends Client design and operations teams involved in the design and deployment to review the following documents, articles, and guides prior to implementing the environment provided for production. These documents, articles, guides, and more are available from the online Citrix Knowledge Center, online Citrix Product Documentation, or online Citrix Community.