Company A has always had a subset of remote users relying on the Citrix Virtual Apps and Desktops environment. These users used Citrix to securely access their apps and desktops when they were outside the company network. However, as Covid-19 happened, most of their end-users began working remotely and using Citrix Virtual Apps and Desktops. CompanyA has limited capacity in their on-premises data center and realizes that a fully on-prem solution can’t scale as quickly as they would like. Due to greater number of employees working remotely, their servers became overloaded, causing some of their employees to not be able to work. Therefore, they decided to come up with a solution that would give them the agility to scale.

CompanyA decided to migrate to Citrix Virtual Apps and Desktops service to provide users with the tools they need to work from anywhere. Citrix Virtual Apps and Desktops service allows them to keep their images on-premises and have Desktop-as-a-Service (DaaS) in the cloud. This allows them to be prepared when there is a failure with their on-prem VDAs or when there is increase demand causing their VDAs to be overloaded. They have decided to deploy DaaS as their business continuity solution. DaaS allows CompanyA to scale quickly without having to deploy more servers on-premises. It also reduces the administrative overload by having a solution that the vendor fully manages.

This reference architecture explains how CompanyA is planning their environment to ensure they have a business continuity strategy in place. They want a plan in place that is cost-effective and allows end-users to continue working even with unforeseen circumstances

Company A has defined a list of success criteria that formed the basis for the overarching design.

Note: CompanyA already has an established DR and business continuity plan in place for other non-Citrix components on which Citrix is dependent (Active Directory, file shares, application back-ends, and so forth)

Based on the preceding requirements, CompanyA created the following high-level conceptual architecture. This architecture meets all the prior requirements while giving CompanyA the foundation to expand to more use cases in the future.

The architecture framework is divided into multiple layers. The framework provides a foundation for understanding the technical architecture for the flexible work deployment scenarios. All layers flow together to create a complete, end-to-end solution.

At a high level:

User Layer: The user layer describes the end-user environment and endpoint devices that are used to connect to resources.

Resource Layer: The resource layer authorizes specific SaaS, web, and virtual resources for defined users and groups and the security policies associated with the resource.

Hosting Layer: The hosting layer details how components are deployed on hardware, whether that is on-premises, cloud, or hybrid cloud.

It is seamless for the user no matter where the resources are hosted. Workspace app can either be installed in the user’s endpoints, or they can use the web-based workspace app that doesn’t require them to install anything.

As a part of their migration to Citrix Cloud, CompanyA decided to migrate to Gateway service as an HDX proxy to provide users with secure remote access to their resources. This alleviates the infrastructure and management overhead of maintaining the gateway on-prem. To make the switch, CompanyA followed this migration guide.

CompanyA continues to use their existing methods of authentication that users are familiar with. The end users authenticate to Citrix workspace and get access to all their resources. Users get the same experience whether they are launching cloud or on-premises back-end resources. CompanyA decided to have both the machines and the users’ accounts joined to the organization’s on-premises Active Directory. The Citrix Virtual Apps and Desktops service Azure subscription (SD-WAN virtual appliance installed) and the customer’s on-premises (SD-WAN branch appliance installed) locations are connected to each other using SD-WAN. The customer manages these appliances using the SD-WAN Orchestrator in Citrix Cloud.

Citrix Virtual Apps and Desktops service allows customers the flexibility to deploy images in their own customer-managed Azure. However, CompanyA has decided to deploy in the Citrix Managed Azure because they wanted a business continuity solution that was fully managed by the vendor. While Citrix provides base images that CompanyA can use, they only include the operating system, and the Virtual Delivery Agent installed on them. Therefore, they decided to import their own images, which include the organization’s apps and configurations. CompanyA currently has deployed Windows ten multi-session machines to reduce the number of machines needed with the “medium” workload, which supports ten concurrent sessions.

When end users access DaaS resources, those resources still need to be able to communicate with app data and file servers in CompanyA’s data center. Although CompanyA can connect back to their datacenter using Express Routes, they have chosen to deploy SD-WAN instead to enhance the traffic performance while in transit. They also want to the flexibility to be able to deploy to multiple cloud sites in the future.

High availability and great user experience are important for CompanyA, and SD-WAN can help in both areas. Citrix SD-WAN does per-packet QOS and analyzes traffic in real-time on a per-packet basis, including latency, loss, and jitter. By bonding two relatively inexpensive internet connections (whether two landlines or a landline plus 4G/LTE), Citrix SD-WAN can deliver not only the reliability of much costlier MPLS circuits but also higher bandwidth, lowest possible latency, and various Quality-of-Service features.

More information on SD-WAN can be found here.

CompanyA has chosen to use Citrix Virtual Apps and Desktops Service because it gives them the flexibility they need to deploy resources from multiple resource locations from a unified management console. It also reduces the administrative overhead to deploy and manage their virtual apps and desktop environment. It allows them to minimize hardware costs and deploy DaaS resources for a fully managed solution.

CompanyA has designed its environment to overcome on-prem issues when machines become overloaded or unavailable. Therefore, it is important that a contingency plan is in place in case the cloud services fail.

It is important for CompanyA that their users don’t experience lost productivity due to outages or cloud issues. Therefore, they have turned on service continuity within Citrix cloud. Service Continuity allows users to connect to resources that are reachable during outages or when Citrix Cloud components are unreachable. This functionality has given CompanyA peace of mind to ensure that even in the rare occasion of a cloud outage, their user are still productive. Service continuity improves the visual representation of published resources during outages by using Progressive Web Apps service worker technology to cache resources in the user interface. Service continuity indicates which resources are available during an outage.

More information on how Service Continuity works can be found here. 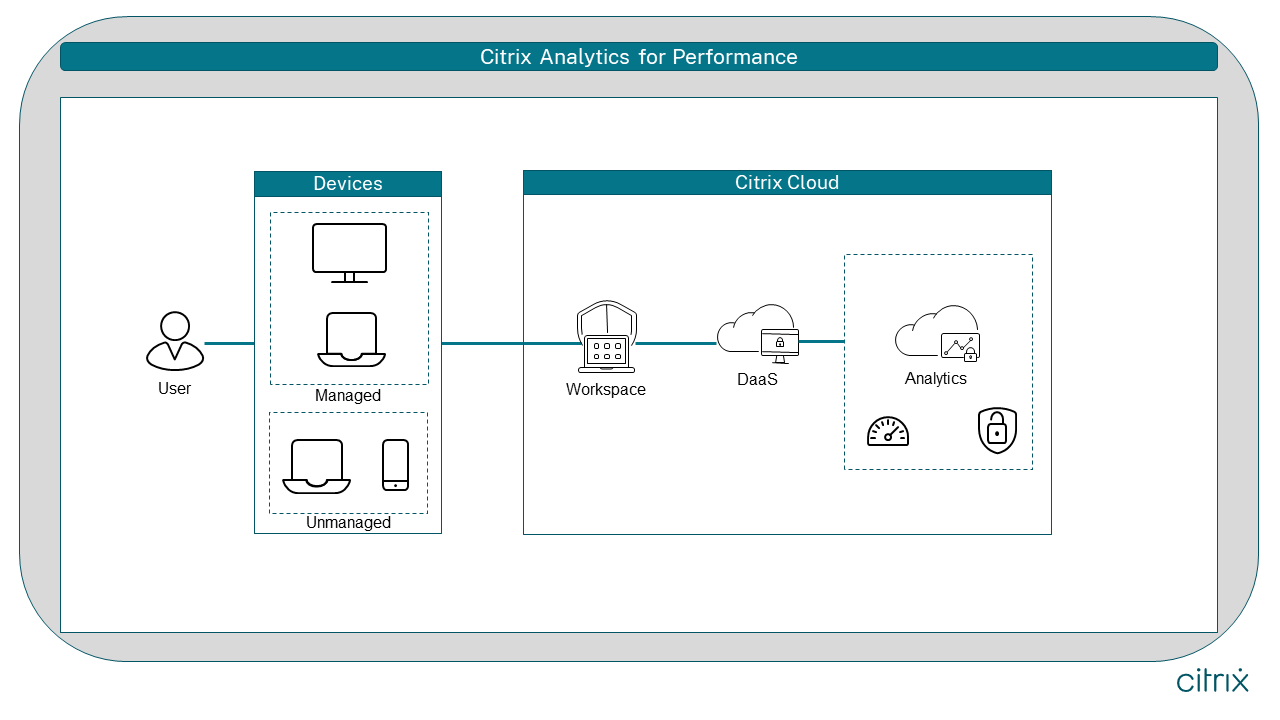 CompanyA chose to use Citrix Analytics for Performance to be able to proactively see if their users were having a bad user experience. Through the machine-learning anomaly alerts, administrators are notified if there are a high number of users experiencing a poor experience and are given a potential root cause to troubleshoot. They use Citrix Analytics for reactive troubleshooting. Through its advanced search functionality, they can use Analytics to figure out what exactly is causing the issue. Admins can also use it to identify black-hole or overloaded machines.

CompanyA can monitor both their on-premises and cloud sites and proactively resolve the end user’s experience. 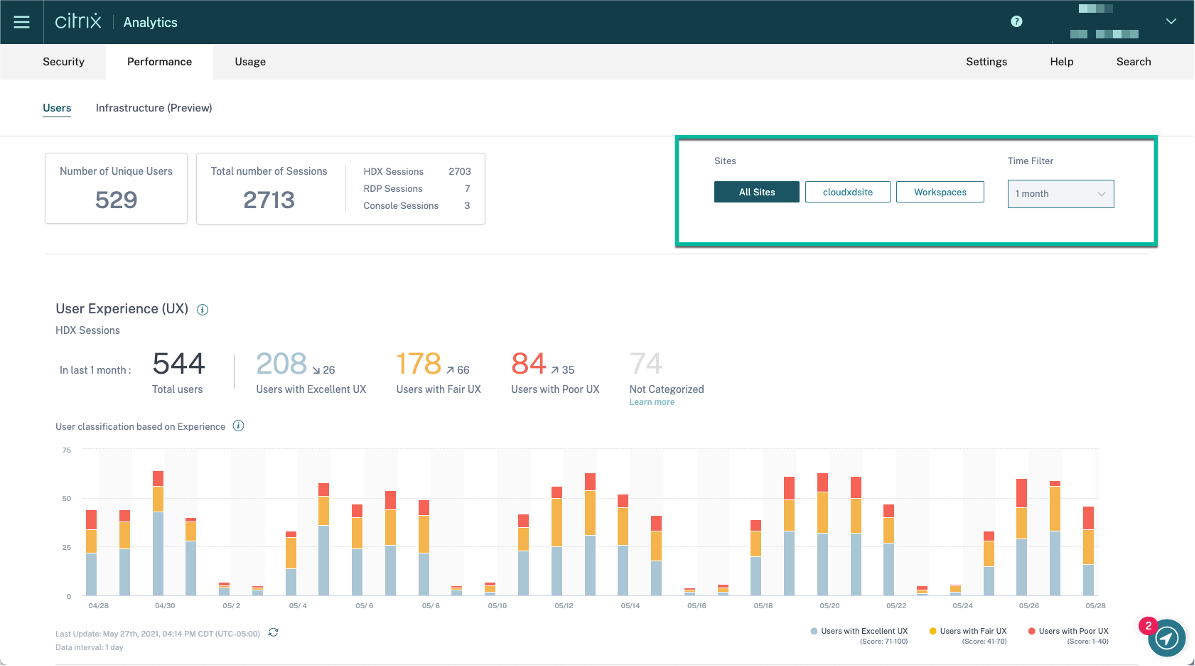 Administrators go into Analytics on a weekly basis. They click the users experiencing a poor experience and see what insights Analytics provides to troubleshoot. 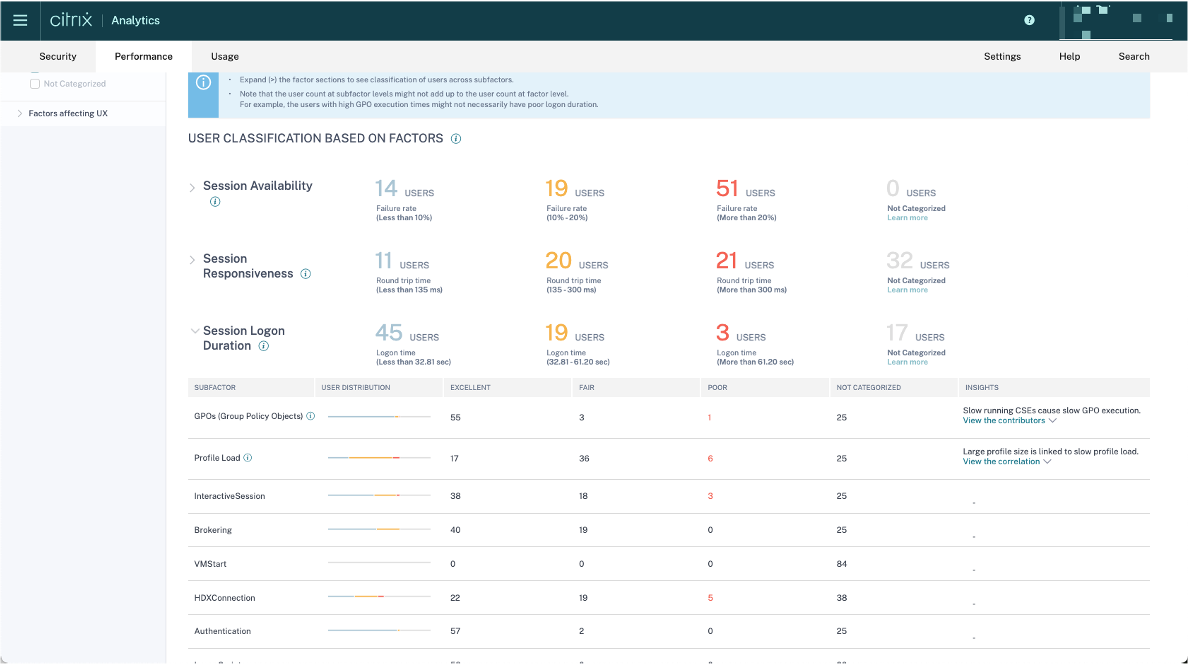 They look at the failure insights to troubleshoot any black hole machines and to address any communication errors occurring in the environment. 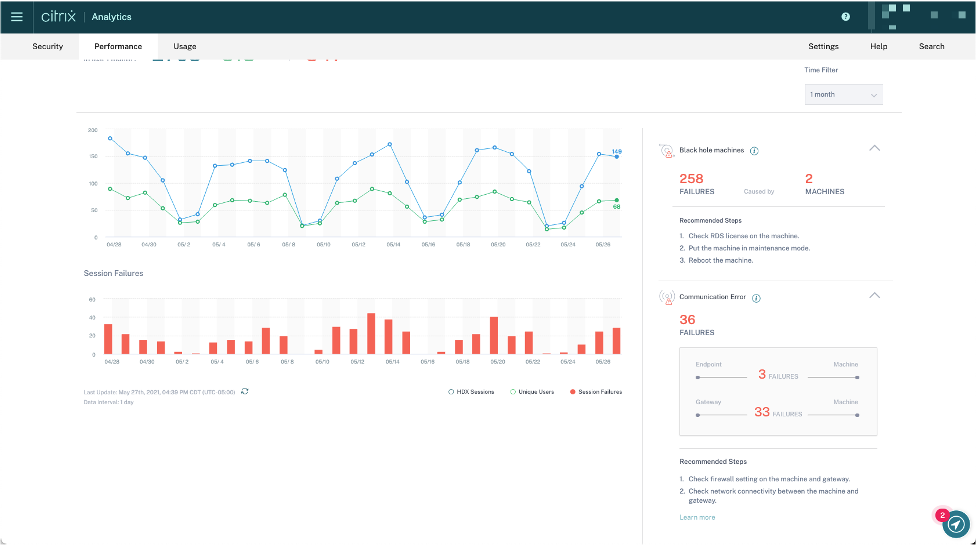 Lastly, they check the machine availability and whether it has improved in the past week. 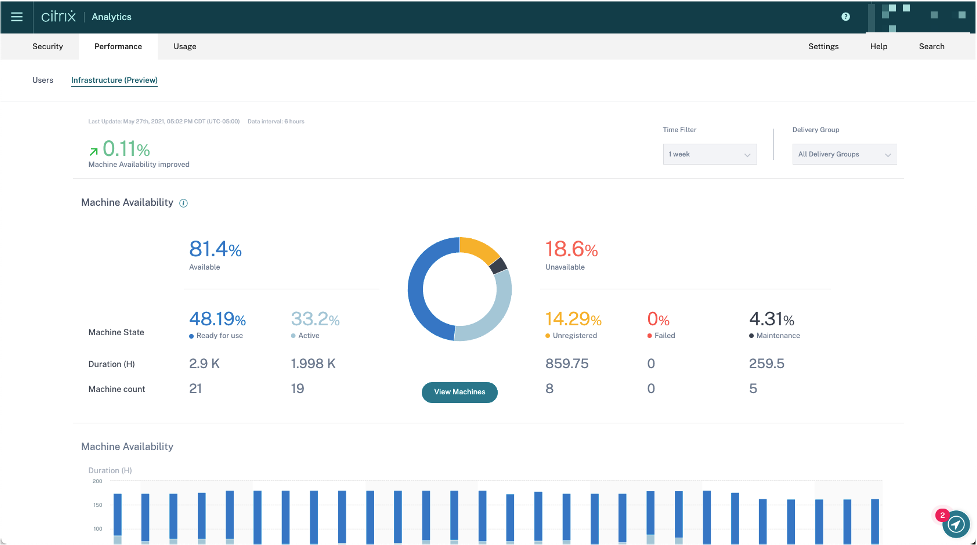 More information on Citrix Analytics can be found here.

CompanyA chose to deploy Autoscale to optimize cloud costs. Autoscale allows you to intelligently use, allocate, and deallocate resources. To optimize costs, CompanyA uses the Restrict Autoscale functionality. This functionality allows CompanyA to use the on-premises machines first and then once the on-premises machines are unavailable. The cloud machines are used. To do this CompanyA uses tag restriction with zone preference. Tag restrictions specify machines to be power managed by Autoscale. Zone preference specifies machines in the preferred zone to handle user launch requests.

CompanyA does the following:

More information about Autoscale can be found here