This document serves as a guide to prepare an IT organization for successfully evaluating Unified Communications (UC) in desktop and application virtualization environments using Microsoft Teams. Over 500,000 organizations, including 91 of the Fortune 100 (as of Mar 2019) use Teams in 44 languages across 181 markets. Without proper consideration and design for optimization, virtual desktop and virtual application users will likely find the Microsoft Teams experience to be subpar. Citrix provides technologies to optimize this experience, to make Teams more responsive with crisp video and audio, even when working remotely in a virtual desktop. However, with multiple combinations of Teams infrastructures, clients, endpoint types, and user locations one must find the right “recipe” to deliver Teams optimally.

The Citrix® HDX™ Optimization for Microsoft® Teams offers clear, crisp 720p high-definition video calls @30 fps, in an optimized architecture. Users can seamlessly participate in audio-video or audio-only calls to and from other Teams users, Optimized Teams’ users and other standards-based video desktop and conference room systems. Support for screen sharing is also available. This document guides administrators in evaluating the Teams delivery solution in their Citrix environment. It contains best practices, tips, and tricks to ensure that the deployment is the most robust.

This choice is often what causes the most confusion about delivering a Microsoft Teams experience in a Citrix environment. The main reason is that without optimization the media must “hairpin” from your client to the server in the data center and then back to the endpoint. This additional traffic can put significant load on the server (especially for video) and can cause delay and an overall degraded experience, especially if the other party in a Teams call is originating from a user in a similar virtualized experience. This method for delivering a Microsoft Teams experience is referred to as “Generic” delivery.

The preferred method of delivery is the “Optimized” method. In this case, the architect or administrator uses Optimization for Microsoft Teams in their environment. The “Optimized” method is like splitting the Teams client in two, as illustrated in the following comparison diagram. The user interface lives inside the virtual host, and is seen completely in the virtual desktop or application display. However, the media rendering, or media engine is separated off to run on the endpoint. This method allows for an exquisite rendering of the audio and video and a great desktop sharing experience.

Choosing the right Teams optimization for your environment

Optimization for Teams is not a “one size fits all” technology. For the Teams desktop app, with Windows clients, the Citrix HDX Optimization for Microsoft Teams with Citrix Workspace app is the way to go. With Linux and Mac clients being on the roadmap. For Web based teams, with Windows and Linux clients using a Chrome browser, the Citrix HDX Optimization for Microsoft Teams with Browser Content Redirection would be the right solution. For the remaining OS and Teams delivery format combinations, the generic delivery with the Fallback to Media over HDX is the option. Optimization for mobile OSs is not available right now. Typically, mobile users who desire access to Teams on their devices use Teams native apps from the appropriate app store. 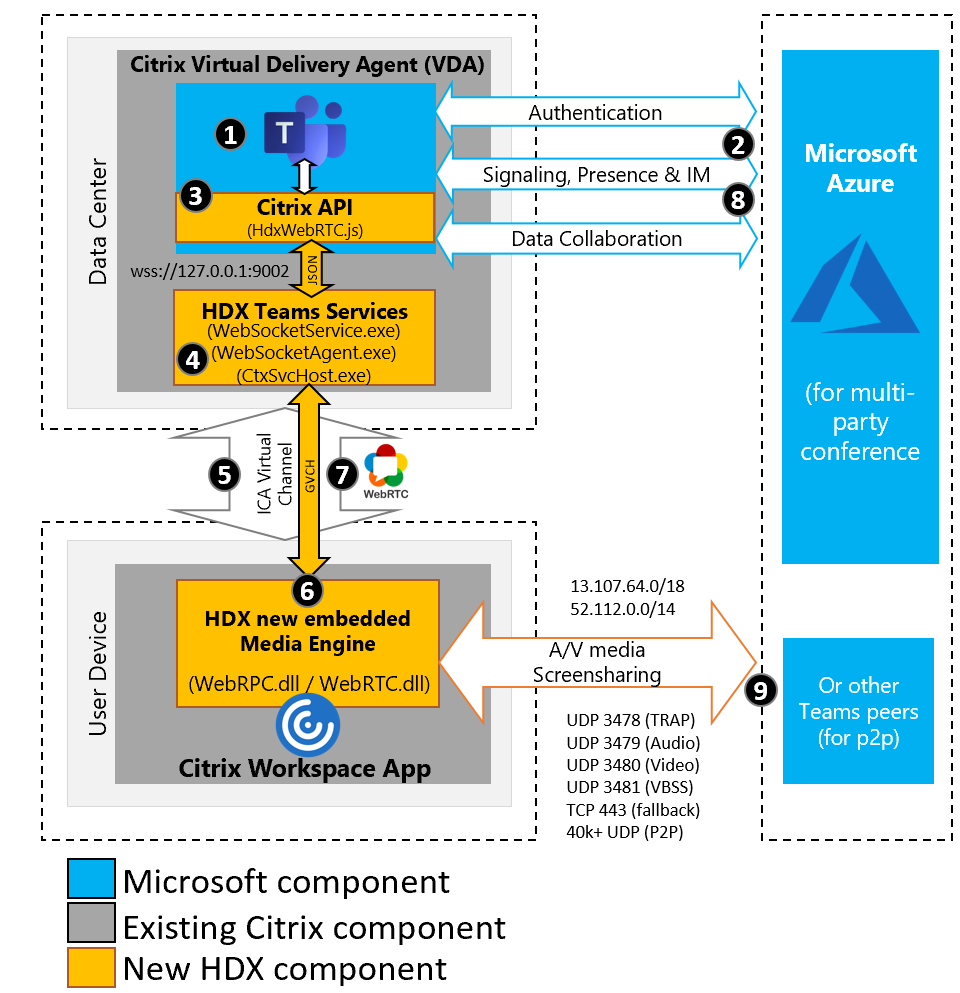 For a detailed list of system requirements, please check the Microsoft Teams article in edocs.

The installation procedures are simple

The VDA installer automatically installs the following items, which are available on the Citrix installation media in the Support folders

For Windows Server, if you did not install and enable the Remote Desktop Services roles, the installer automatically installs and enables those roles.

Install the Citrix Virtual Delivery Agent on the host or base image, following the instructions here.

Note: Install Microsoft Teams after the VDA is installed. Teams installer has a detection logic for underlying VDAs, which is critical for optimization.

The installation must be done on the golden image of your catalog or in the office layer (if you are using App Layering). We recommend you follow the Microsoft Teams installation guidelines. Avoid installing Teams under AppData (unless you are using dedicated/assigned virtual desktops). Instead, install in C:\Program Files by using the ALLUSER=1 flag, which is the recommended mode for pooled VDI/Windows Server/Windows 10 multiuser. For more information, see Install Microsoft Teams using MSI

If Teams was installed in user mode before on the image:

The Citrix Workspace app for Windows has the optimization components built into it. When you install the application on your client, the components are already present.

Follow the instructions, to install the Citrix Workspace app for Windows here.

To enable optimization, ensure the Microsoft Teams redirection Studio policy is set to Allowed The policy is enabled by default 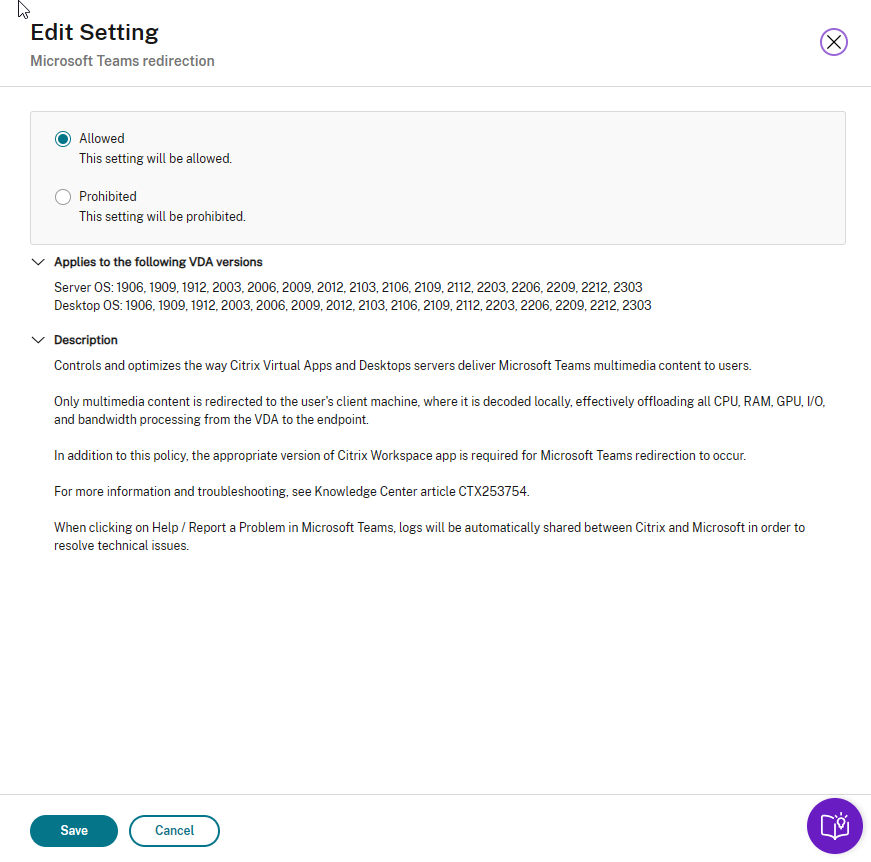 Note: In addition to this policy being enabled, HDX checks to verify that the version of Citrix Workspace app is equal to or greater than the minimum required version. If both conditions are met, the following registry key is set to 1 on the VDA. The Microsoft Teams application reads the key to load in VDI mode

Microsoft Teams relies on Media Processor servers in Microsoft Azure for meetings or multiparty calls. Microsoft Teams relies on Azure Transport Relays for scenarios where two peers in a point-to-point call do not have direct connectivity or where a participant does not have direct connectivity to the Media Processor. Therefore, the network health between the peer and the Office 365 cloud determines the performance of the call.

We recommend evaluating your environment to identify any risks and requirements that can influence your overall cloud voice and video deployment. Use the Prepare your organization’s network for Microsoft Teams page to evaluate if your network is ready for Microsoft Teams.

Optimized traffic for peer to peer connections is routed on higher ports (40 K+ UDP) at random, if they are open. For more info read.

Be sure that all computers running the Workspace app client with Teams optimization can resolve external DNS queries to discover the TURN/STUN services provided by Microsoft 365 (for example, worldaz.turn.teams.microsoft.com) and that your firewalls are not preventing access.

For support information, see Support section of our documentation.

Connect to the Office 365 network as directly as possible from the branch office. Bypass proxy servers, network SSL intercept, deep packet inspection devices, and VPN hairpins (use split tunneling if possible) at the branch office. If you must use them, make sure RTP/UDP Teams traffic is unhindered. Plan and provide enough bandwidth. Check each branch office for network connectivity and quality. The WebRTC media engine in Workspace app (HdxTeams.exe) uses the Secure RTP protocol for multimedia streams that are offloaded to the client. The following metrics are recommended for guaranteeing a great user experience

In terms of bandwidth requirements, optimization for Microsoft Teams can use a wide variety of codecs for audio (OPUS/G.722/PCM/G711) and video (H264/VP9). The peers negotiate these codecs during the call establishment process using the Session Description Protocol (SDP) Offer/Answer.

Citrix minimum recommendations for bandwidth and codes for specific type of content are:

(*) Opus supports constant and variable bitrate encoding from 6 kbps up to 510 kbps, and it is the preferred codec for Peer to Peer calls between two VDI users

To update the Teams desktop client, Uninstall the currently installed version, then install the new version.

To uninstall the Teams desktop client MSI, if it was first installed using the per-machine mode, use one of the following commands:

Microsoft Teams relies on video-based screen sharing (VBSS), effectively encoding the desktop being shared with video codecs like H264 and creating a high-definition stream. With HDX optimization, incoming screen sharing is treated as a video stream, therefore if you are in the middle of a video call and the other peer starts to share their desktop, their camera video feed is paused and instead the screen sharing video feed is displayed. The peer must then manually resume their camera sharing.

In cases where CDViewer is in full screen mode and spanning across multi-monitor setups, only the primary monitor is shared. Users must drag the application of interest inside the virtual desktop to the primary monitor for it to be seen by the other peer on the call.

Here are a few ways to resolve the issues users may face:

Resolution: Validate that the HDXTeams.exe process is running on the VDA. If the process is not running then we need to restart Citrix Redirection Services, do the following - in this order - to check if HdxTeams.exe is getting launched

Symptom: No incoming ring notification tone on a Citrix Session

Cause: Audio being played on the VDA host

We support Microsoft Teams infrastructures: whether on-prem or Office 365 (cloud) as long as configuration allows for successful internal and external client communication.

We have walked through the way to go about evaluating the Citrix Optimization for Teams and pointed you to the resources for deploying the rest. The Optimization for Microsoft Teams greatly increases server scalability and offers zero degradation in audio-video quality and optimal network bandwidth efficiency. It is the Microsoft recommended solution for a VDI deployment. If there are Linux clients in your environment, then it’s the only solution, that Microsoft and Citrix, jointly support.