Citrix Gateway service for HDX Proxy provides users with secure remote access to Citrix Virtual Apps and Desktops without having to deploy Citrix Gateway in the on-premises DMZ or reconfigure firewalls. Citrix hosts the entire infrastructure overhead of managing remote access in the cloud.

Citrix Virtual Apps and Desktops have served Enterprises well for decades, yet they have extra requirements to provide remote access such as: 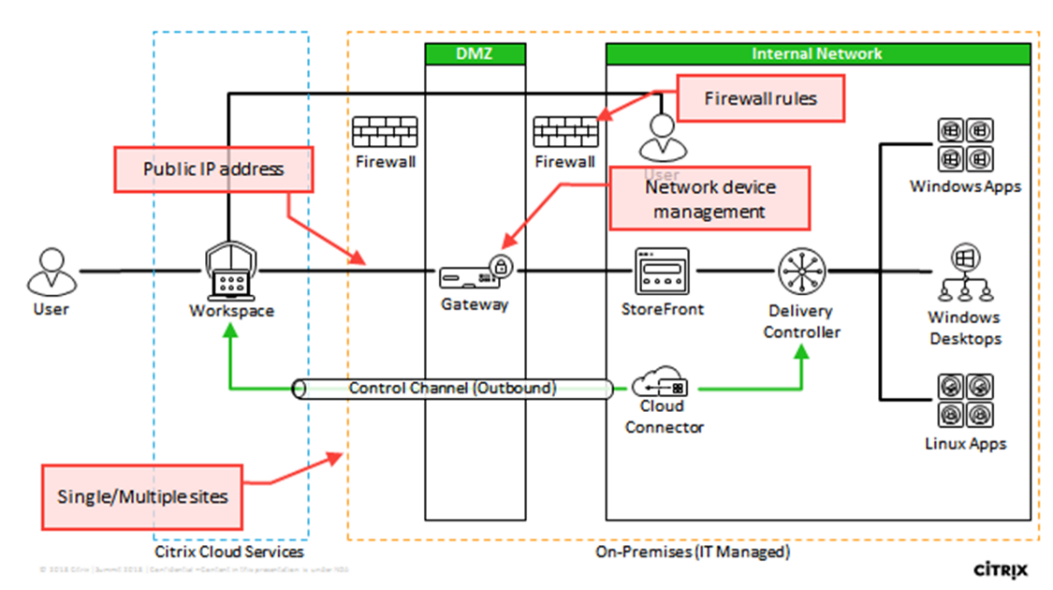 With Citrix Cloud and Citrix Gateway service Enterprises now can provide remote access to Citrix Virtual Apps and Desktops without those additional requirements along with other benefits: 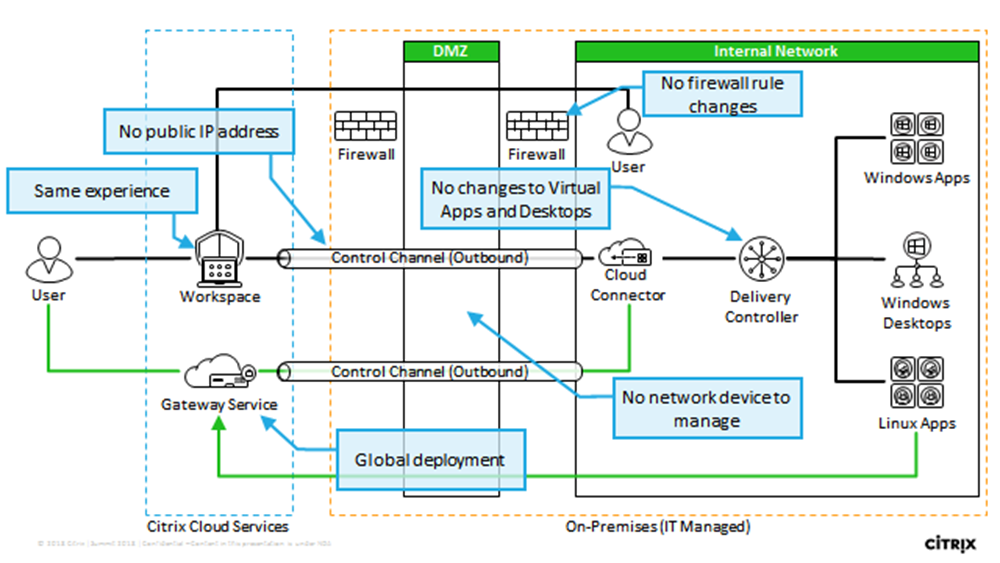 The Citrix Gateway service is a part of the Citrix Cloud Services to provide secure remote access. It has been developed upon for more than a decade, all the while being used by the largest companies in the world. It relies on the Citrix Optimal Gateway Routing to direct clients to the closest global Citrix Gateway service POP. From there, it coordinates secure connectivity between Citrix Workspace clients and virtualization resources to deliver sessions with the lowest latency and the best user experience possible.

Each Cloud Connector supports a limit of 1,000 concurrent sessions, and while adding more connectors grows capacity Citrix provides a more efficient solution to scale. Rendezvous protocol enables HDX sessions to be set up, through secure TLS transport, directly from the Virtual Delivery Agent (VDA) to the Citrix Gateway service without going through the Cloud Connector first. It is available in Citrix Virtual Apps and Desktops release 1912+ and can be enabled through a Citrix Policy setting. If the Rendezvous protocol is enabled and it cannot reach the Gateway service for any reason, it falls back to proxying traffic through the Cloud Connector.

Citrix Gateway service operates in multiple POPs. If for any reason a POP goes down or connectivity is degraded past thresholds, Citrix Optimal Gateway Routing responds to subsequent DNS queries with the public IP address of the next closest POP. The Workspace app and the Citrix Virtual Apps and Desktops controller will initiate retries and timeouts based on session connection and timer settings.

Transitioning access from your On-premises Gateway to Citrix Gateway service begins with creating your Citrix Cloud environment. Afterwards you log in to your environment from Windows Server instances, with network access to your Citrix Virtual Apps and Desktops controllers. Then you can install Citrix Cloud Connectors to provide connectivity to Citrix Cloud. 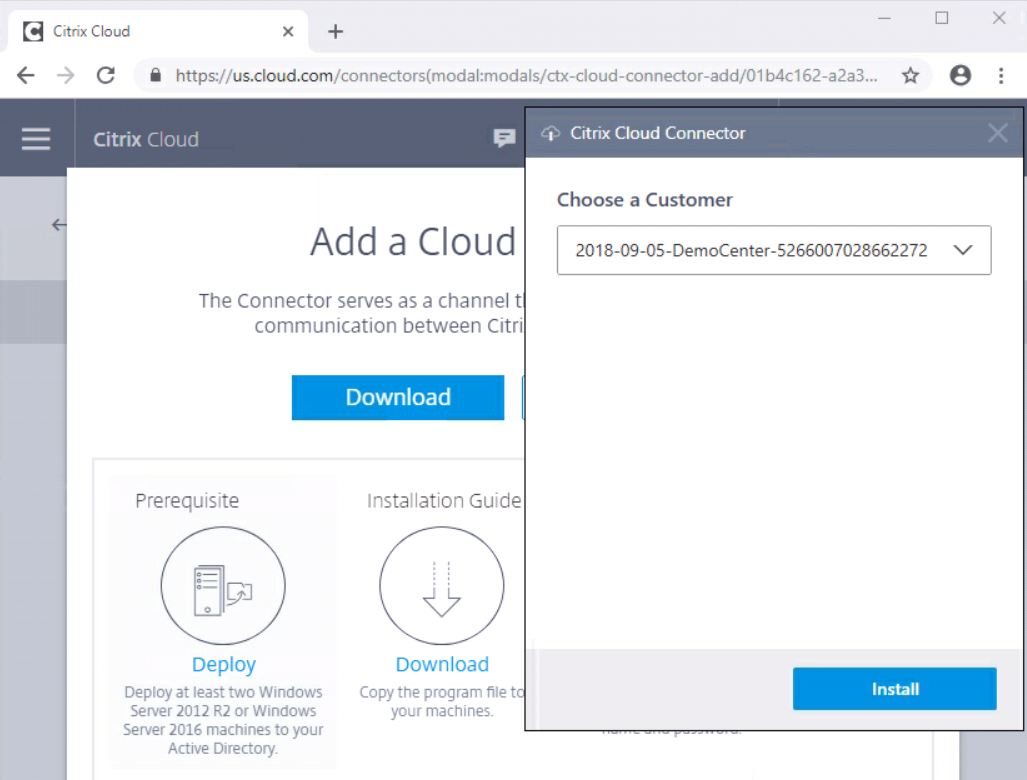 Once the Citrix Cloud Connectors are installed and up at your Resource Location the Citrix Workspace can be configured in Citrix Cloud. After specifying whether Authentication occurs using Active Directory (AD) or Azure Active Directory (AAD), and implementing any desired customizations to the Workspace app, Gateway, and Citrix Virtual Apps and Desktops On-Premises Sites must be enabled under Service Integrations. Then the site can be added and configured. The site configuration includes: specifying whether the controller is pre or post version 6.5, specifying the FQDN of the controller hosted in your Resource Location, verifying the domain identified through the Citrix Cloud Connector install, and specifying that the Gateway service is used for connectivity. 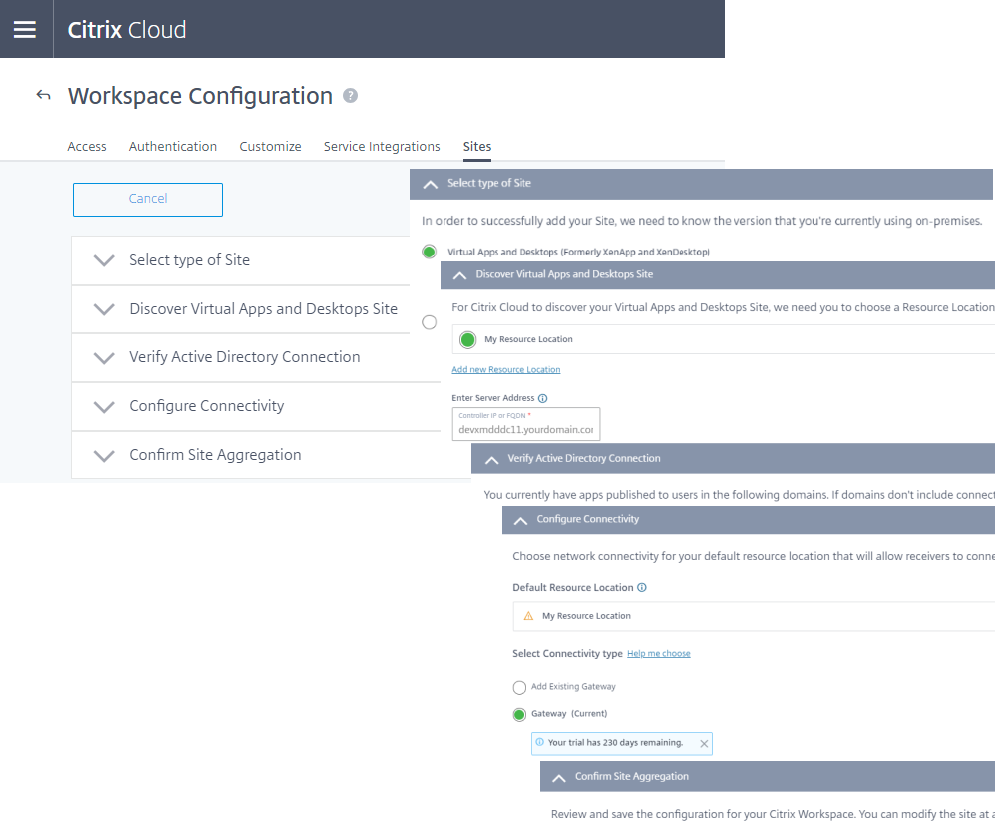 After the Citrix Workspace is configured in Citrix Cloud the new FQDN can be added to the Workspace app. Users can log in with the same AD credentials they would use with the On-premises Citrix Gateway and have the same apps and desktops enumerated. 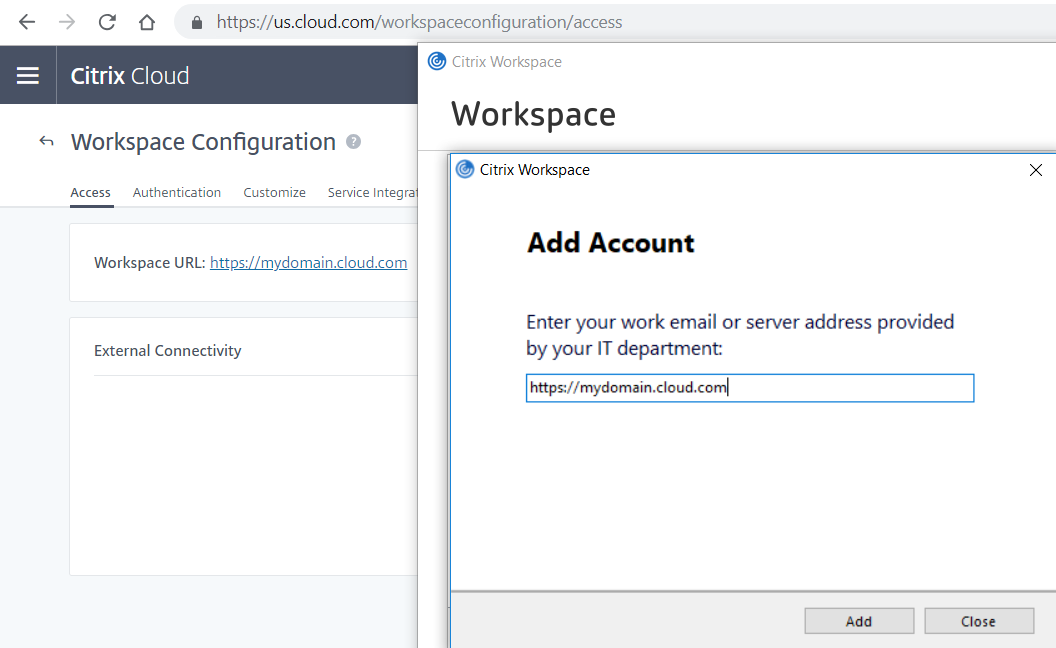 When a user launches an app within Workspace app, a DNS query for a FQDN hosted on Citrix Gateways, is relayed to the endpoint’s local DNS name server. It typically relays it to an ISP DNS name server which makes a recursive query. As the authoritative name server Citrix Gateway Service returns the public IP address of the nearest POP based on the location of the IP address of the ISPs name server/s that made the recursive query. Therefore it is essential that the name server is in close proximity to the endpoint. If not sessions may incur performance issues.

It is recommended to exclude Gateway Service FQDNs from any DNS filtering and traffic inspection (*.nssvc.net / *.g.nssvc.net / *.c.nssvc.net)

Proxies can cause the following issues:

To implement it with Zscaler:

To implement it with Citrix Gateway VPN make the following changes:

Citrix Gateway service simplifies the requirements to access On-Premises Virtual Apps and Desktops and thus reduces the needed infrastructure and the operational overhead to maintain it. The need to maintain gateways with SSL Certificates and public IPs in multiple POPs are eliminated. Admins can then focus more on the management of their own IT business service priorities.