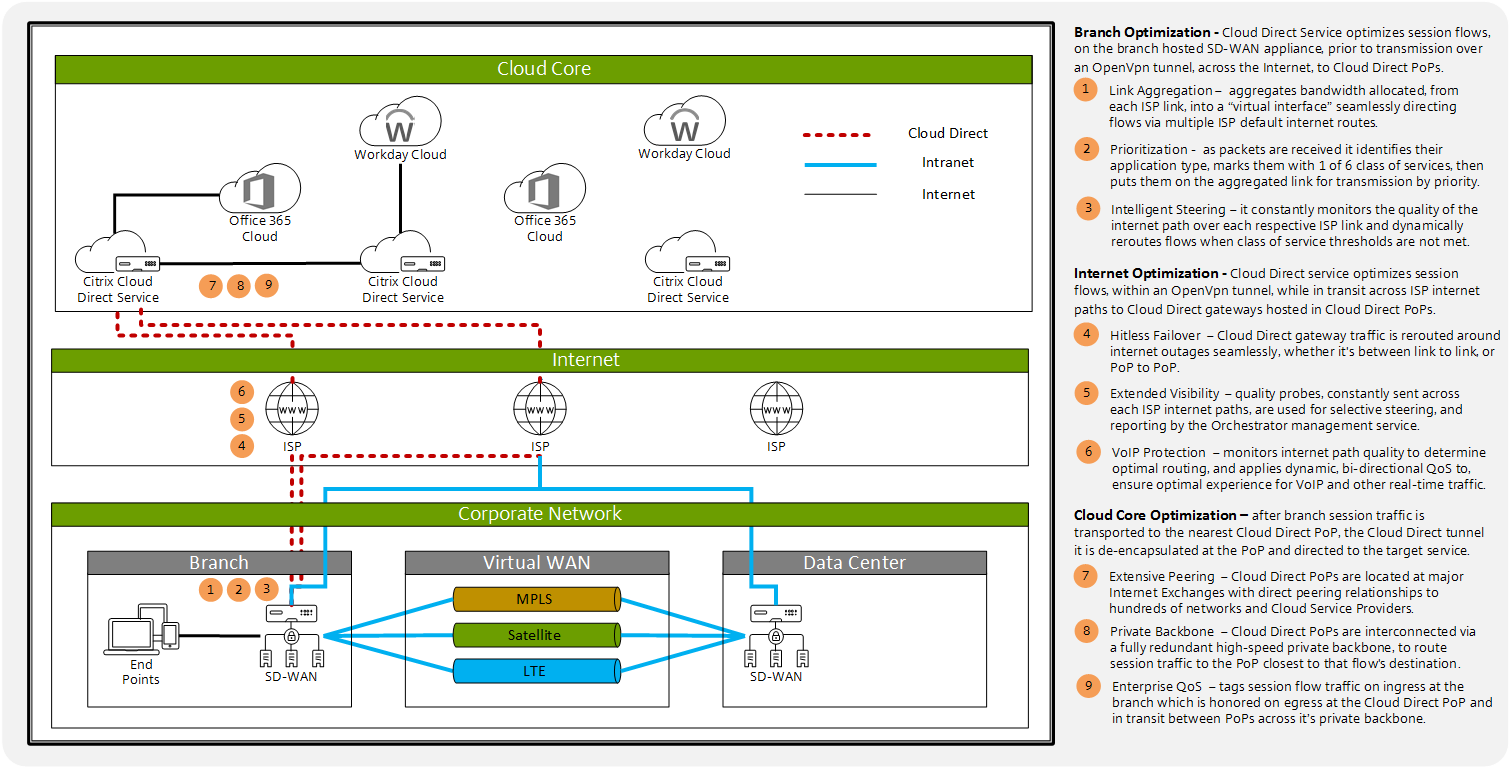 The Cloud Direct service virtually bundles multiple branch office internet access links such as DSL, Cable, and LTE. It creates redundant UDP tunnels. On one end is a Cloud Direct service process, hosted on branch office SD-WAN appliances. On the other end are gateways hosted in Cloud Direct service PoPs. The gateways are hosted in Points of Presence (PoP) at Internet Exchanges, near popular SaaS sites. It is able to utilize and monitor each link within the bundles to mitigate against data link or network issues in the first mile. The first mile is the segment of the circuit between the branch office and the ISP PoP where issues often occur. Further it aides with optimal transport of sessions throughout their path across the internet to target sites in the cloud.

It can protect delivery sensitive VoIP traffic by applying bi-directional quality-of-service (QoS) prioritization and shaping with class-of-service (CoS) tags. It sends that marked traffic through the links with the least latency, loss, and jitter, improving the mean opinion score (MOS). In parallel it automatically identifies other traffic types and applies pertinent QoS tags to map to one of six classes of service. Then, it prioritizes traffic for egress transmission. Once on the Cloud Direct network infrastructure that traffic is transported, according to its CoS marking, over a high-speed private delivery network.

When Enterprises subscribe to SaaS services in the cloud, they can expect to have access to multiple mirror sites, hosted on public clouds, with global PoPs. Therefore, providing optimal performance for users entails transporting traffic from their endpoint to the nearest PoP. For most enterprises to accomplish this they must solve access for distributed branch offices.

SaaS backhauled via the Data Center

In a traditional model, backhauling branch internet traffic worked when the minority of web traffic was not performance sensitive. Now with a significant number of business-critical applications, powered by SaaS, data center centric network infrastructure must be redesigned.

Individual applications can be routed directly to the internet, to reduce latency, with Citrix SD-WAN. However, the internet still lacks quality mechanisms to transport enterprise SaaS optimally. The internet delivers all traffic indiscriminately with no preference or in a “best effort” manner.

Accessing business critical SaaS applications over the internet is problematic since traffic delivery over the internet is best effort by default. It is a collection of service providers connected using various network equipment, administrators, and circuits with varying levels of reliability. Therefore, SaaS connections are susceptible to disruption due to outages, oversubscription, and congestion. 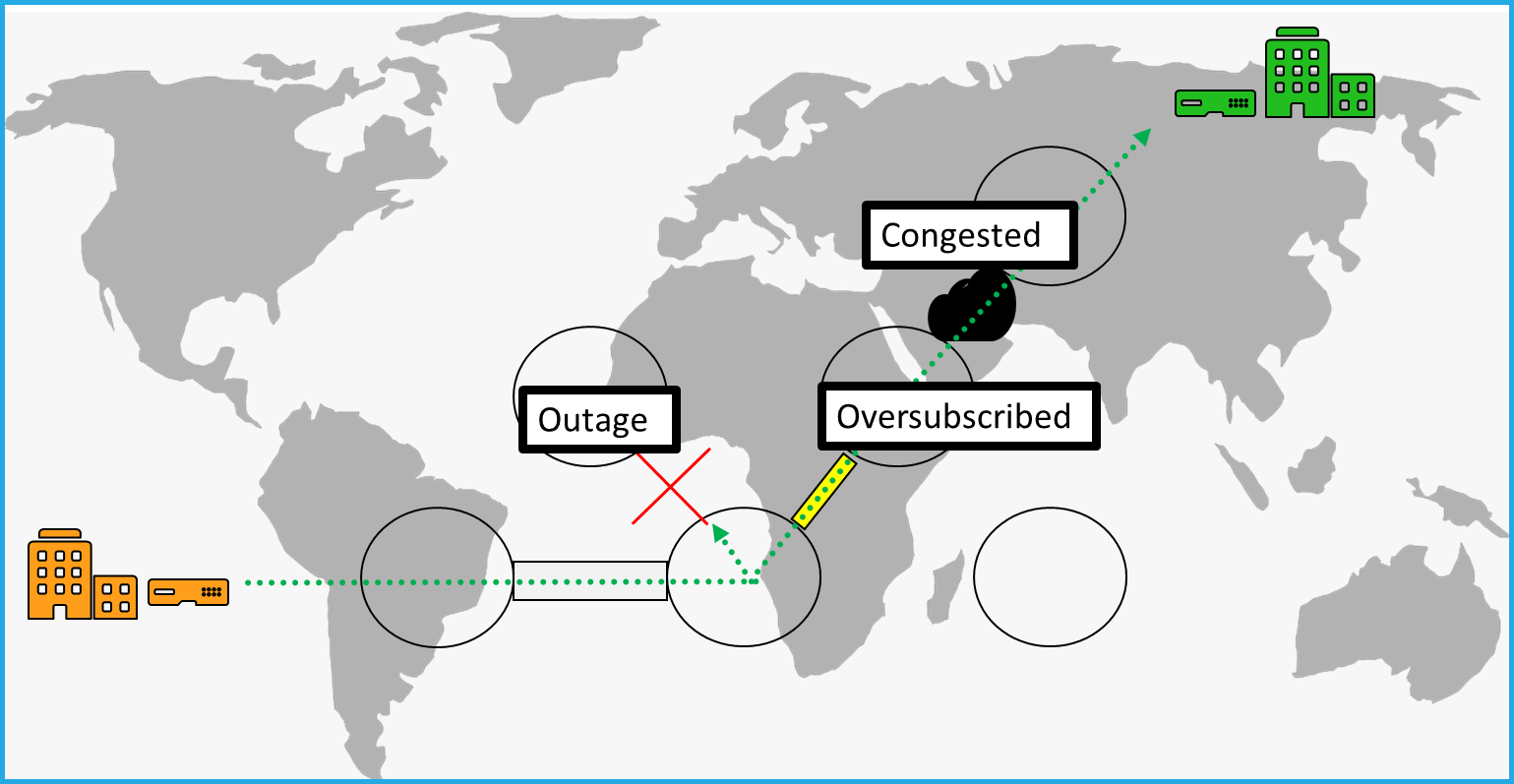 For branch office users to reach public SaaS services their sessions must traverse the internet. This network is composed of a vast and complex web of circuits, service providers, network equipment, data centers, and routing domains. The internet is considered a “best effort” network because there are no guarantees of transport reliability or quality. Therefore, trusting delivery over the best effort internet is a risk.

Cloud Direct branch tunnels terminate into redundant Cloud Direct PoPs. These PoPs are purpose-built for reliability, performance, and optimal connectivity. Each PoP consists of scalable, fully redundant servers connected to carrier-grade switches and routers. They are connected to multiple upstream transit circuits and interconnected via a diverse and dedicated private high-speed backbone.

1st mile circuits are access links to ISPs that are typically lower speed, lower cost, and subsequently lower reliability compared to circuits used by large enterprise and data centers. While the Citrix SD-WAN appliances connect to the modems via ethernet the data link technologies vary including:

Branch office optimization occurs on the Citrix SD-WAN appliance located in the local office. Here it interfaces with the ISP access links. The physical and data link layers vary including DSL, Cable Modem, or Mobile LTE. They ultimately provide internet access on the network layer. The segment is typically the shortest portion of the overall journey to the cloud, however many issues can occur over it that can affect quality. The Cloud Direct service provides several features to optimize access at the branch.

With link aggregation, the Citrix SD-WAN appliance treats up to four links as a single bundle and load balances traffic according to capacity. A typical router can have multiple default routes to each respective ISP. It may only select one as the active primary, or route traffic across multiple routes unevenly.

Citrix SD-WAN can allocate a fixed portion of each circuit to the Cloud Direct service or general internet use. Cloud Direct utilizes all available bandwidth allocated to the service. Probes continuously monitor availability. Upon detecting a link outage, the “virtual” aggregated circuit is condensed by removing the “bad link” from the bundle, and rerouting sessions over “good links”. Sessions are rerouted at the network layer avoiding interruption to user sessions.

Traditionally branch routers may transmit traffic on a First-In-First-Out basis, or otherwise rely on prioritization tags coming from the LAN which may be inconsistent or inexistent. The Citrix SD-WAN appliance hosted Cloud Direct service process prioritizes egress transmission queues according to CoS. On reception they automatically identify traffic by 1 of 6 types, apply a QoS tag, and prioritize for appropriate handling.

The traffic is prioritized according to class. This ensures that the highest priority sessions are sent to the egress transmit queues first. The limited bandwidth of the local DSL, Cable, or LTE access links may be the bottleneck over the entire path to the cloud. Therefore, ensuring appropriate prioritization of traffic is critical to delivering maximum end-to-end QoS.

Traditionally branch routers consider a link “up” state indication that it can handle the full bandwidth associated with the interface, irrespective of its actual throughput capability. The Cloud Direct service sends probes at 10 millisecond (ms) intervals over each link, constantly monitors latency, jitter, loss, congestion, and state.

Changes in state can vary between black out and brown out. A black out is when an entire link goes down. A brown out is when limited throughput or performance falls below the QoS that the class requires. When a state change is detected the service seamlessly reroutes sessions over to a “good” link. Intelligent steering avoids an impact to session connections, allowing it to maintain a good user experience.

Peering is a voluntary interconnection of internet autonomous systems to expedite traffic between hosted content and users. It is typically settlement-free meaning neither provider pays the other rather the access to each other’s routes is mutually beneficial. The average user or enterprise accessing the internet through a typical service provider must pass through several hops before reaching their desired destination. Having direct access to service providers with Extensive Peering agreements reduces their traffic hops and ultimately reduces their session latency. 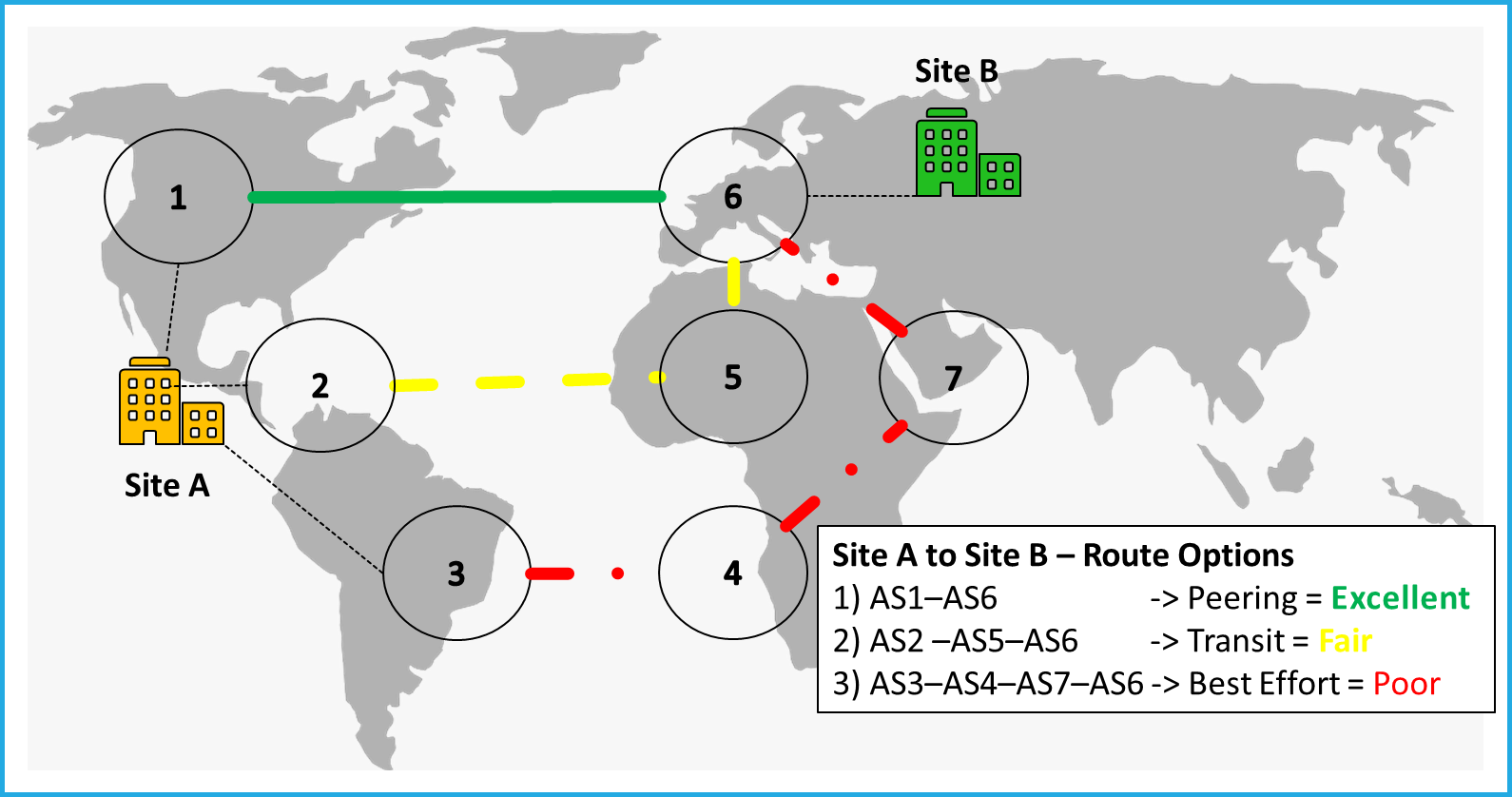 The general Internet lies between the branch office Citrix SD-WAN and Cloud Direct PoPs. Most of the segment is up to local ISPs to manage and traffic is typically transported as best effort with no quality or service level agreements. Nevertheless, the Cloud Direct service includes several benefits to optimize traffic while in route.

On the branch Citrix SD-WAN appliance the tunnel is sourced from a fixed LAN side public IP address. Each ISP circuit, connected to the SD-WAN appliance, directs traffic over a different path across the internet to the Cloud Direct PoP. When a failure occurs over one path, Cloud Direct reroutes sessions over one of the other available paths at the network layer.

Thus, with Hitless Failover, transport or application layer protocols are unaware of the outage. Subsequently sessions do not incur typical delay to get reestablished at those layers, and the user experience is not impacted. This benefit applies to various session types including VPN, virtual desktop, SSH, VoIP, or Web Conference sessions.

Enterprises have some visibility of traffic statistics between the branch and their respective ISP PoPs yet are limited beyond their first mile circuits. The Cloud Direct service provides traffic details including latency, loss, jitter, and throughput. The service has visibility across the tunnel path between the Citrix SD-WAN appliance and the PoP gateway.

Administrators have the ability to view this data on per day/week/month via SD-WAN Orchestrator. They can also have a report emailed regularly.

Delivering voice-over-IP (VoIP) over the Internet is a challenge. It does not include the QoS protection provided on an Enterprise network. Cloud Direct tags VoIP packets appropriately for expedited forwarding and honors them over the Cloud Direct network. However, ISPs between the branch office and the Cloud Direct PoPs, do not honor the tags.

Jitter is one of the biggest factors in poor call quality. Jitter is often caused by Internet congestion, where ISPs cannot forward packets at the rate they are received, and thus must buffer them. Eventually they are forwarded, albeit with different inter-packet spacing, causing jitter. It is not as significant a problem for other forms of traffic. However, to deliver good VoIP call quality it is essential that buffering in transit is minimized. Cloud Direct has visibility across all available paths for jitter that is often caused by congestion. It dynamically moves the flows to better paths as needed.

Depending on the application Enterprise network traffic has different QoS requirements: 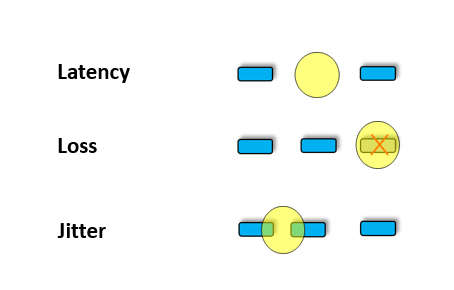 At the Cloud Direct service PoP, the OpenVPN tunnel that was originated at the branch office is de-encapsulated. Thereafter it delivered to the destination cloud provider that hosts the target SaaS site. The Cloud Direct service provides several benefits to transport traffic efficiently across this last segment: 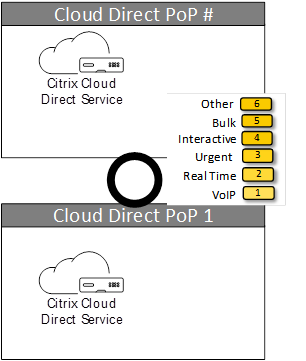 Upon reception of packets, the Citrix SD-WAN appliance hosted Cloud Direct service process automatically identifies six types of traffic. Once identified it maps them to a CoS and applies a QoS tag accordingly.

Packets originated at the branch office are transported across the Cloud Direct service tunnel. Then at the PoP, on the far end, they routed to the target SaaS site via the shortest path. If they traverse the Cloud Direct private backbone, QoS tags are honored, as packets are transferred hop-to-hop. 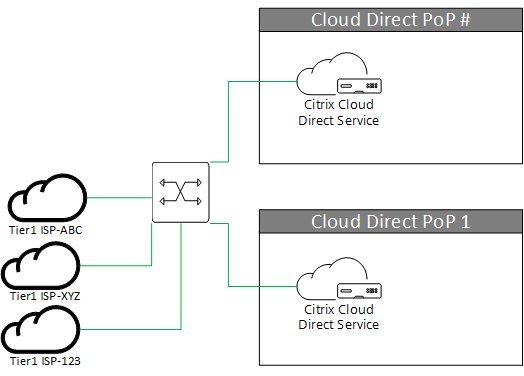 The Cloud Direct service has over 150 peering agreements with premium cloud and service providers. With the access these peers offer the service is able to provide efficient paths, reducing latency for branch users accessing SaaS sites. When PoP gateways check their route tables, they often find the shortest path to the target site a few hops away. 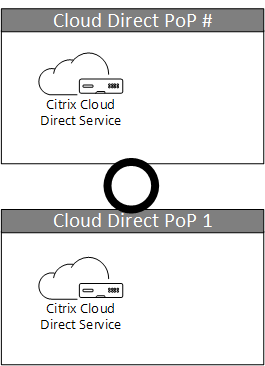 Citrix SD-WAN is a powerful networking technology that provides optimal routing across all available paths. With the addition of the Cloud Direct service it provides premium transport over the public internet including enterprise-grade reliability and performance. Let’s discuss some use cases where it provides the most benefits.

The Cloud Direct service has several benefits for access to SaaS. It provides link load-balancing for up to four customer-provided Internet circuits. It helps ensure quality with bi-directional application aware QoS. It includes resiliency with link-to-link and PoP-to-PoP same-IP failover. It provides visibility with real-time service monitoring with benefit reporting.

The Cloud Direct service has several benefits for access to UCaaS services. Sessions persist during outages in the communication path with hitless failover. The service monitors and dynamically switches internet paths when call quality degrades with VoIP Protection. It also maintains call quality with Enterprise QoS.