This article is deprecated. The article describes functionality that we no longer support.

Secure Hub VPN is used for communication between Secure Hub and mobile productivity apps. It does not filter or monitor network traffic on the device and is independent of the MDX micro-VPN mechanism.

Citrix recommends that you leave Secure Hub VPN enabled in environments where it is enabled by default.

Because iOS does not allow more than one VPN client to run on an iOS device simultaneously, however, be aware of the following situation. The Secure Hub VPN cannot be used if another VPN app, such as Cisco AnyConnect or Citrix VPN, needs to run on iOS devices to establish a device-level VPN. You can set up an iOS per-app VPN even if Secure Hub VPN is not disabled. The app using the iOS per-app VPN establishes a per-app VPN connection when the app is in the foreground.

To disable Secure Hub VPN, see the following section in this article. When Secure Hub VPN is disabled, users might experience more flips from a managed app to Secure Hub.

To disable Secure Hub VPN and set iOS devices in your deployment to use the shared keychain mechanism, do the following: 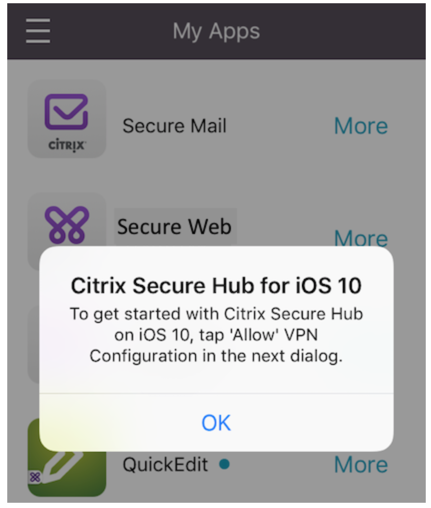 Next, users see an iOS message asking for permission to add VPN configurations. This message is shown only one time, when the VPN is first installed. It is not shown when users open Secure Hub again. 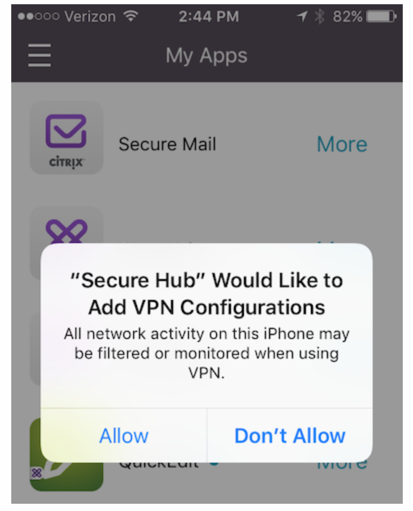 The message on this screen is not customizable. It is a standard iOS dialog box used for all VPN installations.

On the screen asking for permission to add the VPN configuration: If users select Don’t Allow, they see another message indicating that they must install the VPN to access Secure Hub.

When the Secure Hub VPN is running as designed, the text Connecting appears in the General > VPN screen of the iOS Settings app. 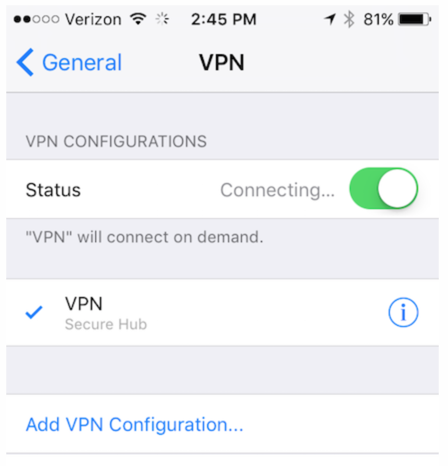 This is expected and does not mean that the MDX sharing and communication mechanisms are not functioning. There is no action required from users if they see this message.

Thank you for the feedback
iOS VPN installation
August 21, 2019
Contributed by:
C