Citrix Endpoint Management is an enterprise solution that lets you manage mobile devices, apps, and data. The basic premise of Endpoint Management mobile app management (MAM) is that it injects enterprise functionality into preexisting apps, which are then hosted on a company’s private app store, the Apple App Store, or the Google Play Store.

To add Endpoint Management enterprise functionality to mobile apps, you wrap them with the MDX Toolkit. The MDX Toolkit is an app container technology that enhances the mobile device experience and prepares apps for secure deployment with Endpoint Management by adding MDX capabilities. The MDX capabilities include policies and settings, signed security certificates, and mobile app management code.

The MDX Toolkit includes the MDX App SDK, which delivers a complete set of MDX capabilities to your mobile apps through the Citrix MDX app container technology. APIs enable you to:

The 10.2 release of MDX App SDK for iOS includes these enhancements and updates.

Support for shared vault in Android apps. The MDX App SDK now includes the Android API for the MDX shared vault feature, enabling you to share managed content between apps. For example, the shared vault enables the sharing of certificates and private keys through an enrolled app so that apps can obtain a certificate from the secure vault instead of from Secure Hub. For details, see XenMobile API for Android.

Developers, be sure to test wrapped apps that perform background processing, such as content refreshes on a locked device or background syncs.

This developers guide focuses on app wrapping for ISVs.

The MDX App SDK offers dual-mode app behavior, enabling you to deploy apps that can run with or without the MDX infrastructure. Apps that are run independently of Secure Hub are referred to as unmanaged apps. When those apps meet certain conditions, they transition to managed apps and run under the control of Secure Hub.

You use the Endpoint Management APIs to specify the type of dual-mode behavior needed when integrating an app with MDX. You can either develop two versions of app, one that is unmanaged and one that is managed, or a single app for both independent use and for inclusion in MDX. The MDX framework enforces the default behaviors associated with unmanaged and managed apps.

How an app transitions from unmanaged to managed depends on whether the app is wrapped as a General app or a Premium app:

The following diagram summarizes the differences between General and Premium apps, based on whether they are managed or unmanaged. 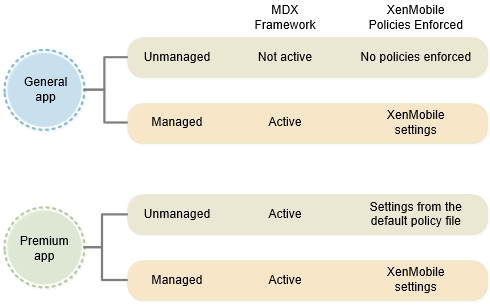 This section provides general information about app wrapping for ISVs. App wrapping performed by enterprise administrators is discussed in About the MDX Toolkit.

When you wrap ISV apps, the MDX Toolkit creates two files: an .mdx file and the app file (.ipa, .app, or .apk). The MDX Toolkit lets you embed the app store URL into the .mdx file, which you then deliver directly to your customers or upload to the Citrix Ready Marketplace, as described in the next section. You deliver the app file through app stores, by hosting it yourself, or by distributing it to your customers.

As shown in the following diagram, the MDX Toolkit combines app files (.ipa, .app, or .apk) with Citrix components and your keystore or signing certificate to produce an .mdx file and the modified app file. 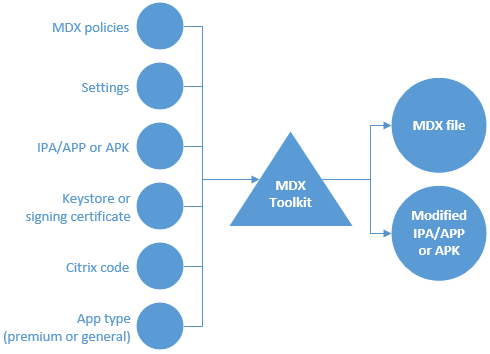 The items added by ISV app wrapping include:

About the Citrix Ready Program

Citrix evaluates and certifies ISV apps through the Citrix Ready program. The evaluation largely involves Endpoint Management integration testing. The certification ensures that the apps are compatible with the Endpoint Management infrastructure, thus giving enterprises confidence in your apps.

As part of the Citrix Ready program, you can publish your certified ISV app binaries directly in the Apple App Store or the Google Play Store. That means you don’t need to distribute binaries to enterprises, giving you more control over app updates. In addition, your apps are signed with your ISV certificate. You can also choose to distribute your certified apps directly to enterprises or to host them yourself.

The way users interact with an app that is integrated with the MDX App SDK depends on how they install and start the app.

If Secure Hub is present on device already, users have the following experience for General and Premium apps.

Thank you for the feedback
MDX developer guide
January 23, 2019
Contributed by:
C