It is often necessary to update an existing virtual disk so that the image contains the most current software and patches. Each time the virtual disk is updated, a new version of that virtual disk is created. This file is seen as a Hyper-V Virtual Hard Drive, with the extension .vhdx. This new version is used to capture the changes without updating the base virtual disk image.

The following illustrates the general promotion of a virtual disk update: 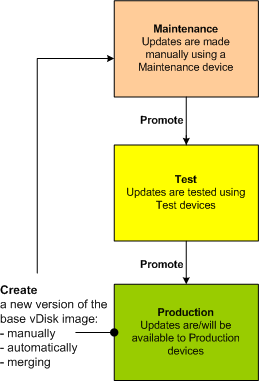 Each time a virtual disk is put into maintenance mode a new version of the VHDX differencing disk is created. The file name is numerically incremented. The following table illustrates these chain sequences:

Use the vDisk Versions dialog to create a version of the virtual disk’s base image.

Merging VHDX differencing disk files can save disk space and increase performance, depending on the merge method selected. Once a virtual disk reaches five versions, Citrix recommends merging the versions either to a new base image or to a consolidated differencing disk.

Automatically consolidate differencing disks in the Farm Properties dialog’s vDisk Version tab. Select a maximum virtual disk number, when that number is reached, a merge is automatically performed. The availability of that virtual disk depends on the mode selected on the tab, production, maintenance, or test.

An updated version of the virtual disk is not available to production devices until it is promoted to production. The update promotion stages include:

After you complete an update using the manual method, the new version can be promoted to test or production from the virtual disk Version dialog’s Promote button. If you selected production, a release date and time can be set, or accept the default, Immediate.

After you complete an update using the automated update method, the new version is promoted according to the Post Update setting. After completing the automatic update, promote the version using the vDisk Versions dialog’s Promote button.

This article describes how to change a virtual disk on multiple target devices without having to manually reconfigure them. It provides some general information about the process, then sets out a step-by-step procedure.

Never assign more than one virtual disk with the same type from the same provisioning server to the same target device. This process applies to environments using the Automatic Disk Image Update feature.

You can set a timer to update vDisks. The virtual disk are assigned to all the devices with a matching class at a specified time, for example when devices are less active.

To add a replacement virtual disk to a site automatically, place it in the store directory of the virtual disk it replaces. When the update process is done, each store for the site is scanned for vDisks that are not defined in the site. A virtual disk is automatically added to a site and assigned to a target device with a matching class:

The replacement virtual disk must include all versions since and including the last merged base, or if no merged base exists, the base. All the VHDX, AVHDX, and the PVP files for the included versions must be in the store directory.

After configuring the site to use virtual disk update management, managed vDisks are updated using the following methods:

Managed vDisks can now be automatically updated on this site. Next, virtual host connections must be configured to allow for automatic updates to be made. See Configuring Virtual Host Connections for Automated virtual disk Updates.

When you use virtual disk update management, a designated hypervisor server is selected from within a virtual pool that is then used to communicate with Citrix Provisioning. Create the designated hypervisor by running the Virtual Host Connection Wizard. If you are running a vCenter server on alternate ports, the following registry modifications must be made to connect to it from Citrix Provisioning:

Thank you for the feedback
Updating virtual disks
January 7, 2022
Contributed by:
C