XenApp and XenDesktop supports the use of Universal Windows Platform (UWP) apps with VDAs on Windows 10 and Windows Server 2016 machines. For information about UWP apps, see the following Microsoft documentation:

The term Universal Apps is used throughout this article to refer to UWP apps.

Universal Apps are supported for VDAs on Windows 10 and Windows Server 2016 machines.

VDAs must be minimum version 7.11.

The following XenApp and XenDesktop features are either not supported or limited when using Universal Apps:

During sideloading, the Universal App is installed on the machine and is available for use for other users. When any other user launches the app, the app is installed. The OS then updates its AppX database to indicate “as installed” for the user launching the app.

Application Display Names and Descriptions for Universal Apps might not have correct names. Edit and correct these properties when adding the applications to the Delivery Group.

Check the Known issues article for any additional issues.

Currently, several Universal Apps have white icons with transparency enabled, which results in the icon not being visible against the white background of the StoreFront display. To avoid this issue, you can change the background. For example, on the StoreFront machine, edit the file C:\inetpub\wwwroot\Citrix\StoreWeb\custom\style.css. At the end of the file, add .storeapp-icon {background-image: radial-gradient( circle at top right, yellow, red ); }. The graphic below illustrates the before-and-after for this example.

On Windows Server 2016, the Server Manager might also launch when a Univeral App is launched. To prevent this from occurring, you can disable Server Manager from auto-starting during logon with the HKLM\Software\Microsoft\ServerManager\DoNotOpenServerManagerAtLogon registry key. For details, see https://blogs.technet.microsoft.com/rmilne/2014/05/30/how-to-hide-server-manager-at-logon/.

Support for Universal Apps is enabled by default.

To disable the use of Universal Apps on a VDA, add the registry setting EnableUWASeamlessSupport in HKLM\Software\Citrix\VirtualDesktopAgent\FeatureToggle and set to 0.

To install one or more Universal Apps on VDAs (or a master image), use one of the following methods:

To add (publish) one or more Universal Apps in XenApp or XenDesktop: 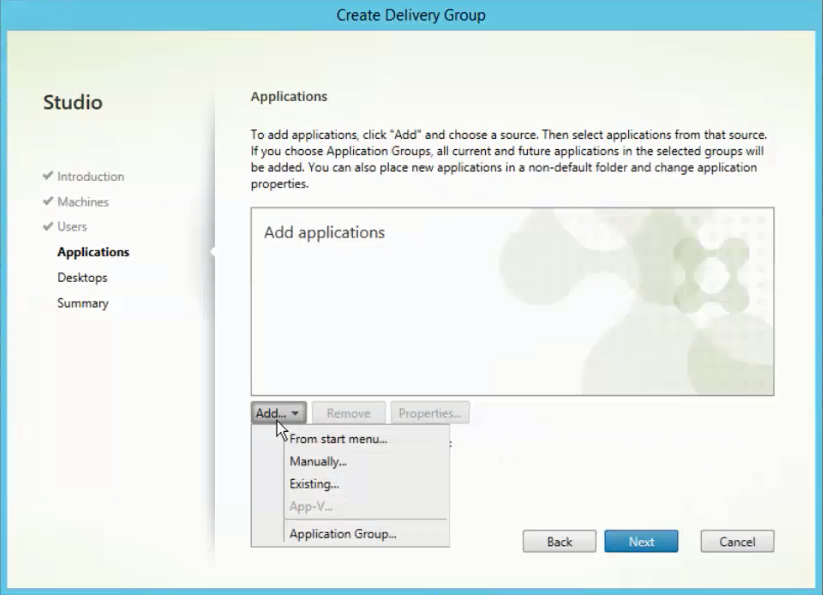 When the applications list appears, select the check boxes of the Universal Apps you want to publish. Then click Next.

When you uninstall a Universal App with a command such as Remove-AppXPackage, the item is uninstalled only for administrators. To remove the app from the machines of users who may have launched and used the app, you must run the removal command on each machine. You cannot uninstall the AppX package from all users’ machines with one command.