To ensure that the XenApp and XenDesktop Site database is always available, Citrix recommends starting with a fault-tolerant SQL Server deployment, by following high availability best practices from Microsoft. (The Databases section in the System requirements article lists the SQL Server high availability features supported in XenApp and XenDesktop.) However, network issues and interruptions may result in users not being able to connect to their applications or desktops.

Local Host Cache is the most comprehensive high availability feature in XenApp and XenDesktop. It is a more powerful alternative to the connection leasing feature that was introduced in XenApp 7.6.

Although connection leasing is supported in version 7.15 LTSR, it will be removed in the following release. 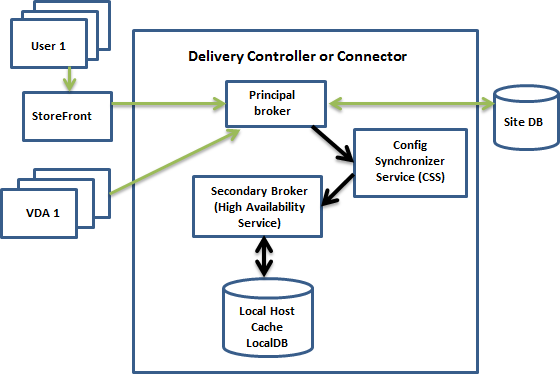 The following graphic illustrates the changes in communications paths if the principal broker loses contact with the Site database (an outage begins): 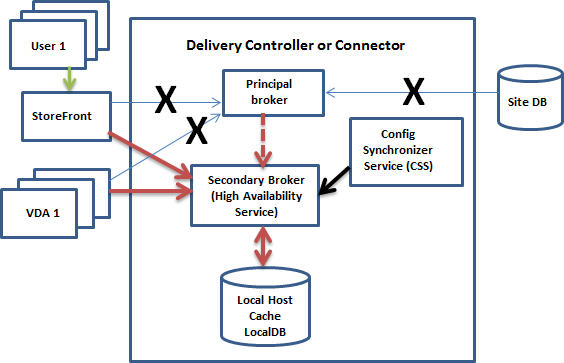 The event log provides information about synchronizations and outages. See the “Monitor” section below for details.

You can also intentionally trigger an outage; see the “Force an outage” section below for details about why and how to do this.

If you power off a Controller during normal operations and then power it on during an outage, Local Host Cache cannot be used on that Controller if it is elected as the primary broker.

The event log provides information about elections. See the “Monitor” section below.

Local Host Cache is supported for server-hosted applications and desktops, and static (assigned) desktops; it is not supported for pooled VDI desktops (created by MCS or PVS).

There is no time limit imposed for operating in outage mode. However, restore the site to normal operation as quickly as possible.

What is unavailable or changes during an outage:

By default, power-managed desktop VDAs in pooled Delivery Groups that have the ShutdownDesktopsAfterUse property enabled are placed into maintenance mode when an outage occurs. You can change this default, to allow those desktops to be used during an outage. However, you cannot rely on the power management during the outage. (Power management resumes after normal operations resume.) Also, those desktops might contain data from the previous user, because they have not been restarted.

To override the default behavior, you must enable it site-wide and for each affected Delivery Group.

For the site, run the following PowerShell cmdlet:

For each affected Delivery Group, run the following PowerShell cmdlet:

Enabling this feature in the Site and the Delivery Groups does not affect how the configured ShutdownDesktopsAfterUse property works during normal operations.

The LocalDB service can use approximately 1.2 GB of RAM (up to 1 GB for the database cache, plus 200 MB for running SQL Server Express LocalDB). The High Availability Service can use up to 1 GB of RAM if an outage lasts for an extended interval with many logons occurring (for example, 12 hours with 10K users). These memory requirements are in addition to the normal RAM requirements for the Controller, so you might need to increase the total amount of RAM capacity.

Note that if you use a SQL Server Express installation for the Site database, the server will have two sqlserver.exe processes.

A Controller’s CPU configuration, particularly the number of cores available to the SQL Server Express LocalDB, directly affects Local Host Cache performance, even more so than memory allocation. This CPU overhead is observed only during the outage period when the database is unreachable and the High Availability service is active.

As users access resources during an outage, the LocalDB grows. For example, during a logon/logoff test running at 10 logons per second, the database grew by one MB every 2-3 minutes. When normal operation resumes, the local database is recreated and the space is returned. However, the broker must have sufficient space on the drive where the LocalDB is installed to allow for the database growth during an outage. Local Host Cache also incurs additional I/O during an outage: approximately 3 MB of writes per second, with several hundred thousand reads.

During an outage, one broker handles all the connections, so in Sites (or zones) that load balance among multiple Controllers during normal operations, the elected broker might need to handle many more requests than normal during an outage. Therefore, CPU demands will be higher. Every broker in the Site (zone) must be able to handle the additional load imposed by LocalDB and all of the affected VDAs, because the broker elected during an outage could change.

During an outage, load management within the Site may be affected. Load evaluators (and especially, session count rules) may be exceeded.

During the time it takes all VDAs to re-register with a broker, that broker might not have complete information about current sessions. So, a user connection request during that interval could result in a new session being launched, even though reconnection to an existing session was possible. This interval (while the “new” broker acquires session information from all VDAs during re-registration) is unavoidable. Note that sessions that are connected when an outage starts are not impacted during the transition interval, but new sessions and session reconnections could be.

This interval occurs whenever VDAs must re-register with a different broker:

The time it takes to synchronize between brokers increases with the number of objects (such as VDAs, applications, groups). For example, synchronizing 5000 VDAs might take ten minutes or more to complete. See the “Monitor” section below for information about synchronization entries in the event log.

The Microsoft SQL Server Express LocalDB that Local Host Cache uses is installed automatically when you install a Controller or upgrade a Controller from a version earlier than 7.9. There is no administrator maintenance needed for the LocalDB. Only the secondary broker communicates with this database; you cannot use PowerShell cmdlets to change anything about this database. The LocalDB cannot be shared across Controllers.

To prevent its installation, install or upgrade the Controller using the XenDesktopServerSetup.exe command, and include the /exclude “Local Host Cache Storage (LocalDB)” option. However, keep in mind that the Local Host Cache feature will not work without the database, and you cannot use a different database with the secondary broker.

Installation of this LocalDB database has no effect on whether or not you install SQL Server Express for use as the site database.

Default settings after XenApp or XenDesktop installation and upgrade

To determine whether Local Host Cache is enabled, enter:

You might want to deliberately force a database outage.

To force an outage, edit the registry of each server containing a Delivery Controller.

During normal operations, the following events can occur when the CSS copies and exports the broker configuration and imports it to the LocalDB using the High Availability Service (secondary broker).

Several troubleshooting tools are available when an synchronization import to the LocalDB fails and a 505 event is posted.

CDF tracing: Contains options for the ConfigSyncServer and BrokerLHC modules. Those options, along with other broker modules, will likely identify the problem.

The HTML report is posted at C:\\Windows\\ServiceProfiles\\NetworkService\\AppData\\Local\\Temp\\CitrixBrokerConfigSyncReport.html.

Thank you for the feedback
Local Host Cache
February 11, 2021
Contributed by:
C