The following graphic illustrates the environment configuration in this case study. 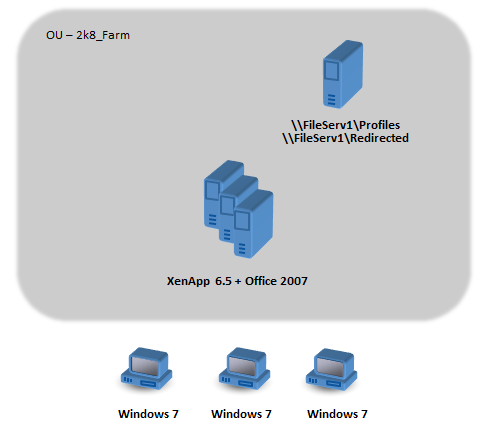 Windows 7 machines are configured to use Office 2007 published on Citrix XenApp 6.5.

The domain includes Windows 2008 domain controllers running Active Directory at Windows 2008 level. All of the machines belong to an OU called 2k8_Farm and the Profile management 5.0 .adm file is added to a GPO called 2k8_Farm_PO. The following policies are configured.

A machine logon script, which sets the system environment variable %ProfVer%, runs on all of the machines in the OU.

So, for example, user john.smith has his profile at \\FileServ1\Profiles\john.smith\Win7 for the Windows 7 desktop and at \\FileServ1\Profiles\john.smith\Win2008 for the Citrix Virtual Apps servers. Separate profiles are maintained for desktops and servers. The administrator is aware that issues exist when profiles roam between workstation and multi-session operating systems and is being cautious.