You can upgrade certain deployments to newer versions without having to first set up new machines or Sites. That process is called an in-place upgrade. See Upgrade for a list of the versions you can upgrade.

To start an upgrade, you run the installer from the new version to upgrade previously installed core components (Delivery Controller, Citrix Studio, Citrix Director, Citrix License Server) and VDAs. Then you upgrade the databases and the Site.

Be sure to review all the information in this article before beginning the upgrade.

(If you are upgrading to 7.16 or a later release, see the guidance in Upgrade a deployment.)

The following diagram summarizes the upgrade sequence. Details are provided in Upgrade procedure below. For example, if you have more than one core component installed on a server, running the installer on that machine will upgrade all components that have new versions. You might want to upgrade the VDA used in a master image, and then update the image. Then, update the catalog that uses that image and the Delivery Group that uses that catalog. Details also cover how to upgrade the Site databases and the Site automatically or manually. 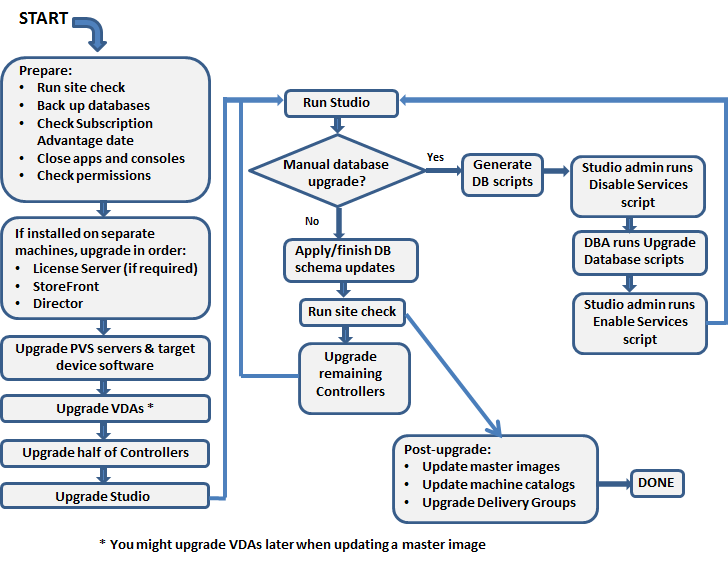 Which product component versions can be upgraded

Using the product installer, you can upgrade:

Note: To upgrade from XenDesktop 5.6, first upgrade to 7.6 LTSR (with the latest CU), and then upgrade to this release.

Using the guidance in the feature/product documentation, upgrade the following if needed:

The following limitations apply to upgrades:

You do not have to upgrade VDAs, but Citrix recommends upgrading all VDAs to enable you to use all available features.

Before beginning an upgrade:

The Site database and the Site can be upgraded automatically or manually. For an automatic database upgrade, the Studio user’s permissions must include the ability to update the SQL Server database schema (for example, the db_securityadmin or db_owner database role). For details, see the Databases article. If the Studio user does not have those permissions, initiating a manual database upgrade will generate scripts. The Studio user runs some of the scripts from Studio; the database administrator runs other scripts using a tool such as SQL Server Management Studio.

Within each Site, Citrix recommends upgrading all components. Although you can use earlier versions of some components, all the features in the latest version might not be available. For example, although you can use current VDAs in deployments containing earlier Controller versions, new features in the current release may not be available. VDA registration issues can also occur when using non-current versions.

You cannot upgrade VDAs installed on machines running Windows XP or Windows Vista to a 7.x version. You must use VDA 5.6 FP1 with certain hotfixes; see CTX140941 for instructions. Although earlier-version VDAs will run in a 7.x Site, they cannot use many of its features, including:

To upgrade VDAs installed on machines running Windows 8.x or Window 7 to Windows 10, Citrix recommends reimaging Windows 7 and Windows 8.x machines to Windows 10 and then installing the supported VDA for Windows 10. If reimaging is not an option, uninstall the VDA before upgrading the operating system; otherwise, the VDA will be in an unsupported state.

When you upgrade the product to a later version, Citrix recommends you upgrade all the core components and VDAs so you can access all the new and enhanced features in your edition.

If a machine catalog is created with the default recommended VDA version setting, and any of the machines in the catalog has an earlier VDA version installed, those machines will not be able to register with the Controller and will not work.

Citrix recommends that all Delivery Controllers in a Site have the same OS. The following upgrade sequence minimizes the interval when different Controllers have different OSs.

For information about adding and removing Controllers, see Delivery Controllers.

To run the product installer graphical interface, log on to the machine and then insert the media or mount the ISO drive for the new release. Double-click AutoSelect. To use the command-line interface, see Install using the command line.

Upgrade the databases and the Site

After upgrading the core components and VDAs, use the newly upgraded Studio to initiate an automatic or manual database and Site upgrade.

Remember: Check the Preparation section above for permission requirements.

Citrix strongly recommends that you back up the database before upgrading. See CTX135207. During a database upgrade, product services are disabled. During that time, Controllers cannot broker new connections for the site, so plan carefully.

After the database upgrade completes and product services are enabled, Studio tests the environment and configuration, and then generates an HTML report. If problems are identified, you can restore the database backup. After resolving issues, you can upgrade the database again.

Upgrade the database and site automatically:

Launch the newly upgraded Studio. After you choose to start the site upgrade automatically and confirm that you are ready, the database and site upgrade proceeds.

Upgrade the database and site manually:

Thank you for the feedback
Upgrade a deployment
July 21, 2021
Contributed by:
C