Once it has been determined that it is indeed necessary for users to access applications from various Citrix Virtual Apps servers, the impact on profiles must be ascertained.

The following diagram illustrates an example where application settings can be lost when multiple sessions exist. 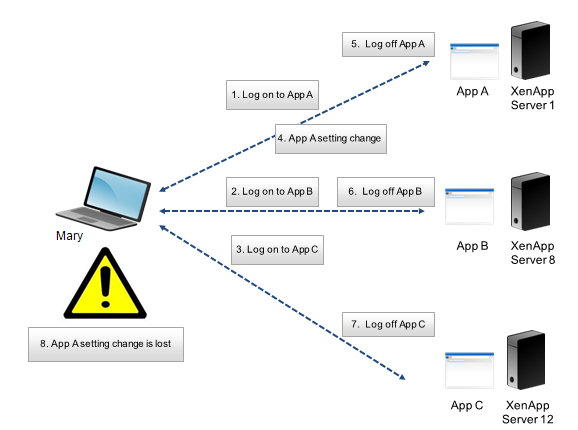 For example, Mary wants to access App A, App B, and App C and she is routed to Server 1, Server 8, and Server 12 respectively. Upon logon to each application, Mary’s Terminal Services roaming profile is loaded onto each server and folders are redirected for each session. When Mary is logged on to App A on Server1, Mary changes Setting1 and logs off that session. Mary then completes work in the other two applications and logs off.

At logoff, the change that Mary made within the session on Server 1 is overwritten because the settings within the last closed session are retained, not the interim change. When Mary logs on to App A the next day, she is frustrated because the change she made is not visible.

Thank you for the feedback
Profile Management use cases
September 28, 2020
Contributed by:
C