Known issues in this release

New in this cumulative update

How do I deploy CU4 from scratch?

You can set up a brand-new XenApp and XenDesktop environment based on CU4 - using the CU4 metainstaller. Before you do that, we recommend that you familiarize yourself with the product:

Peruse the XenApp and XenDesktop 7.15 LTSR (initial release) section and pay close attention to the Technical Overview, Install and Configure, and Securitysections before you start planning your deployment. Ensure your setup meets the system requirements for all components.

What do I update?

The following components - at the versions given below - are compatible with LTSR environments. They are not eligible for the LTSR benefits (extended lifecycle and fix-only cumulative updates). Citrix might ask you to upgrade to a newer version of these components within your 7.15 LTSR environments.

Redirects the contents of a web browser to a client device, and creates a corresponding browser embedded within Citrix Workspace app. This feature offloads network usage, page processing, and graphics rendering to the endpoint. Doing so improves the user experience when browsing demanding webpages, especially webpages that incorporate HTML5 or WebRTC. Only the viewport (the user’s visible area of a webpage) is redirected to the endpoint. Browser content redirection doesn’t redirect the user interface (the address bar, toolbar, and so forth) of the browser on the VDA. For more information see Browser content redirection.

These requirements are specifically for the BCR.msi with XenApp and XenDesktop 7.15 LTSR CU4. Disregard any browser content redirection system requirements listed in any other versions of XenApp, XenDesktop, and Citrix Virtual Apps and Desktops.

You can control policies using the HKEY_LOCAL_MACHINE registries on the VDA or the HDX Browser Content Redirection Citrix administration template for the Group Policy Management Console.

You can download the template from the citrix.com download page under Citrix Virtual Apps and Desktops (XenApp & XenDesktop) > XenApp 7.15 LTSR / XenDesktop 7.15 LTSR > Components. Citrix Studio does not contain these policies. 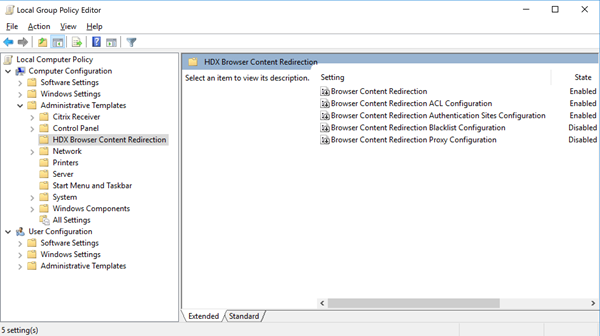 For ease of maintenance, and to ensure optimal performance, Citrix recommends that you upgrade to the latest version of Citrix Workspace app any time it becomes available. The latest versions are available for download at https://www.citrix.com/downloads/workspace-app/.

The following versions and all later versions of Citrix Workspace app are compatible with 7.15 LTSR CU4:

The following versions and all later versions of Citrix Receiver are compatible with 7.15 LTSR CU4:

The following features, components, and platforms are not eligible for 7.15 LTSR lifecycle milestones and benefits. Specifically, cumulative updates and extended lifecycle benefits are excluded. Updates to excluded features and components are available through regular current releases.

When you use the full-product installer to deploy or upgrade XenApp or XenDesktop components, anonymous information about the installation process is gathered and stored on the machine where you are installing/upgrading the component. This data is used to help Citrix improve its customers’ installation experiences. For more information, see Install and upgrade analytics.

The XenApp 6.5 migration process helps you more efficiently and quickly transition from a XenApp 6.5 farm to a Site running XenApp 7.15 LTSR CU4. This is helpful in deployments that contain large numbers of applications and Citrix group policies, lowering the risk of inadvertently introducing errors when manually moving applications and Citrix group policies to the new XenApp Site.

After you install the XenApp 7.15 LTSR CU4 core components and create a Site, the migration process follows this sequence:

Reconfigure the new Site as needed, and then test it.

Thank you for the feedback
Cumulative Update 4 (CU4)
February 8, 2021
Contributed by:
C