USB devices are shared between Citrix Workspace app and the Linux VDA desktop. When a USB device is redirected to the desktop, you can use the USB device as if it were locally connected.

This portion of the USB redirection feature develops a general USB device sharing system over an IP network. It consists of a Linux kernel driver and some user mode libraries that allow you to communicate with the kernel driver to get all the USB data. In the Linux VDA implementation, Citrix reuses the kernel driver of VHCI. However, all USB data transfers between the Linux VDA and Citrix Workspace app are encapsulated in the Citrix ICA protocol package.

The USB service acts as a Citrix module that manages all the virtualization and data transfers on the USB device.

The Linux VDA supports a list of USB devices that are successfully redirected to and from the client.

A Citrix policy controls whether USB device redirection is enabled or disabled. The type of device can also be specified using a Delivery Controller policy. When configuring USB redirection for the Linux VDA, configure the following policy and rules: 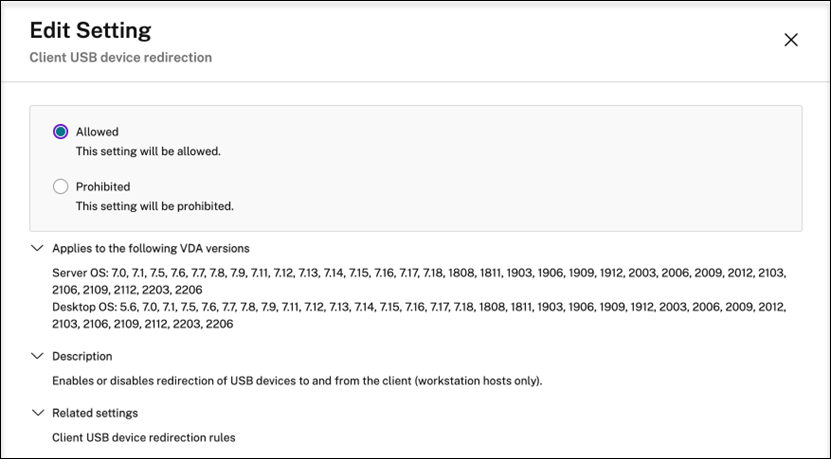 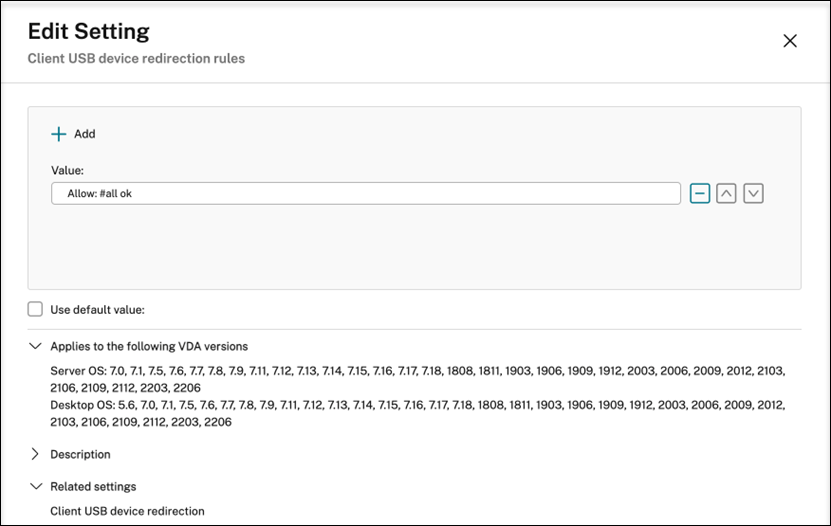 USB redirection depends on the VHCI kernel modules (usb-vhci-hcd.ko and usb-vhci-iocif.ko). These modules are part of the Linux VDA distribution (as part of the RPM package). They’re compiled based on the official Linux distribution kernels and are noted in the following table:

If the kernel of your machine isn’t compatible with the driver built for the Linux VDA, the USB service might fail to start. In this case, you can use the USB redirection feature only if you build your own VHCI kernel modules.

Use the information in this section to troubleshoot various issues that you might come across when using the Linux VDA.

If you stop redirecting a USB disk immediately using the toolbar of Citrix Workspace app, the files you modified or created on the disk can be lost. This issue occurs because when you write data to a file system, the system mounts the memory cache in the file system. The data isn’t written to the disk itself. If you stop redirecting using the toolbar of Citrix Workspace app, there’s no time remaining for the data being flushed to the disk, which results in lost data. To resolve this issue, use the sync command in a terminal to flush data to the disk before stopping USB redirection.

Sometimes, you possibly can’t see devices listed in the toolbar of Citrix Workspace app, which indicates that no USB redirection is taking place. If you come across the issue, verify the following:

A USB device is redirected successfully, but I can’t use it in my session

Typically, only supported USB devices can be redirected. Other devices might be redirected to an active Linux VDA session too. For every redirected device, a node owned by the user is created in the system /dev path. However, it’s the drivers and the configuration that determine whether the user can use the device successfully. If you find a device owned (plugged in) but inaccessible, add the device to an unrestricted policy.

For USB drives, the Linux VDA configures and mounts the disk. The user (and only the owner who installed it) can access the disk without any additional configuration. This might not be the case for devices that aren’t in the supported device list.

Thank you for the feedback
USB redirection
June 14, 2022
Contributed by:
B