You can architect and configure XenMobile deployments that include multiple sites for disaster recovery using an active-passive failover strategy.

The recommended disaster recovery strategy discuss in this article consists of:

To use this architecture, you must have a process in place for asynchronous backups of the databases and some way of ensuring high availability for the SQL infrastructure.

Follow these steps any time you update XenMobile with patches and releases, in order to keep the code of the primary and disaster recovery servers uniform.

The following diagram shows the high-level architecture for a disaster recovery deployment of XenMobile. 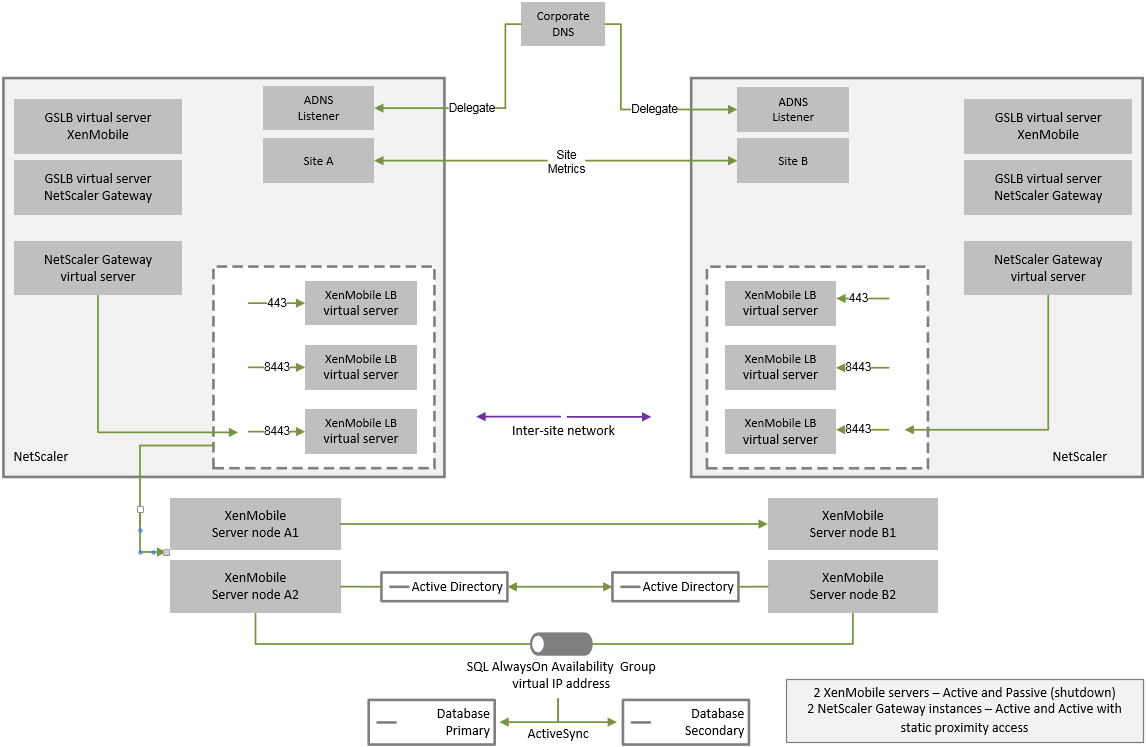 A key element of this architecture is the use of Global Server Load Balancing (GSLB) to direct traffic to the correct data center.

By default, the Citrix ADC for XenMobile wizard configures Citrix Gateway in a way that does not enable the use of GSLB for disaster recovery. Therefore, you must take additional steps.

GSLB is at its core a form of DNS. Participating Citrix ADC appliances act as authoritative DNS servers and resolve DNS records to the correct IP address (typically the VIP that is supposed to receive traffic). The Citrix ADC appliance checks the system health before responding to a DNS query directing traffic to that system.

When a record is resolved, GSLB’s role in resolving the traffic is complete. The client communicates directly with the target virtual IP (VIP) address. DNS client behavior plays an important part on controlling how and when a record expires. This is largely outside the boundaries of the Citrix ADC system. As such, GSLB is subject to the same limitations as DNS name resolution. Clients cache responses; thus, load balancing in this way isn’t as real-time as is traditional load balancing.

The GSLB configuration on Citrix ADC, including sites, services, and monitors, exist in order to provide the correct DNS name resolution.

Challenges with Domain Delegation When Using GSLB with XenMobile

To address the challenges presented by the default configuration created by the Citrix ADC for XenMobile wizard, you can create a CNAME record for the XenMobile server FQDN in the parent domain (company.com) and point a record in the delegated subzone (gslb.company.com) for which Citrix ADC is authoritative. Doing so allows for the creation of the static DNS A record for the MAM load balancing VIP address required to resolve traffic.

Thank you for the feedback
Disaster Recovery
March 25, 2020
Contributed by:
C