App protection requires that you install an add-on license on your License Server. A Citrix Virtual Desktops license must also be present. For information on Licensing, see the Configure section in the Citrix Virtual Apps and Desktops documentation.

The app protection feature supports apps and desktop sessions and is enabled by default. However, you must configure the feature in the AuthManConfig.xml file to enable it for authentication manager and Self-Service plug-in interfaces.

Starting with this release, you can launch protected resources from Citrix Workspace app while Mozilla Firefox is running.

Previously, the default value of the VdcamVersion4Support attribute in the module.ini file was set to True. With this release, the default is set to False. As a result, only the default audio device with the name Citrix HDX Audio appears in the session. This enhancement aims to minimize the audio issues that occur when the attribute is set to True.

To enable this feature, do the following:

This feature is not supported on the armhf platform.

The battery status of the device now appears in the notification area of a Citrix Desktop session.

The battery status indicator does not appear for server VDAs.

This feature is in public technical preview for Citrix Workspace app.

Service continuity removes or minimizes the dependency on the availability of components that are involved in the connection process. Users can launch their virtual apps and desktops regardless of the health status of the cloud services.

For more information, see the Service continuity section in the Citrix Workspace documentation.

Previously, the authentication manager and the Self-Service plug-in dialogs were not protected even when app protection was installed and enabled.

Starting with this release, Citrix Workspace app introduces an option to let you configure the anti-keylogging and anti-screen-capturing functionalities separately for both the authentication manager and Self-Service plug-in interfaces.

Previously, the settings menu was available from the Preferences option in the Desktop Viewer.

Starting with this release, the settings menu appears in-line with the Self-Service plug-in. The menu options are now improved to align with the look and feel of the native Citrix Workspace. This results in a seamless and a better user experience. 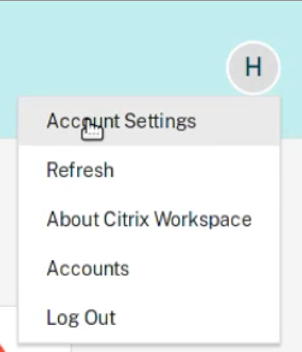 This enhancement is available by default in Citrix Workspace app Version 2106 in cloud deployments.

To switch to the native and old style appearance, do the following:

Navigate to $ICAROOT/config/AuthManConfig.xml and set the value of WebUISettings to false.

You can now configure the preferred network interface for media traffic.

Navigate to \HKEY_CURRENT_USER\SOFTWARE\Citrix\HDXMediaStream and create a key by the name of NetworkPreference (REG_DWORD).

Select one of the following values as required:

App protection is now supported on the RPM version of Citrix Workspace app.

In earlier releases, when HDXoverUDP is set to Preferred, data transport over EDT is used as primary with fallback to TCP.

By default, after fallback to TCP, adaptive transport continues to seek EDT every five minutes.

With this release, the echo cancellation feature is disabled by default. We recommend that you not use your built-in speakers and microphone for calls. Use headphones instead.

This feature is in Technical Preview. Citrix recommends using this feature only in non-production environments. To sign up, use the following Podio form: Sign up: Service continuity Tech Preview for Citrix Workspace.

Service continuity removes or minimizes the dependency on the availability of components that are involved in the connection process. Users can launch their virtual apps and desktops regardless of the health status of the cloud services.

With this release, you can save the selection for multi-monitor screen layout. The layout is how a desktop session is displayed. Pinning helps to relaunch a session with the selected layout, resulting in an optimized user experience.

Only after adding the key above, you can see the Screen Layout option in the App indicator.

This feature is not available on the web launch of Citrix Workspace app.

Increase in the number of supported virtual channels

In earlier versions of the client, sessions supported up to 32 virtual channels.

With this release, you can use up to 64 virtual channels in a session.

The VP9 video codec is now disabled by default.

With this release, access to mapped drives comes with an additional security feature.

You can now select the access level for the mapped drive for every store in a session.

To stop the access level dialog from appearing every time, select the Do not ask me again option. The setting is applied on that particular store.

Otherwise, you can set the access levels every time a session is launched.

App protection is now supported on the Debian version of Citrix Workspace app.

For silent installation of the app protection component, run the following command from the terminal before installing Citrix Workspace app:

Previously, your setting for file access through CDM was applied on all configured stores.

The file access setting isn’t’ persistent across sessions when using workspace for web. It defaults to the Ask me each time option.

App protection is an add-on feature that provides enhanced security when you use Citrix Virtual Apps and Desktops. The feature restricts the ability of clients to be compromised by keylogging and screen capturing malware. App protection prevents exfiltration of confidential information such as user credentials and sensitive information displayed on the screen. The feature prevents users and attackers from taking screenshots and from using keyloggers to glean and exploit sensitive information.

We now present the authentication dialog inside Citrix Workspace app and show store details on the logon screen for a better user experience. We encrypt and store authentication tokens so that you don’t need to reenter credentials when your system or session restarts.

You must install the libsecret library.

This feature is disabled by default.

Starting with this release, the default value of the VdcamVersion4Support attribute in the module.ini file is set to True.

Previously, only the default audio device was mapped in a session even when many devices were available on the machine. The mapped device commonly appeared as Citrix HDX Audio.

With this release, Citrix Workspace app for Linux displays all local audio devices that are available in a session. Instead of Citrix HDX Audio, they now appear with their respective device names. You can switch to any of the available devices dynamically in a session. Unlike in earlier releases, now you don’t need to select the default audio device before launching the session. Sessions update dynamically when you plug in or remove audio devices.

Previously, the debug.ini and module.ini files were used to configure logging.

As of Version 2009, you can configure logging using one of the following methods:

Also as of Version 2009, the debug.ini configuration file is removed from the Citrix Workspace app installer.

Logging captures the deployment details, configuration changes, and administrative activities of Citrix Workspace app to a logging database. A third-party developer can use the logging SDK, which is bundled as part of the Citrix Workspace app Platform Optimization SDK.

This logging mechanism is applicable only on Retail build.

Microsoft Teams optimization is supported only on x64 Linux distributions.

For information on how to enable logging, follow the steps mentioned under Logging for Microsoft Teams.

Citrix Workspace app is instrumented to transmit data to Citrix Analytics Service from ICA sessions that you launch from a browser.

For more information on how Citrix Analytics uses this information, see Self-Service for Performance and Self-service search for Virtual Apps and Desktops.

Starting with this release, the minimum and maximum TLS version supported is 1.2. To configure a different value for MinimumTLS, see TLS.

CryptoKit Version 14.2 is integrated with the OpenSSL 1.1.1d version.

Citrix Workspace app for Linux is now available in the Italian language.

Microsoft Teams audio optimization is supported only on the x64 Linux distributions.

Version 1910 introduced the transparent user interface (TUI) feature, including the VDTUI flag. The feature helps the client system to receive the TUI packets sent by the server, and the client can access the UI-related components. However, with the flag set to Off, the “Starting <Application>” dialog rendered on top of other application windows, covering the login prompt.

The BCR feature redirects contents of a web browser to a client device. The feature creates a corresponding browser that embeds within the Citrix Workspace app.

Previously, BCR used a WebkitGTK+ based overlay to render the content. Starting with this release, BCR uses a CEF-based overlay for better user experience. It helps offload network usage, page processing, and graphics rendering to the endpoint.

For information about BCR, see Browser content redirection in the Citrix Virtual Apps and Desktops documentation.

Citrix Workspace app for Linux is now available in the Brazilian Portuguese language.

You can observe performance improvement when you:

Previously, Citrix Workspace app for Linux did not support the TUI VC feature. As a result, the client system could not handle UI component data from the server efficiently. So, when attempted to launch an app, the “Starting <Application>” dialog rendered on top of other applications.

Now, Citrix Workspace app for Linux supports the TUI VC feature. This feature helps the client to receive the TUI packets sent by the server, and the client can access the UI-related components. This functionality helps you to control the display of the default overlay screen. You can toggle the VDTUI flag in the module.ini file: VDTUI - On/Off

Thank you for the feedback
About this release
August 25, 2021
Contributed by:
C