For deployments with no on-premises StoreFront, use the service continuity Citrix workspace platform feature to allow users to connect to resources during outages. For more information, see Service continuity. 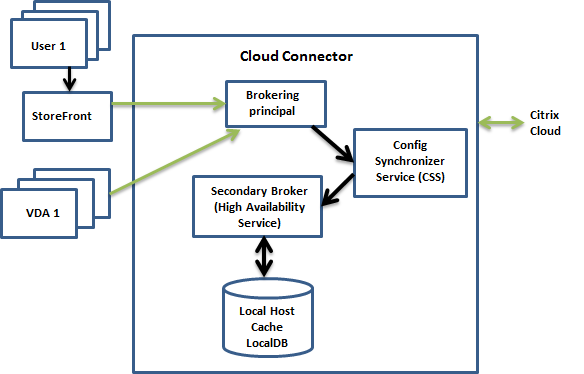 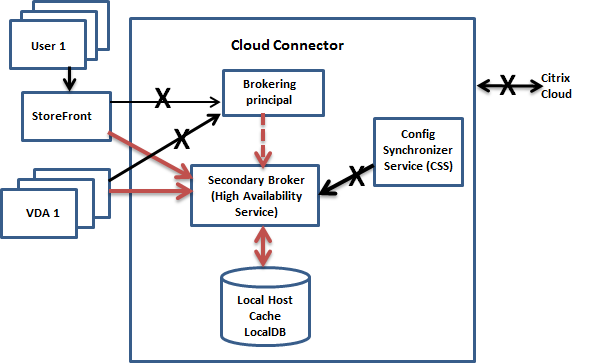 The event log indicates when synchronizations and outages occur.

During an outage, if a Cloud Connector is restarted:

You can ensure the availability of resources (apps and desktops) during an outage in two ways:

Local Host Cache works only with customer-deployed StoreFront. It does not support workspace.

In Citrix DaaS deployment, Local Host Cache is always enabled. You don’t have to do anything else to configure or manage it.

View how to verify that Local Host Cache is configured correctly.

Event logs indicate when synchronizations and outages occur. In event viewer logs, outage mode is referred to as HA mode.

To force an outage, edit the registry of each Cloud Connector server. In HKLM\Software\Citrix\DesktopServer\LHC, create and set OutageModeForced as REG_DWORD to 1. This setting instructs the Local Host Cache broker to enter outage mode, regardless of the state of the connection to Citrix Cloud. Setting the value to 0 takes the Local Host Cache broker out of outage mode.

CDF tracing: Contains options for the ConfigSyncServer and BrokerLHC modules. Those options, along with other broker modules, can identify the problem.

The HTML report is posted at: C:\Windows\ServiceProfiles\NetworkService\AppData\Local\Temp\CitrixBrokerConfigSyncReport.html

See Scale and size considerations for Local Host Cache for information about: