This article describes how you can manage cloud service license assignments and monitor active usage using the Licensing console in Citrix Cloud.

If you purchased Citrix Azure Consumption Fund to use with your service deployment, see Monitor Citrix Managed Azure resource consumption for Citrix DaaS for more information.

Citrix Cloud assigns a license when a unique user or unique device launches an app or desktop for the first time. 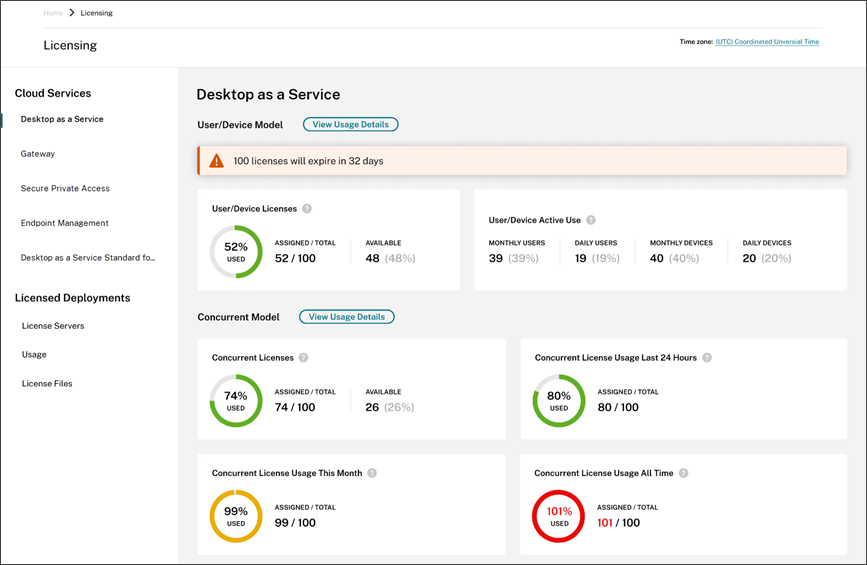 The Licensing summary provides an at-a-glance view of the following information:

Calculating assigned licenses and active use

Example of calculating active use

For a detailed view of your licenses, click View Usage Details at the far right of summary. You can then see a breakdown of usage trends and individual users and devices that are consuming cloud service licenses.

The Usage Trends section displays this breakdown as a graph.

On the License Assignment graph, pointing to a bar for a specific month or day shows you the following information:

On the Active Use graph, you can view a graph of active users and devices over the previous calendar month and calendar year, respectively. Pointing to a specific point on the graph reveals the number of active users or devices and the usage percentage.

You can also filter the list to show only licenses that are eligible for release. See To release assigned licenses in this article. 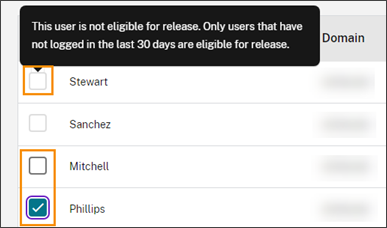 If you purchased Citrix Azure Consumption Fund, release eligibility for assigned licenses might be different depending on the plan you purchased. For more information, see Monitor Citrix Managed Azure resource consumption for Citrix DaaS.

After a license is released, the user can acquire another license by logging in and using the cloud service.

The list that appears in the License Activity section displays up to 100 assigned licenses at a time. If you have more than 100 licenses, use the page controls to move through the list.

To locate eligible licenses quickly, select Show only releasable licenses, next to the Release Licenses button. This action hides assigned licenses that aren’t yet eligible for release. 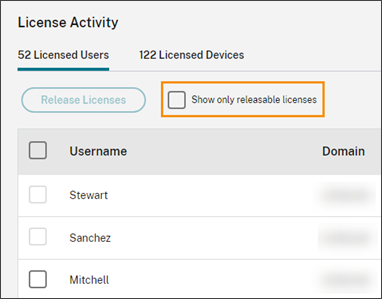 Select the dark gray checkbox next to each license to select it for release. When you select a license from the list, the Release Licenses button becomes active.

If you have more than 100 eligible licenses:

Thank you for the feedback
Monitor licenses and active usage for Citrix DaaS (User/Device)
May 2, 2022
Contributed by:
J C