Citrix DaaS (formerly Citrix Virtual Apps and Desktops service) deployments that span widely dispersed locations connected by a WAN can face challenges from network latency and reliability. Using zones can help users in remote regions connect to resources without necessarily forcing their connections to traverse large segments of the WAN. In Citrix DaaS environment, each resource location is considered a zone.

Zones can be helpful in deployments of all sizes. You can use zones to keep applications and desktops closer to users, which improves performance. Zones can be used for disaster recovery, geographically distant data centers, branch offices, a cloud, or an availability zone in a cloud.

Zones in Citrix DaaS environment are similar, but not identical to zones in an on-premises Citrix Virtual Apps and Desktops deployment.

What’s in a zone

A zone is equivalent to a resource location. When you create a resource location and install a Cloud Connector, a zone is automatically created for you. Each zone can have a different set of resources, based on your unique needs and environment. 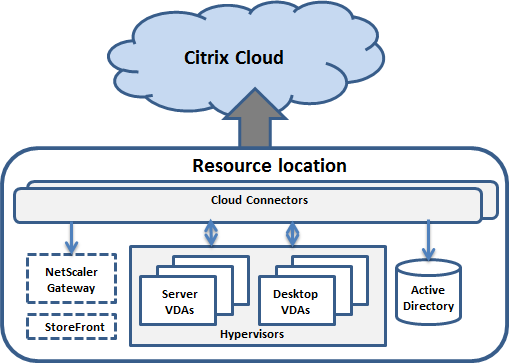 Each zone must always have at least one Cloud Connector, and preferably two or more, for redundancy.

You can place machine catalogs, hypervisors, host connections, users, and applications in a zone. A zone can also contain Citrix Gateway and StoreFront servers. To use the Local Host Cache feature, a zone must have a StoreFront server.

Placing items in a zone affects how Citrix DaaS interacts with them and with other objects related to them.

If the connection between a zone and Citrix Cloud fails, the Local Host Cache feature enables a Cloud Connector in the zone to continue brokering connections to VDAs in that zone. (The zone must have StoreFront installed.) For example, this is effective in an office where workers use the local StoreFront site to access their local resources, even if the WAN link connecting their office to the corporate network fails. For more information, see Local Host Cache.

VDAs must be minimum version 7.7 to use these zone registration features: 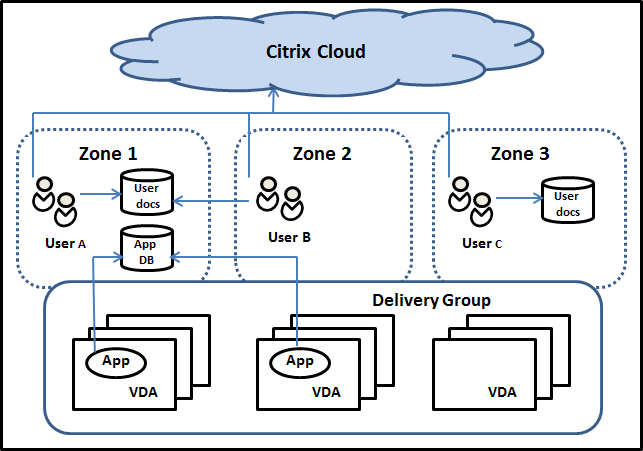 In this example, VDAs are spread among three zones, but they are all in the same delivery group. Therefore, Citrix DaaS broker might have a choice which VDA to use for a user launch request. This example illustrates that users can be running their Citrix Workspace app endpoints at different locations. User A is using a device with Citrix Workspace app in zone 1. User B is using a device in zone 2. Similarly, a user’s documents can be stored in different locations. Users A and B use a share located in zone 1. User C uses a share in zone 3. Also, one of the published applications uses a database located in zone 1.

You associate a user or application with a zone by configuring a home zone for the user or application. The broker then uses those associations to help select the zone where a session will be launched, if resources are available. You:

When you configure (or remove) a home zone for a user or an application, you can also further restrict how zone preference is (or is not) used.

If the user launching an application or desktop already has a session that is suitable for the resource being launched (for example, can use session sharing for an application, or a session already running the resource being launched), but that session is on a VDA in a zone other than the preferred zone for the user/application, then the system might create a new session. This action satisfies launching in the correct zone (if it has available capacity), ahead of reconnecting to a session in a less-preferred zone for that user’s session requirements.

When you create a resource location in Citrix Cloud and then add a Cloud Connector to that resource location, Citrix DaaS automatically creates and names a zone. You can optionally add a description later.

After you create more than one resource location (and the zones are created automatically), you can move resources from one zone to another.

Add or change a zone description

Although you cannot change a zone’s name, you can add or change its description.

Move resources from one zone to another zone

A confirmation message lists the items you selected and asks if you are sure that you want to move all of them.

Remember: When a machine catalog uses a host connection to a hypervisor or cloud service, ensure that the catalog and the connection are in the same zone. Otherwise, performance can be affected. If you move one, move the other, too.

If you have more than one zone, you can specify a zone when you add a host connection or create a catalog. Zones are listed alphabetically in selection lists. By default, the first alphabetical name is selected.