As of Citrix Virtual Apps and Desktops 7 1903, Framehawk is no longer supported. Instead, use Thinwire with adaptive transport enabled.

Framehawk is a specialized display remoting technology for mobile workers on broadband wireless connections (Wi-Fi and 4G/LTE cellular networks) subject to high packet loss. Framehawk overcomes the challenges of spectral interference and multipath propagation. Framehawk delivers a fluid and interactive user experience to users of virtual apps and desktops on Windows and iOS mobile devices such as laptops and tablets. To maximize server scalability and minimize network bandwidth consumption, we recommend using Framehawk only for the specific use case described above. We recommend adaptive transport, which incorporates many Framehawk concepts to maximize data throughput, for all other use cases.

You can use Citrix policy templates to implement Framehawk for a set of users and access scenarios in a way that is appropriate for your organization. Framehawk targets single-screen mobile use cases such as laptops and tablets. Use Framehawk where the business value of real time interactive performance justifies the extra cost in server resources and the requirement for a broadband connection.

Think of Framehawk as a software implementation of the human eye, looking at what’s in the frame buffer and discerning the different types of content on the screen. What’s important to the user? When areas of the screen are changing rapidly, like video or moving graphics, it doesn’t matter to the human eye if some pixels are lost. Those areas are quickly overwritten with new data.

But when it comes to static areas of the screen, the human eye is fussy. For example, the icons in the notification area or a toolbar, or text after scrolling to where the user wants to start reading. A user expects those areas to be pixel perfect. Unlike protocols aiming to be technically accurate from a ones and zeros perspective, Framehawk aims to be relevant to the human being who is using the technology.

Framehawk includes a next-generation Quality of Service signal amplifier plus a time-based heat map for a finer-grained and more efficient identification of workloads. It uses autonomic, self-healing transforms in addition to data compression, and avoids retransmission of data to maintain click response, linearity, and a consistent cadence. On a lossy network connection, Framehawk can hide loss with interpolation, and the user still perceives good image quality while enjoying a more fluid experience. In addition, Framehawk algorithms intelligently distinguish between different types of packet loss. For example, random loss (send more data to compensate) versus congestion loss (don’t send more data because the channel is already clogged).

The Framehawk Intent Engine in Citrix Workspace app distinguishes between scrolling up or down, zooming, moving to the left or right, reading, typing, and other common actions. The engine also manages the communication back to the Virtual Delivery Agent (VDA) using a shared dictionary. If the user is trying to read, the visual quality of the text must be excellent. If the user is scrolling, it must be quick and smooth. And it has to be interruptible, so that the user is always in control of the interaction with the application or desktop.

Framehawk uses a data transport layer built on top of (User Datagram Protocol (UDP). UDP is a small part of how Framehawk overcomes lossiness, as you can see when comparing the performance of Framehawk to other UDP-based protocols. UDP provides an important foundation to the human-centric techniques that set Framehawk apart.

How much bandwidth does Framehawk require?

The meaning of broadband wireless depends on several factors, including how many users are sharing the connection, the quality of the connection, and apps being used. For optimal performance, Citrix suggests a base of 4 Mbps or 5 Mbps plus about 150 Kbps per concurrent user.

Our bandwidth recommendation for Thinwire is generally a base of 1.5 Mbps plus 150 Kbps per user. For details, see the Citrix Virtual Apps and Desktops bandwidth blog). At 3% packet loss, you will find that Thinwire over TCP needs much more bandwidth than Framehawk to maintain a positive user experience.

By default, Framehawk uses a bidirectional User Datagram Protocol (UDP) port range (3224 through 3324) to exchange Framehawk display channel data with Citrix Workspace app. The range can be customized in a policy setting called Framehawk display channel port range. Each concurrent connection between the client and the virtual desktop requires a unique port. For multi-user OS environments, such as Citrix Virtual Apps servers, define sufficient ports to support the maximum number of concurrent user sessions. For a single-user OS, such as VDI desktops, it is sufficient to define a single UDP port. Framehawk attempts to use the first defined port, working up to the final port specified in the range. This applies both when passing through Citrix Gateway, and internal connections directly to the StoreFront server.

For remote access, a Citrix Gateway must be deployed. By default, Citrix Gateway uses UDP port 443 for encrypted communication between the client Citrix Workspace app and the Gateway. This port must be open on any external firewalls to allow secure communication in both directions. The feature is known as Datagram Transport Security (DTLS).

Framehawk/DTLS connections are not supported on FIPS appliances.

NetScaler High Availability is supported from XenApp and XenDesktop 7.12.

Framehawk is disabled by default. When enabled, the server attempts to use Framehawk for user graphics and input. If the prerequisites are not met for any reason, the connection is established using the default mode (Thinwire).

From XenApp and XenDesktop 7.8, an option is available to reconfigure the Firewall during the Features step of the VDA installer. This check box opens UDP ports 3224 through 3324 on the Windows Firewall, if selected. Manual Firewall configuration is required in some circumstances:

To open these UDP ports, select the Framehawk check box: 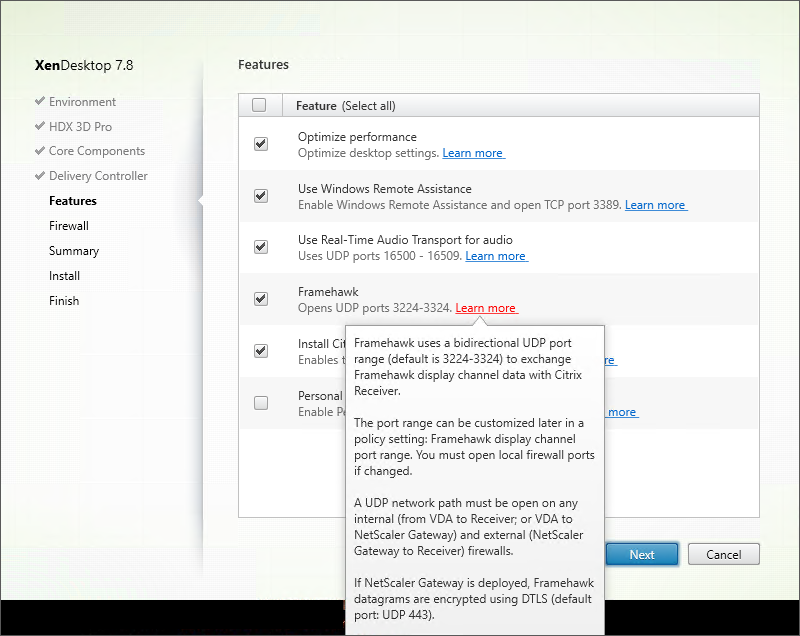 You can also use the command line to open UDP ports for Framehawk using /ENABLE_FRAMEHAWK_PORT:

During installation, you can verify the UDP ports assigned to Framehawk in the Firewall screen: 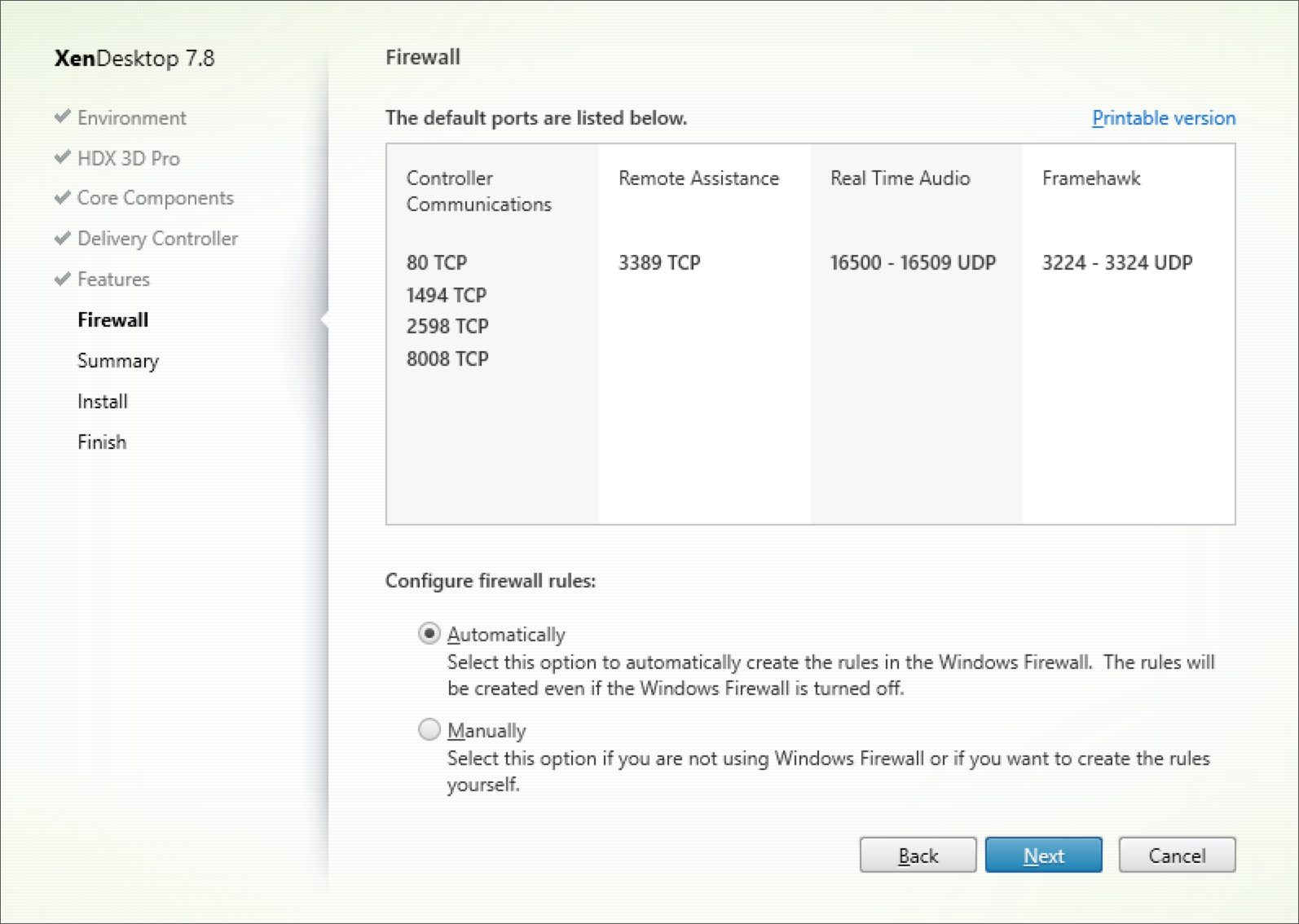 The Summary screen indicates if the Framehawk feature is enabled: 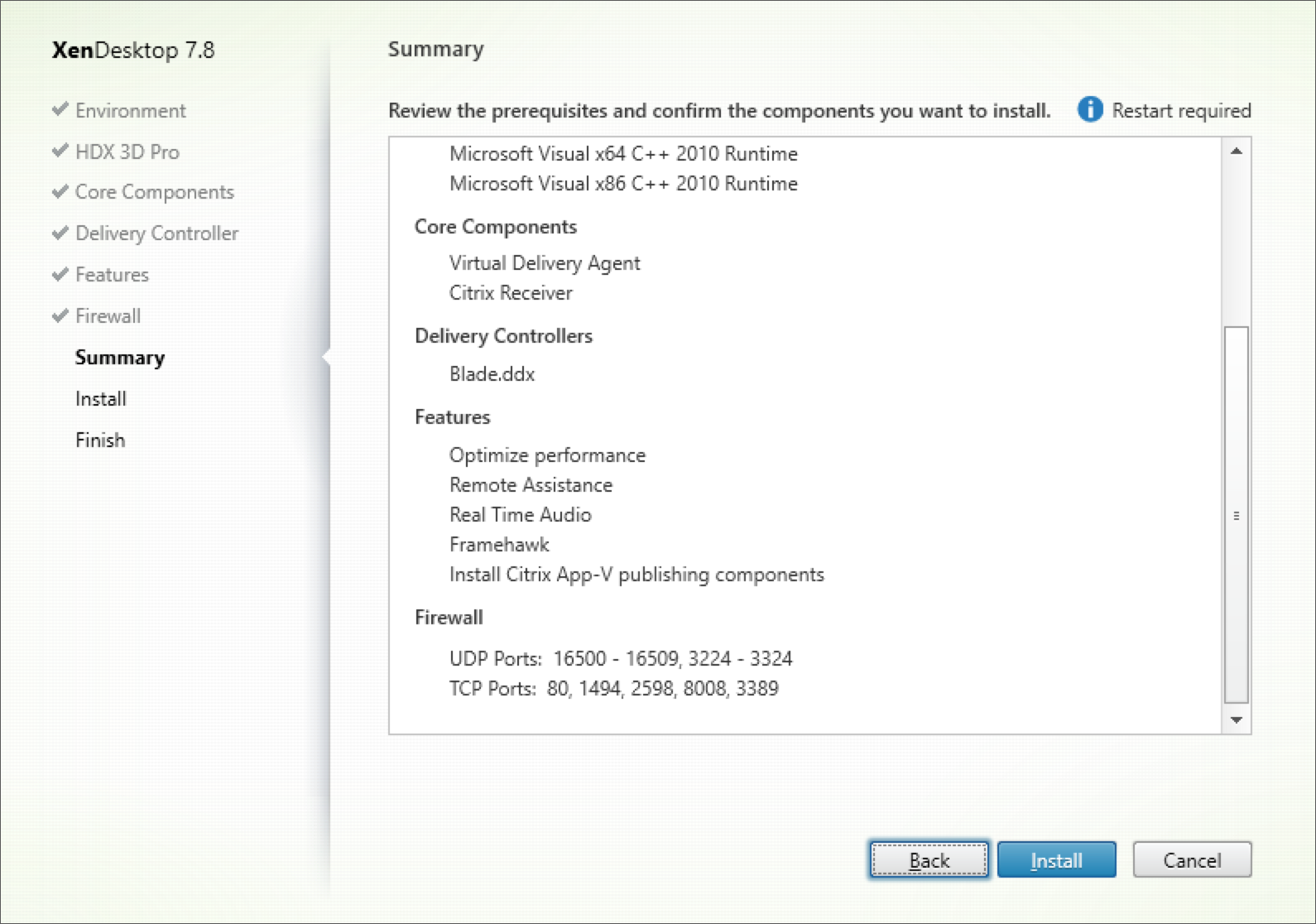 To enable Framehawk support on Citrix Gateway, the DTLS parameter on the Gateway VPN virtual server level must be enabled. After the parameter is enabled and the components on Citrix Virtual Apps or Citrix Virtual Desktops are updated correctly, Framehawk audio, video, and interactive traffic is encrypted between the Gateway VPN virtual server and the user device.

The following scenarios are not supported with Framehawk:

This configuration is required if you are enabling UDP encryption on Citrix Gateway for remote access.

Framehawk is designed for mobile devices such as laptops and tablets using a single monitor, and it reverts to Thinwire in a dual/multi-monitor configuration.

Support for other VPN products

You can monitor the use and performance of Framehawk from Citrix Director. The HDX Virtual Channel Details view contains useful information for troubleshooting and monitoring Framehawk in any session. To view Framehawk related metrics, select Graphics-Framehawk.

If the Framehawk connection is established, you see Provider = VD3D and Connected = True in the details page. It is normal for the virtual channel state to be idle, because it monitors the signaling channel, which is used only during the initial handshake. This page also provides other useful statistics about the connection.

If you encounter issues, see the Framehawk troubleshooting blog.